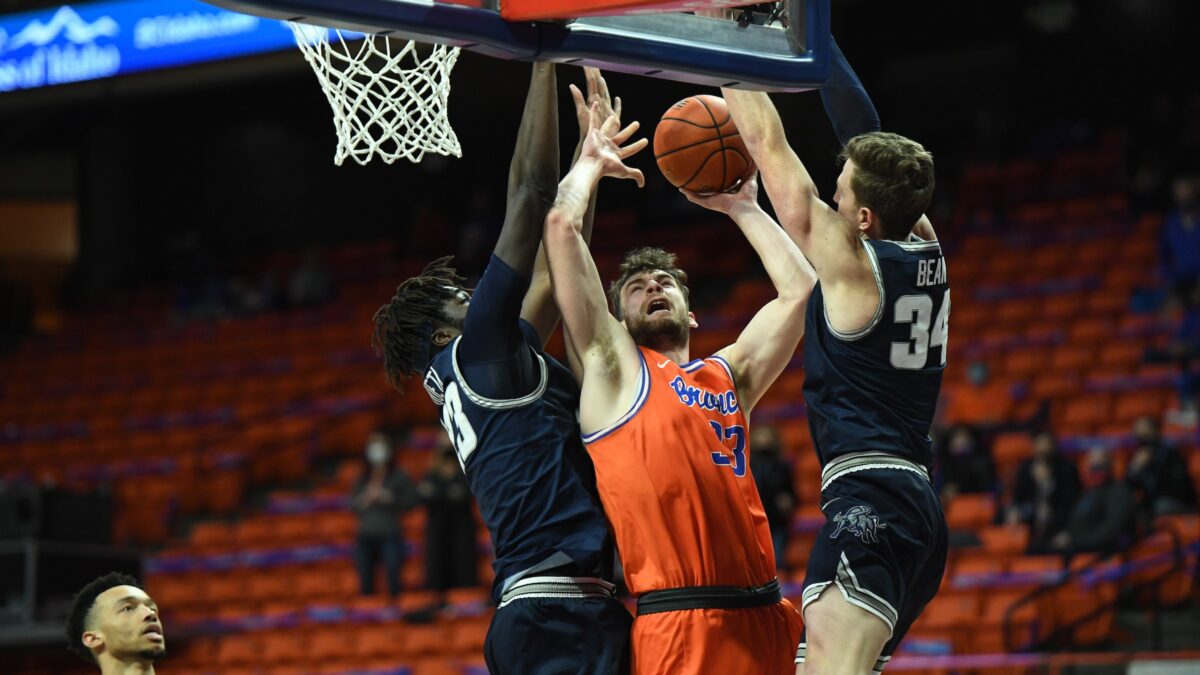 This was first scooped six weeks ago by Jon Rothstein of CBS Sports, but it’s official now. Boise State men’s basketball is one of eight teams set for the 2021 Shriners Children’s Charleston Classic, a major early-season tournament to be played November 18-21. The Broncos will be joined by Clemson, Elon, Marquette, Ole Miss, St. Bonaventure, Temple and West Virginia. The Bonnies are the unsung entry. “This is a significant opportunity for St. Bonaventure—a consensus Top 20 team—to pick up some Quad 1 games,” wrote Rothstein. The same could be said for Boise State. Those Quad 1 matchups are hard to come by for mid-majors.

You can call this event a makegood for the Orlando Invitational, scrapped last November by COVID. That was going to be a really good tournament, keyed by No. 1 Gonzaga. So let’s take the NCAA’s season-ending NET Rankings from last month and compare Orlando with Charlotte. After the Zags, the highest-ranked team was No. 52 Saint Louis. Michigan State, Auburn and Xavier ended up way down the line. The highest-ranked squad in the Charleston Classic is No. 22 West Virginia. St. Bonaventure and Clemson are also rated higher than the Broncos, while Ole Miss is one spot lower. But Temple at No. 160, and Elon, at No. 188, drag the average down. Call Orlando and Charlotte a push.

STIFF COMPETITION FOR THE BRONCOS

I don’t usually track recruits until they actually commit to a school, but it’s hard to ignore Gooding’s Colston Loveland. He’s the top-rated prospect in the state of Idaho and the No. 13 tight end in the country. Recruiting guru Brandon Huffman of 247 Sports reports that Loveland has named his top seven schools from among “offers into the teens.” In alphabetical order: Alabama, Arizona, Arizona State, Boise State, Colorado, Michigan and Oregon State. Loveland has evolved from a 6-0, 170-pound wide receiver as a freshman for the Senators to a 6-5, 230-pound tight end going into his senior year.

It’s not hard to spin this as the most interesting season in Boise Hawks history as they take the field for their season opener Saturday at Ogden. This would be the Hawks’ 35th year, but it’s only their 34th after last season was wiped out by the coronavirus. Here are the vitals. This will be the first time the Hawks have ever played more than 76 games—there are 96 this year as they enter the Pioneer League. This is also the first time since 1989 Boise has played as an independent. The Hawks were independent for their first three seasons before becoming affiliated with the California Angels in 1990. They won five championships during their 33 years in the Northwest League, the last coming in 2004. Anything can happen, but with Gary Van Tol as manager, I like this team’s chances.

Van Tol managed the Boise Hawks in 2013-14 and was in on the ground floor of the careers of future Cubs stars Kris Bryant and Kyle Schwarber, among others. Last fall, several months after the Boise State baseball program was dropped, Van Tol thought he was headed to Longview, WA, to be head coach of the Cowlitz Black Bears of the West Coast League, a collegiate summer baseball league. When the Hawks lost their major league affiliation and left the Northwest League, the club realized the perfect manager for its new world was right under its nose.

MORE POSTSEASON IN STORE FOR HUTCHISON

Chandler Hutchison is in the main draw of the NBA Playoffs. The Washington Wizards routed the Indiana Pacers Thursday night 142-115 in a play-in elimination game to move on as the No. 8 seed against top-seeded Philadelphia. Hutchison played 20 minutes against the Pacers and scored six points on 3-for-4 shooting. The former Boise State star played all of the fourth quarter after the game was in hand. But he was on the floor for seven minutes in the first half in the heat of the battle. It’ll be interesting to see how the Wizards use Hutchison in a best-of-seven series against the 76ers.

Northwest Nazarene is one win away from the GNAC baseball championship after winning Game 1 of a best-of-three series against Central Washington Thursday. The 8th-ranked Nighthawks topped the Wildcats 8-2 as NNU sits on the cusp of its first berth ever in the NCAA Division II Championships. In softball, the Nighthawks’ season came to an end in Irvine, CA, with a 4-3 loss to Biola University and a 9-0 defeat to Concordia Irvine in the NCAA Division II West Regional. NNU finishes 31-14, tying the program record for victories.

May 21, 2014: After 44 seasons as Bronco Stadium, the facility that houses the blue turf becomes Albertsons Stadium with the announcement of a 15-year, $12.5 million naming rights agreement with the Boise grocery giant. Boise State was seeking more revenue as cost-of-attendance scholarships were on the horizon, while Albertsons’ new ownership was seeking to re-establish the company as a community leader eight years after the heart of it was sold to SuperValu. It had been just over a year since Albertsons LLC had bought the core of the company back. 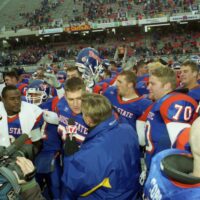 This Day In Sports: Broncos-Vandals in the Big West’s swan song