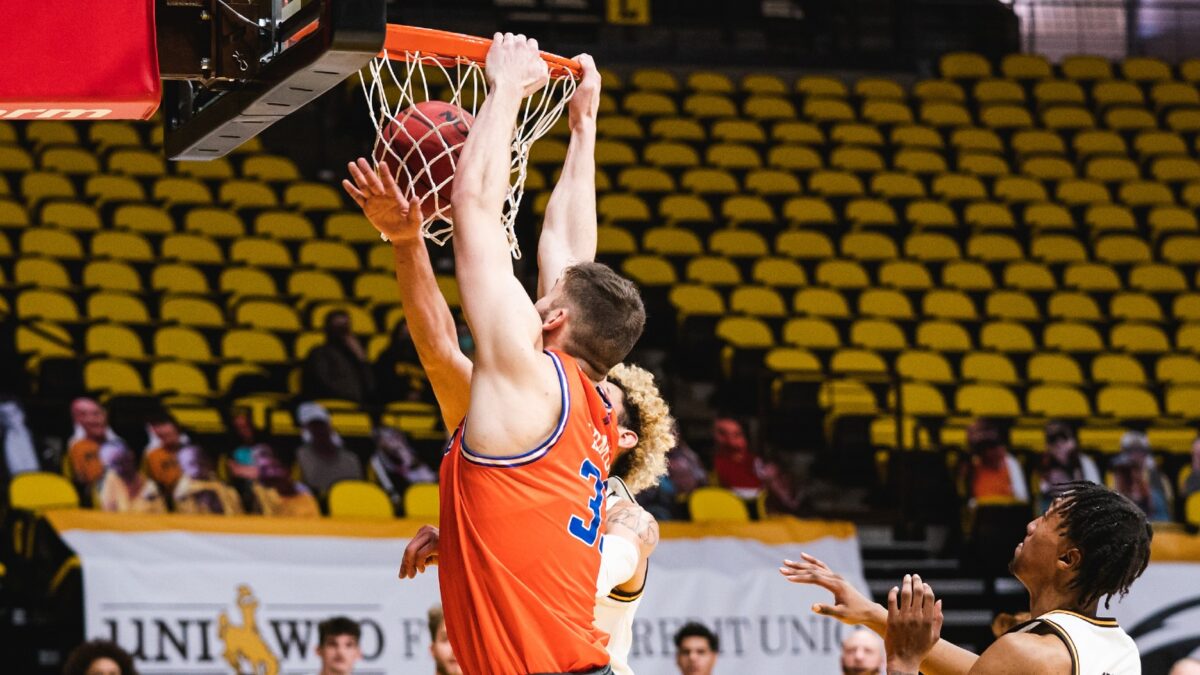 Another game without Emmanuel Akot, another rout for Boise State. The Broncos just stayed the course, completing the sweep of Wyoming Wednesday night with a 90-70 win in Laramie to become the first team in school history to start a conference season 8-0. They also extended their school-record winning streak to 12 games. Boise State could hardly have been hotter out of the gate. Derrick Alston, back on the floor after turning his ankle Monday night, drained a three-pointer just 13 seconds into the game, and the Broncos didn’t look back. They made 13 of their first 16 shots and shot 61 percent in the first half to build a 55-33 lead. Boise State would have easily hit the century mark had it not gone seven minutes in the second half without a field goal.

This game was all about balance, which Boise State has. There were six Broncos in double-figures—Devonaire Doutrive scored 17 points, Abu Kigab 15, Alston and RayJ Dennis 14, Marcus Shaver Jr. 12 and Mladen Armus 10. Doutrive put up 38 points in the two wins over the Cowboys, and you get the feeling he’s just getting started. Boise State’s defense continues to be outstanding, even without Akot, its best defender. Using their length and quickness, the Broncos seal the perimeter, choke the passing lanes, and blanket opponents in the paint. Example: Kigab. He was all over the floor, contesting rebounds and going after loose balls. Boise State doesn’t play again until next Wednesday. The bruised Kigab could use this time off.

It doesn’t take much research to figure out that Frank Maile is a players’ coach. Andy Avalos continues to move quickly, hiring Maile Wednesday as his assistant head coach and defensive line coach. Maile was the interim coach at Utah State after Gary Andersen stepped down last fall. And when Maile applied for the head coaching job, USU president Noelle Cockett allegedly made disparaging remarks about Maile’s Polynesian heritage and religious background. Players felt Maile was unfairly eliminated from the candidates’ pool and revolted, refusing to play in the Aggies’ season finale at Colorado State.

Maile was beloved in Logan, serving as assistant head coach there for five years, three of them under Matt Wells. He does, in fact, have one head coaching win under his belt. Maile was USU’s interim coach in the 2018 New Mexico Bowl when the Aggies routed North Texas 52-13 after Wells had departed for Texas Tech. He served as Utah State’s co-defensive coordinator this past season, so he’s prepared to merge minds with Spencer Danielson.

PERCEPTION ON PLOUGH MAY NOT BE REALITY

Tim Plough, Boise State’s new offensive coordinator, met the local media for the first time Wednesday. Plough’s most jarring statement: “I’ve had a saying for a long time that we’re not even going to look at the scoreboard until we have half a hundred.” You can tell he’s been hanging out with Dan Hawkins the past three years. No doubt this will be an attacking offense. UC Davis amassed the most passing yards in the FCS over the past three seasons, but Plough doesn’t want fans making assumptions. “A lot of times I get saddled as ‘the passing guy,’” he said. “But it’s going to be a balanced offense. We’re going to attack the defense and make them react to us.”

Chuck Pagano is sure to be hanging out in Boise again soon. The veteran coach has retired as defensive coordinator of the Chicago Bears after two seasons. Pagano’s first year saw the Bears lead the NFL in scoring defense. His unit faded a bit this season but still helped the Bears back into the playoffs last week. Pagano was head coach at Indianapolis for six seasons, going 53-43 before being fired three years ago. He spent most of 2018 in Boise, where he owns a home and has family; his wife is the former Tina Heffner, sister of former Boise State wide receiver Terry Heffner. The couple met when Pagano was coaching Broncos linebackers in 1987-88. He’s never lost his affinity for Boise.

NOT A HOT TAKE

I sounded like a really smart person Wednesday, as it turns out. But it wasn’t rocket science. I said, “Count on a jump-start from Jade,” predicting that Boise State’s Jade Loville would bounce back from her two-point, 1-for-9 shooting performance in Monday’s win over Wyoming. It happened, as Loville put up 22 points to help the Bronco women finish a sweep of the Cowgirls with a 68-62 win. Much like Monday’s game, it was not easy for Boise State. Wyoming tied the game on a three-pointer with 3:45 left, but Loville answered with a pair of free throws to give the Broncos the lead back for good. She made two more freebies with 30 seconds left that led to the final cushion.

January 14, 1968: The Green Bay Packers win the Super Bowl for the second consecutive year, dropping the Oakland Raiders, 33-14. It would be Vince Lombardi’s final game coaching Green Bay and would mark the end of the Packers dynasty. And it produced another famous picture of former Idaho Vandal great Jerry Kramer—helping carry the victorious Lombardi off the field at Miami’s Orange Bowl. Lombardi was the Packers’ general manager for the rest of 1968 before leaving to coach Washington in 1969. He passed away at the age of 57 in 1970.

A McWin is a McWin, especially this one 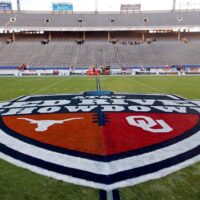