Boise State, of course, lost running back Alexander Mattison and quarterback Brett Rypien to the NFL this year. The saving grace as the Broncos broke in new starters at those positions was to be the offensive line, which returned all five starters from 2018. Not that it can’t still happen, but that group hasn’t yet found its groove. BYU, with its struggling rush defense, was maybe going to be the tonic last Saturday. But the Broncos had a normal night on the ground with 174 yards, not what they were hoping for. Boise State remains right in the middle of the 130-team FBS—exactly where it was a week ago—as the Broncos are ranked 65th in both rushing yards per game at 167.6 and yards per carry at 4.3. Should the run game finally explode, the team’s November-December dynamic could change dramatically.

Incidentally, the Broncos have a third O-lineman in their 2020 recruiting class. Riden Leong, a massive 6-5, 320-pounder, committed to Boise State on Monday. Leong will be a junior college transfer from Orange Coast College. He also had offers from TCU, Iowa State and Hawaii, among others, and the latter one is ironic. Leong made his official visit during the Broncos’ 59-37 win over the Rainbow Warriors, and he hails from Hawaii. Leong’s an offensive tackle, and it’s not lost on anyone that Boise State’s current left tackle, Ezra Cleveland, could leave for the NFL after this season (although Cleveland may really benefit by staying one more year).

Boise State’s quarterback issues involve traditional things: an injury, a couple interceptions by a backup—things like that. What’s going on elsewhere in the Mountain West is strange indeed. After two consecutive starts at Nevada, coach Jay Norvell is taking well-traveled QB Malik Henry off the field “so he can continue to focus on academics and his life outside of football.” Norvell said Henry is not suspended, but that the team will go with Christian Solano and Carson Strong as its quarterbacks as it prepares for Wyoming on Saturday. And at New Mexico, coach Bob Davie announced Tuesday that starting QB Sherrion Jones is suspended “indefinitely.” Davie didn’t give a reason. The Lobos host Hawaii Saturday.

AND HERE COME THE AZTECS

They beat Weber State 6-0 in their season opener (and lost 23-17 at home to Utah State). The San Diego State Aztecs don’t win pretty, but they’re winning, and suddenly they’re the team to beat in the West Division of the Mountain West. SDSU is 3-1 in conference after its 27-17 win at San Jose State Saturday. Second is Fresno State at 1-1. The Aztecs play at UNLV Saturday. Hawaii is doing a quick fade at 1-2 in the MW following the 56-26 thumping it suffered from Air Force. And now the Rainbow Warriors are down one key wide receiver, as coach Nick Rolovich has booted Melquise Stovall off the team. Stovall had 18 catches for 248 yards and four TDs this season, two of them on the blue turf 10 days ago and the other two just last Saturday. He had eight receptions for 114 yards against Boise State.

Senior defensive back Lloyd Hightower had only two tackles in Idaho’s 45-21 rout of Idaho State, but that wasn’t the point as he was named Big Sky Defensive Player of the Week. Hightower was a game-changer for the Vandals. He scored on a 45-yard interception return in the first quarter to give Idaho a 14-0 lead. Then in the third quarter, Hightower scooped up a fumble and raced 49 yards for a TD. That gave the Vandals some important separation (at 38-21) after the Bengals had narrowed the margin to 10 points. Idaho has a bye this week before hosting Cal Poly in the Kibbie Dome on November 2.

ESPN NFL Insider Adam Schefter tweeted Tuesday that—“per source”—the Arizona Cardinals have passed on Jay Ajayi and are signing veteran running back Alfred Morris to tide them over while David Johnson’s ankle heals. Ajayi proclaimed himself fully healthy early this month but apparently didn’t convince the Cardinals he was the guy after a two-day tryout. It’s hard to fathom the former Boise State star not getting another NFL shot at the tender age of 26. Morris, who will be 31 in December, played for San Francisco last year and rushed for 428 yards and two touchdowns.

HUTCH ON THE SHELF

The Chicago Bulls open the NBA season tonight at Charlotte, but they’ll do it without Chandler Hutchison. The former Boise State star remains sidelined by a hamstring injury he suffered the first week of September. The longer Hutchison is off the floor, the harder it might be to get minutes once he gets on. Bulls coach Jim Boylen seems to have identified a 10-man rotation. “I don’t (have a timetable on Hutchison),’’ Boylen told the Chicago Sun-Times’ Joe Cowley. “(Hamstring injuries are) just tricky.’’ Chicago has hardly given up on Hutchison, though. The Bulls exercised their fourth-year option on him Monday.

DEPENDABILITY BETWEEN THE PIPES

Idaho Steelheads netminder Tomas Sholl played only one game last week, but it was enough to earn ECHL Goaltender of the Week honors for the second time this season. Sholl faced Wichita last Friday in CenturyLink Arena as the Steelheads picked up a 2-1 overtime win, turning aside 24 of the 25 shots he faced. Sholl becomes the first Steelie ever to win the ECHL award in back-to-back weeks twice (he also did it in March of last year). Idaho, meanwhile, is 4-0 for the first time in 10 years.

October 23, 1976: In a 45-0 defeat of Navy in Annapolis, Pittsburgh running back Tony Dorsett breaks the all-time college rushing record of Ohio State’s two-time Heisman Trophy winner, Archie Griffin. Dorsett eclipsed the mark on a 32-yard touchdown run. That same day, Dorsett would also become the first player ever to run for over 1,000 in four different seasons. He’d go on to total 6,082 career rushing yards and would win the Heisman himself later that year. Dorsett’s record was later broken by Ron Dayne and Ricky Williams—and it’s now held by former San Diego State star Donnel Pumphrey with 6,405 yards. 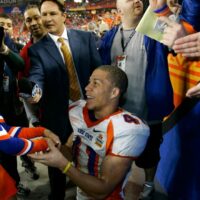 The Bulldogs bark from beyond the arc 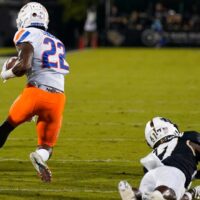