Whatever concerns Boise State coach Bryan Harsin expressed going into fall camp, the offensive line wasn’t one of them. The group essentially returns four starters: Ezra Cleveland, John Molchon, Eric Quevedo and Garrett Larson. But last September, the unit was really green, to the point that the ESPN crew mentioned its lack of communication during a brutal first quarter at Washington State. Longtime Bronco offensive line coach Scott Huff had resigned just before spring football in 2017 to go to Washington, and new O-line coach Brad Bedell had been thrown into the fire. But after the discouraging loss to Virginia, Bedell and his troops resolved to circle the wagons. It was most noticeable in sacks—13 of them allowed over the first four games, and just 16 yielded over the final 10 contests.

KTVB’s Will Hall has been a solid fall camp tweeter. He started with this last Thursday as the media met with assistant coaches, including Boise State defensive coordinator Andy Avalos: “(I) ask Coach Avalos every year on this day to give us a newcomer/waiting-in-the-wings guy he’s excited to see have more reps. Two years ago it was Blake Whitlock. Last year it was Benton Wickersham. This year? Eyes lit up and (he) said safety Tyreque Jones.” Ah, yes. At 6-2, 197 pounds, Jones will be a presence in the secondary, and he’ll pick up a lot from mentors Kekoa Nawahine and DeAndre Pierce. Jones produced a textbook pass deflection in the spring game—a standout play that had fans checking their roster sheets for No. 21.

No reason to panic over Boise State’s recruiting class. After all, the 2019 group still features a pair of four-star recruits, quarterback Hank Bachmeier and “athlete” Casey Kline. And it’s still early. But the Broncos lost a good one yesterday when linebacker Alec Pell flipped his commitment to Colorado. The fact that it’s a home-state move makes it a little easier to stomach for Boise State—Pell is from Englewood. These things happen. But his decommit leaves the Broncos with just four verbals for 2019 after the first week of August. Pell had been Boise State’s first verbal back in April. “I can’t wait to stay home and be in Boulder,” said Pell’s tweet. This time, it’s final. “Please respect my decision,” he added.

Beware those Bulldogs. Fresno Bee columnist Marek Warszawski kicked off Fresno State fall camp by encouraging Bulldog fans to “let their imaginations run wild.” Quaterback Marcus McMaryion, a “stellar back seven” on defense, coach Jeff Tedford, “winnable games” at Minnesota and UCLA. Warszawski says it all sets up nicely. “Picture this,” he writes. “The Bulldogs steamroll through their schedule and cap a dream season by accepting a bid to a New Year’s Six bowl against a brand-name program. Yes, that could actually happen.” Fresno State just needs to avenge that bitter, unjust night on the blue turf last December and win the Mountain West. “Might as well make hotel reservations in the Phoenix area the week between Christmas and New Year’s. If you have to cancel, so what?”

It’s already NFL season No. 4 for Jay Ajayi. The Philadelphia Eagles running back hasn’t had the sustainability to be considered among the league’s elite yet. And even if Ajayi feels he has, he keeps hearing about being in a division with Ezekiel Elliott and Saquon Barkley. “I’m ready to showcase again to the world who I am as a running back,” said the former Boise State star as Philly convened its camp. “At the end of the day, I do feel like the world’s forgotten about the kind of player that (I am) when I’m playing at the best of my abilities.” Still, one fan site claims the Ajayi trade from Miami last year “is slowly evolving into one of the top deals in Eagles history.” He helped Philadelphia to a Super Bowl championship, and all it cost the Eagles was a fourth-round draft pick.

Two former Broncos are part of what ESPN.com calls the “top NFL training camp position battles.” This is a pivotal camp for Darian Thompson as he tries to win the free safety spot with the New York Giants. “The battle is a free-for-all,” writes Jordan Raanan. “It’s a massive mix that includes Thompson, Curtis Riley, Andrew Adams and Michael Thomas. All are getting time with the first-team defense. All except Riley have starting experience. May the best safety win.” In Washington, it’s cornerback. “Who will start opposite Josh Norman?” asks John Keim. “Orlando Scandrick has spent the spring and summer as the No. 2 corner, but he also plays inside vs. three-receiver sets. If the Redskins are concerned about Scandrick’s durability, they could start Quinton Dunbar and play Scandrick in nickel packages.”

Chandler Hutchison is enjoying some down time before things get ultra-serious in his rookie year with the Chicago Bulls. He was at Wrigley Field Saturday in a custom-made “Hutchison 15” Cubs jersey given to him by the team. Reviews of the former Boise State star in the NBA’s Las Vegas Summer League last month have been generally positive. Stephen Noh of The Athletic noted that Hutchison was overshadowed by the big-time performance of No. 7 overall pick Wendell Carter Jr. out of Duke. Noh praised Hutchison’s three-point shooting, rebounding, ball-handling in transition and unselfish passing. His areas of concern? Finishing over NBA big men and staying control on his drives. You can expect improvement. “The Bulls have said Hutchison is extremely coachable, and that’s working in his favor,” wrote Noh.

Troy Merritt did indeed fly to St. Louis Sunday, two days after emergency surgery on a blood clot in his left arm at St. Alphonsus. Merritt still harbors hope of playing in the 100th PGA Championship beginning Thursday. “If I don’t think I can finish the golf tournament, I’m not going to tee it up and take a spot from another deserving player,” Merritt said yesterday on Idaho SportsTalk. His plan is to try to chip and hit pitch shots today. “I don’t know if I can, to be quite honest,” said Merritt. “But that’s my goal.” He could feel the effects of the clot even while he was winning the Barbasol Championship 2½ weeks ago. It really bothered him in the next event, the Canadian Open. Merritt thanks his wife, Courtney, for ultimately steering him to get it checked. “I probably wouldn’t have gone in (were it not for her),” he said.

The Giants’ Barry Bonds gets it done at home in San Francisco, the one place where most fans still cheer him. Bonds launched his 756th career homer to become baseball’s Home Run King, passing Hank Aaron. It was a 435-foot shot over the right-centerfield wall at AT&T Park off Washington’s Mike Bacsik. Commissioner Bud Selig was not in attendance, nor was Aaron himself, speaking volumes about how history may judge Bonds’ accomplishment. 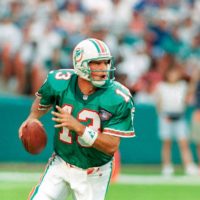