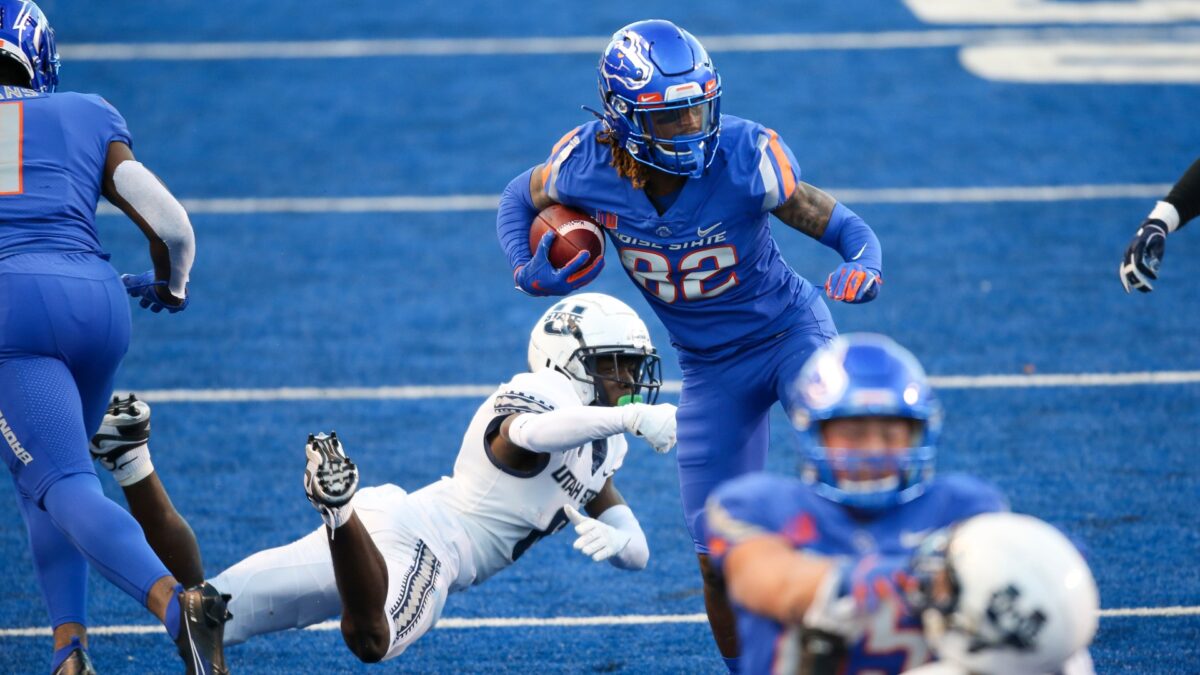 It’s gotten to the point that if Stefan Cobbs is not the breakout wide receiver for Boise State this season, it’ll be a colossal disappointment. Cobbs’ name came up all through spring football. It came up last week as coach Andy Avalos previewed fall camp. And it came up again Sunday, a few practices into camp. Who’s going to mesh with Khalil Shakir and CT Thomas to take the wide receiver corps over the top? “I think Stef Cobbs is that guy,” said quarterback Hank Bachmeier. B.J. Rains of the Idaho Press tweeted that Bachmeier soundbite, and cornerback Markel Reed had the crowning response: “He is that guy lol i go against it everyday.” Stefan Cobbs. Junior from Fort Worth, TX. With seven career catches for 129 yards and a touchdown. Is the hype real? Is the sky the limit? Here we go.

LIVING UP TO HIS LAST NAME

There’s another nugget of information that casts the Boise State tight end position in a whole different light. That spot already has a nimble, emerging standout in former quarterback Riley Smith, who had more catches, yards and touchdowns than Washington Football Team draft pick John Bates last season. It also has a more traditional body at that position in Tyneil Hopper, who had the first two receptions of his career last year. But now you have running back George Holani claiming that former Borah High star Austin Bolt has the fastest 40-yard dash time on the team.If that’s true—if Bolt is even faster than the Broncos’ wide receivers and cornerbacks—he could redefine the tight end position. There would be nothing better for local fandom than a big-time Bolt breakout this season. Tim Plough would be fine with that, too.

WAITING IN THE BACK OF THE LINE

Before Boise State or any other Group of 5 team thinks of weaving its way into the Power 5 in this round of conference realignment, it has to let the big boys sort things out. Max Olson of The Athletic notes that the three remaining Texas schools in the Big 12, TCU, Texas Tech and Baylor, are in contact with the Pac-12 and would entertain bringing Oklahoma State along for the ride. “The possibility of the Pac-12 preferring to add two or four of these Big 12 members can’t totally be ruled out,” writes Olson. “There’s a sense of optimism among these schools, sources say, that a spot in the Pac-12 could eventually be on the table. Oklahoma State would still be a logical fit in that bundle, given its 90-38 record in football over the past decade, 12th-best in the FBS.”

JESSUP STARTS, ALSTON OFF THE BENCH

Former Boise State standout Justinian Jessup started for Golden State Monday night in the Warriors’ first Las Vegas Summer League game. Jessup’s meal ticket is his three-pointer, but he’s still struggling, going 1-for-5 from deep in a 91-89 overtime loss to Orlando. He scored seven points in 26 minutes, but he did have five rebounds and three assists.Jessup and former Broncos teammate Derrick Alston were on the floor together for a bit. Alston played 15 minutes off the bench and scored five points, including a three-pointer. His one assist was a nice dish to Jessup for a short jumper. Chandler Hutchison, who was traded to San Antonio just last Friday, is not on the Spurs summer league roster. At least not yet.

YET ANOTHER FAMILIAR STEELIE ABOARD

Forward Zack Andrusiak is the latest Idaho Steelheads mainstay to find his way back to Boise after the abandoned 2020-21 season. Andrusiak bided his time last winter by playing 22 games with the ECHL’s Orlando Solar Bears after a solid rookie year with the Steelheads two season ago. “It was a tough year not being able to play (in Idaho) last year,” said Andrusiak. “We were really excited to get the season going, so it was a tough pill to swallow. I’m pumped to get back there and in front of those fans.” Andrusiak began his professional career with the Steelheads during the pandemic-shortened 2019-20 campaign and tallied 23 points (10 goals, 13 assists).

HAWKS DETONATE IN THE SEVENTH

The Boise Hawks trailed 5-4 going into the seventh inning at Grand Junction Monday night. Then Jason Dicochea led off the seventh with a home run, and the game was tied. That was only the beginning. The Hawks would score a staggering 12 runs in the inning on the way to a 17-7 romp. Alejandro Rivero blasted a grand slam, and Nate Fisbeck did it again, clubbing a three-run homer in the middle of the barrage. It was fifth home run of the series. Fisbeck was 3-for-6 on the night with five RBIs, upping his average to .425 in his nine games with Boise.

Boise bowled over Damen Amendolara three years ago when the CBS Sports Radio morning host and sidekick Mraz visited for a few days leading into Boise State’s game against San Diego State. So much so that D.A. is coming back this season to spend an entire week here during the Oklahoma State game. KTIK listeners flocked to celebrate the 2018 appearance with him. This time Amendolara is using the extra time to do Idaho outdoor things, especially fishing, he says. He’ll also do the D.A. Show from the KTIK studios from Tuesday, September 14, through the Monday after the game. Mraz (Shawn Morash) can’t make it out this time—his wife is seven months pregnant. But show contributor Andrew Bogusch will be along. Good times ahead.

August 10, 2011, 10 years ago today: Boise State president Bob Kustra announces that athletic director Gene Bleymaier is being relieved of his duties after almost 30 years at the helm. Kustra pointed to the ramifications of an NCAA investigation into the Bronco program as the core issue. Bleymaier masterminded the installation of the blue turf in 1986, guided Boise State into Division I-A in 1996, and oversaw a football program that became one of the sport’s biggest stories of the new century, with a regular spot in the Top 25 and, at that point, two Fiesta Bowl victories. Ironically, Bleymaier will be inducted into the Boise State Athletics Hall of Fame this fall. 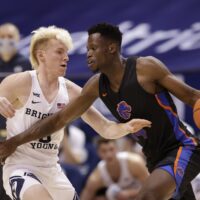