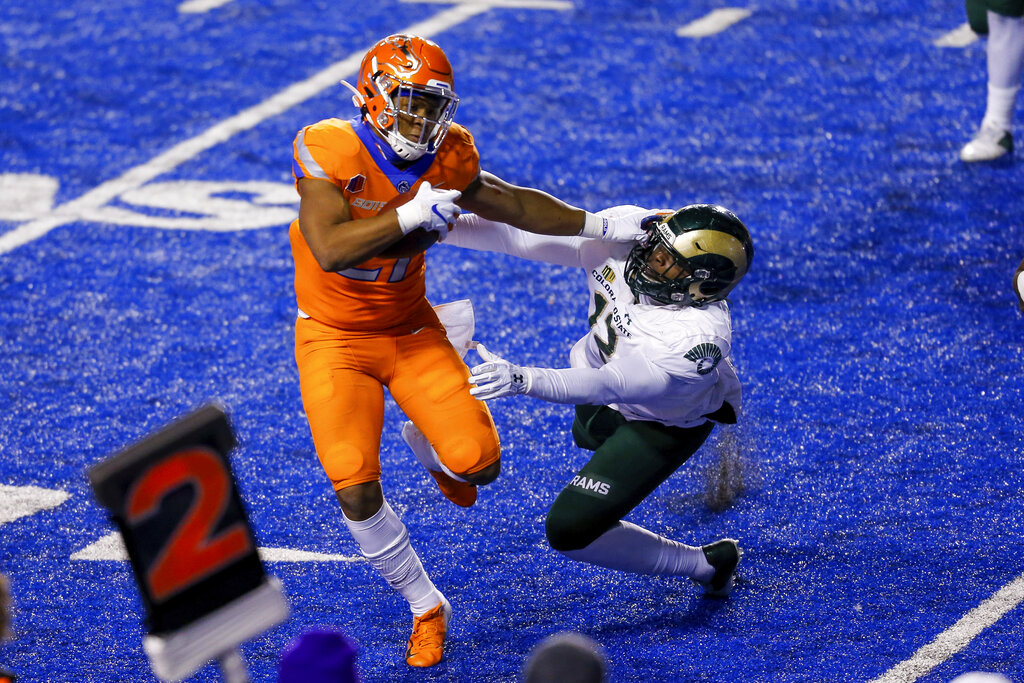 San Diego State rushed for 326 yards against Hawaii last Saturday while beating the Rainbow Warriors 34-10. Boise State won’t have the luxury of that type of running game this Saturday in Aloha Stadium. There are no signs that George Holani is ready to return after his first-quarter injury at Air Force, so Andrew Van Buren it is. Van Buren has rushed for 168 yards in four games, averaging only 3.4 yards per carry (albeit with five touchdowns). There’s still really nobody behind him. Coach Bryan Harsin appreciates Van Buren and the predicament he’s been put in. “It’s not just Andrew,” said Harsin. “There’s a lot of other factors.”

Danny Smith saw his first action of the season for Boise State last Thursday versus Colorado State but gained just 33 yards on 10 carries. Tyler Crowe, the walk-on from Skyview, had one attempt for one yard. You could say, “The Broncos sure could use Robert Mahone right now,” but there were extenuating circumstances with the departed senior-to-be. In August, Mahone became persona non grata in the program after an arrest for domestic battery or assault enhancement in the presence of a child. Serious stuff. He already had one strike left over from 2018, when he was declared academically ineligible for the First Responder Bowl. Mahone entered the transfer portal in late September.

Boise State normally travels on Thursday for games at Hawaii in order to acclimate to the time and weather changes—and get in some leisure time. This time the Broncos will depart Friday. “There’s really nothing to do; we’re just going to be in the hotel,” Harsin said of the strict protocols in the 50th state. “We have to be respectful of what they’ve asked us to do.” Which is basically to play the game and go home. They are serious about coronavirus on the islands. Hawaii had 95 new COVID-19 cases reported Monday. Idaho was at more than 11 times that number, and the states have similar-sized populations. The good news regarding this Saturday’s game: “It’s not in jeopardy right now,” said Harsin.

Harsin is talking like Hank Bachmeier will be in the lineup again at Hawaii. I mean, you never know. But Bachmeier looked like a guy who was getting his football legs back under him last Saturday after missing two games. He was 16-of-28 for 202 yards and a touchdown with no turnovers. “It was a lot different (with Bachmeier back),” said Harsin. “He operated the offense like it should be. Our execution can be better—our execution will be better.” Bachmeier stirred memories of early last season with his performance on third down. Boise State converted 7-of-9 in the first half (while Colorado State was 0-fer in eight attempts). Bachmeier zeroed in on the third down wizard. CT Thomas had six catches for 103 yards on the night, all of them on third down. Five of them moved the chains.

Boise State’s Avery Williams did not have a single tackle against Colorado State last week. But Williams swamped the box score otherwise, and he is Mountain West Special Teams Player of the Week. How could it have gone any other way? Williams, of course, blocked two punts that turned into touchdowns (one that he did all by himself). He set up two other Broncos TDs while returning seven punts for 85 yards. Williams leads the nation among active players with seven career non-offensive touchdowns. Teammate Kekaula Kaniho is fifth on the list with four (with a nod here to statmaster Jay Tust of KTVB).

RYPIEN IN THE BULLPEN

Twitter was alive with Boise State fans Sunday wondering why Denver coach Vic Fangio wouldn’t at least give Brett Rypien a shot after quarterback Drew Lock threw four interceptions against the Las Vegas Raiders. Turns out Rypien may get a chance this Sunday against Miami if Lock can’t bounce back from his bruised ribs. Lock took a blindside hit to the midsection in the second quarter of the 37-12 loss to the Raiders and winced through the rest of the afternoon. Fangio doesn’t want to bench Lock, but if he can’t practice Wednesday, his availability for the Dolphins game will be in doubt. Rypien has taken one snap since he won his first career start against the New York Jets on October 1.

THE ‘BIG DANCE’ WALTZES AWAY

It had nothing to do with Idaho’s new transgender law and everything to do with the coronavirus. The NCAA Tournament won’t be making its 10th visit to Boise next March, as the entire 2021 tournament will be played at one location. Odds are that it’ll be in Indianapolis. Bob Carney, Boise State’s interim athletic director, was also 2018 NCAA Tournament Director for the Boise first- and second-round site. “We are obviously incredibly disappointed, but understand the decision to move the NCAA Tournament to a single geographic area for 2021,” said Carney. It’ll be nice if there is March Madness next year, no matter where it is. But for Boise, it is not a postponement—we may never see the tournament again

November 17, 1984: The Idaho Vandals hand Boise State the first shutout in Bronco history, winning 37-0 in Bronco Stadium. The victory saved a third straight winning season for coach Dennis Erickson and the Vandals, who were 2-5 in mid-October but finished the year with four straight victories. The shutout remains one of only two ever suffered by Boise State—the other was at Washington State in 1997. The Broncos have now gone 297 games without one, the ninth-longest streak in the country. 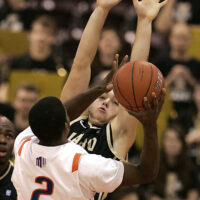