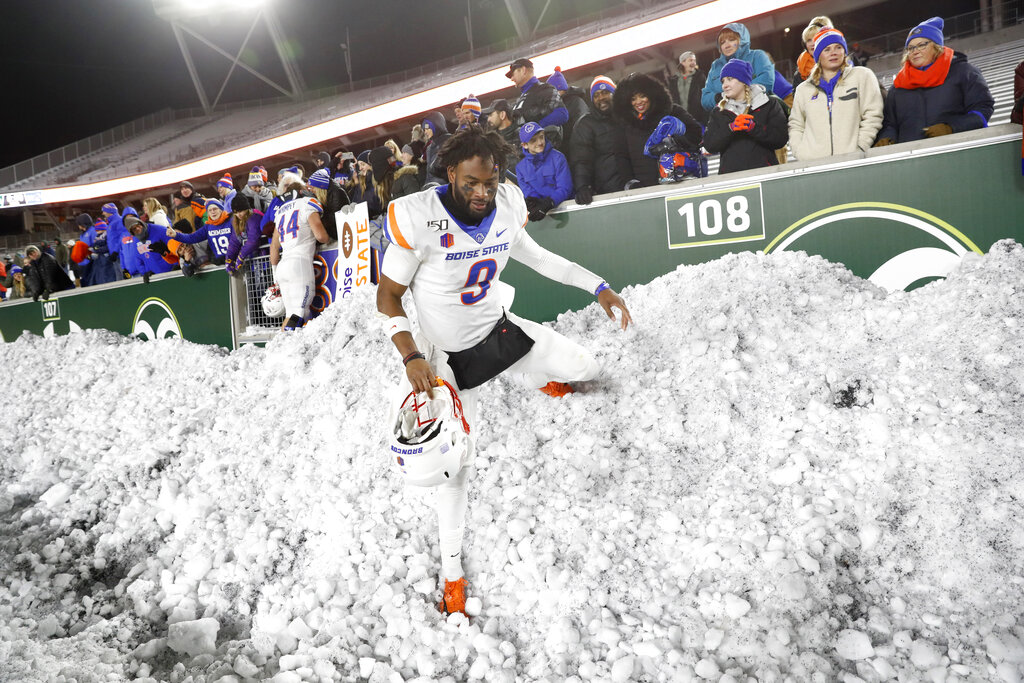 Considering what college football teams have gone through in 2020, anything that happened in 2019 pales in comparison. But Boise State and Colorado State faced adversity going into their matchup the day after Thanksgiving last year in Fort Collins. A blizzard had buried Canvas Stadium, and crews cleared out enough space to get just 12,324 fans in the place. So the lack of atmosphere Thursday night in Albertsons Stadium won’t be out of the ordinary. The temperature at kickoff was 24 degrees, but the Broncos survived it, winning 31-24 to clinch a spot in the Mountain West championship game. It was a grind that started badly, though—the Rams matched 75 yards in nine plays on their first possession to take a 7-0 lead. And a No.3 quarterback had to save the day (Jaylon Henderson).

Colorado State fired coach Mike Bobo shortly after that game and replaced him with Steve Addazio. But Addazio has a couple of the same offensive weapons that gave Boise State fits last year. Quarterback Patrick O’Brien threw for 289 yards and two touchdowns (with two interceptions) against the Broncos, and tight end Trey McBride pulled in nine catches for 101 yards. Late in the third quarter, the duo hooked up on a 28-yard TD pass that pulled the Rams to within 24-21. “(McBride) is as good of a tight end as we’ll see,” said coach Bryan Harsin this week. “(O’Brien) is a Josh Allen-type guy that’s got a lot of tools.” O’Brien and McBride were at the core of CSU’s big win over Wyoming last Thursday.

DON’T HOLD YOUR BREATH FOR HOLANI

Here’s another leftover factor from last year’s Colorado State game. The Broncos struggled to run the ball, netting just 91 yards and averaging only 2.5 yards per carry. And that was with George Holani, who was held to 42 yards on 18 attempts. Now, there’s this tweet from B.J. Rains of the Idaho Press: “Hearing Boise State running back George Holani is doubtful to play Thursday night against Colorado State.” This season, three games old, is already somethin’ else. The only scholarship running back behind Holani remains Andrew Van Buren. If neither Hank Bachmeier nor Jack Sears is available at quarterback, let’s just say the stars aren’t aligning for the Broncos.

A CURRENT BRONCO HAS AN EDGE

We’re in the final 24 hours of voting for the return man on Boise State’s All-Decade Team. The candidates are Avery Williams, John Hightower and Shane Williams-Rhodes. The envelope, please (mine, anyway)? If you go on body of work, Williams is the guy, with six career touchdowns on punt and kickoff returns combined. he current senior and reigning Mountain West Player of the Year has been a game-changer. Not forgetting two plays here: the 47-yard kickoff return by Williams-Rhodes that set up the winning field goal against Washington in the 2012 Las Vegas Bowl, and Hightower’s electric 98-yard kickoff return for a TD versus Portland State last year.

Heather Dinich at ESPN Insider details “The path to the College Football Playoff for all 12 contenders,” and she has BYU at No. 8 on her list. “According to ESPN’s FPI (Football Power Index), no team in the country has a better chance to finish this season undefeated than BYU (89%). This puts the Cougars in prime position to join the highest-ranking Group of 5 champion in a New Year’s Six bowl.” Being an independent makes it tougher for BYU to get a bid to a New Year’s Six bowl—the Cougars can’t get an automatic one. But did you know this? Writes Dinich: “Because BYU is an independent, it’s treated just like Notre Dame is during a typical season, so if the Cougars are ranked within the top 12, they are likely to earn a spot in a more lucrative bowl.”

Back to the CFP. According to Dinich, “Biggest obstacle to the playoff: Its weak schedule. BYU’s overall strength of schedule this season ranks 101st. What the committee will like: A Friday night win against a ranked Boise State team on the blue turf and a quarterback who should be in the Heisman conversation.” Zach Wilson was the real deal, but the only remaining games for the Cougars and him are against FCS North Alabama and San Diego State, which saw any hope of a ranking yanked away by last Saturday’s loss to San Jose State. How much good can those two likely wins do them?

On a day when Dalvin Cook ran wild against and recorded a 206-yard day, Alexander Mattison still had 69 yards rushing. Detroit couldn’t stop either one of them in Minnesota’s 34-20 victory Sunday. Mattison did it on only 12 carries, averaging almost six yards per attempt. Ten of them came in the fourth quarter, when he helped close out the games with bursts of 14, 18 and 18 yards on the Vikings’ final possession. You’ve gotta think he’d be an RB1 on a lot of other NFL rosters. For the season, Mattison has 322 rushing yards and is averaging 4.7 yards per tote.

The Boise State athletic department made it official in an email to season ticket holders Tuesday. There will be no fans permitted inside ExtraMile Arena to watch Broncos basketball this season, “at this time,” anyway. But with Idahoans shunning COVID-19 protocols en masse as the virus booms, do you see it changing? This is potentially the best men’s team in Boise State history, and the women are coming off four straight Mountain West tournament championships, and they’re poised to play before a sea of empty seats. #2020. Meanwhile, the Cascade Conference has moved the start of its league hoops schedule from December 4 to January 8, although John Wustrow of the Idaho Press reports that the Coyotes will still be allowed to play their non-conference games this month.

November 11, 2000, 20 years ago today: In one of the wildest games in Bronco Stadium history, Boise State runs away from explosive Utah State, 66-38, in a showdown for the Big West lead. Bart Hendricks threw for a then career-high 381 yards and four touchdowns to offset a stunning 509-yard passing performance by Aggies quarterback Jose Fuentes—and 297 receiving yards by USU’s Aaron Jones, still a Utah State record. The Broncos would go on to win the final Big West football championship and the Humanitarian Bowl.

Ramifications of the Broncos’ injury rash