The fan site MidMajorMadness.com has some interesting observations on Chandler Hutchison as we sit exactly three weeks from the NBA Draft. Chris Schutte points out that “as the NBA continues to drift towards positionless basketball with a heavy emphasis on versatility, Hutchison has the build of a guy that can fit right in.” We always talk about the former Boise State star’s offense, but maybe not enough about his defense. Hutchison averaged 1.5 steals per game last season, with a steal rate in the top 200 nationally. “His length and athleticism should allow him to be a serviceable defender right from the jump, which could wind up in receiving a few more minutes than a typical rookie,” writes Schutte.

Here’s something you don’t think about, but Schutte notes something that’s symptomatic of the early entry era: “Another weakness—as unfortunate as it may be—is his age. At 22 years old, Hutchison is already older than many players in his class, and even players in classes that precede him. Some front offices may view him as a player that is already nearing his ceiling, and may opt to take a player with more potential or upside.” But Hutchison reportedly already has that first-round “promise” from the Chicago Bulls. And, for example, there’s a bunch of players in the NBA Finals who didn’t come close to reaching their ceilings at age 22.

The twins are comin’ back to Nevada. Caleb and Cody Martin took it to the wire, but just before the deadline last night they announced they were returning to the Wolf Pack as seniors this fall. Caleb was the Mountain Player of the Year after averaging 19.5 points and 5.3 rebounds per game last season. Cody was the conference Defensive Player of the Year, adding 1.7 steals and 1.5 blocks per game to his 14.0 points, 6.5 rebounds and 4.4 assists. The Pack is going to be ridiculously loaded—Jordan Caroline revealed last weekend he’ll be back at Nevada as well for his senior season. Jalen McDaniels followed suit last night at San Diego State. McDaniels averaged 10.5 points and 7.5 rebounds as a true freshman. He certainly has the look of an NBA player, but at 6-10, 185 pounds, he needs more beef.

Your singular Mountain West tie in the NBA Finals starting tonight is Golden State guard Patrick McCaw, the former UNLV standout who was enthusiastically welcomed back by Warriors fans when he subbed in during Game 6 against Houston. McCaw had been sidelined since a terrifying fall in a game against Sacramento on March 31. He suffered a spinal bruise and lost feeling in his extremities for a time. That McCaw was able to contribute two points and two rebounds in four minutes bordered on the miraculous considering what had happened to him (he got on the court for one minute during Game 7). In four games against Boise State from 2014-16, McCaw averaged 13.3 points as the Rebels went 1-3 versus the Broncos during that stretch.

ESPN.com bides its time until the start of college football with lotsa lists. Boise State is included in them because the Broncos are No. 21 in ESPN’s Way Too Early Top 25. The latest subject: “Strengths of each Top 25 team after spring practice.” Writes Jake Trotter: “With the entire rotation essentially coming back, Boise State’s defensive line should be stout once again. Curtis Weaver was first-team All-Mountain West as a freshman last year. Returning teammates Jabril Frazier and David Moa were second team. This unit has playmaking and depth.” There are at least three other guys here you don’t want to short-change: Durrant Miles, Sonatane Lui and Sam Whitney. And hey—they could have flipped a coin between the D-line and the secondary.

Are these encouraging words for Boise State? You be the judge. Fresno State was able to sell beer at Bulldog Stadium last season for the first time since 2006, when a California State University system-wide ban on alcohol sales at sporting events was instituted. The Fresno Bee reports that Fresno State took in $90,000 over six home games from beer sales, with another $20,000 coming from baseball and softball games. That football figure is sure to increase this year with the Bulldogs coming off a Mountain West divisional title and a bowl victory. So what about alcohol-related incidents? There were just 28 all season at Bulldog Stadium, with only nine of them coming over the final four games—and none at the season finale against the Broncos on Thanksgiving weekend. Food, er, beverage for thought.

Troy Merritt is off from PGA Tour duty again this week—this time there’s yet another golfer to pay attention to (last week it was Jim Empey and Maddie Sheils). University of Idaho standout Sophie Hausmann tees off today in the 73rd U.S. Women’s Open, one of five majors on the LPGA Tour. Hausmann, a junior from Nottuln, Germany, made the field by finishing second at the Seattle Sectional Qualifier on May 14. That came on the heels of Big Sky Player of the Year honors for Hausmann, who led the Vandals to their second conference title in three years. She also won the 2016 German Ladies Amateur Championship.

It’s hard to resist following former Boise Hawk Gleyber Torres with the Yankees this season. Torres may end up having enough staying power to top the Angels’ Shohei Ohtani for the American League Rookie of the Year award come this fall. Last Friday, at the age of 21, Torres became the youngest player in AL history to hit home runs in four consecutive games. He added more heroics Tuesday night, when he delivered a 10th-inning walk-off single that drove in the winning run in a 6-5 win over Houston. It was Torres’ second walk-off hit of his young career. He’s now batting .319 with nine homers and 26 RBIs.

The birthday of a quarterback who helped changed the face of pro football. Joe Namath’s legend began when he chose the AFL’s New York Jets over the NFL’s St. Louis Cardinals following each league’s draft in 1965. But the defining moment of his 13-year pro career was easily Super Bowl III, before which he boldly guaranteed a Jets victory over the heavily-favored Baltimore Colts. Namath and the Jets would go on to beat the Colts 16-7 in one of the signature upsets in sports. Broadway Joe Namath…75 years old today. 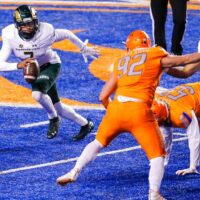 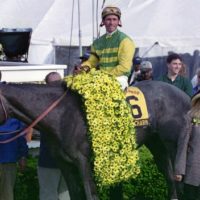