A total of 217 players and coaches were on the ballot Tuesday for the College Football Hall of Fame’s 2020 induction class. If it’s that big two years from now, one Kellen Moore will have plenty of competition. That’s assuming Moore will be on the ballot, but why wouldn’t he be? A player becomes eligible 10 full seasons after his final year of intercollegiate football. Moore’s senior year was 2011, so “10 full seasons” would make him eligible after next year’s ballot. First and foremost beyond that, a player must have received first-team All-America “by a selector that is utilized to comprise the NCAA’s consensus All-America teams.” Check, as Moore was named first-team by the Football Writers Association of America in 2010. And, of course, he’s the winningest quarterback in college football history.

A former Boise State assistant coach is on this year’s ballot again. Ashley Ambrose, who spent the last two seasons as cornerbacks coach at Colorado, was a Division I-AA All-American at Mississippi Valley State in 1991. He led the nation in punt returns as a senior. Ambrose was on the Broncos staff in 2016-17. The only Boise State alumnus in the College Hall is the late Randy Trautman, the Caldwell High grad who was a dominating defensive tackle for the Broncos from 1978-81. Trautman was the defensive centerpiece of the 1980 Division I-AA national championship team.

There are several candidates out of Boise State lore who were on the other side of the field. Among the coaches is Oklahoma’s Bob Stoops, who was on the losing end of the 2007 Fiesta Bowl. Nevertheless, Stoops is the only coach in the BCS era to win a national championship and every BCS bowl game. There are also two coaches the Broncos faced in the playoffs in their Division II infancy. Maxie Lambright and Louisiana Tech defeated Boise State in the semifinals in 1973, and Roy Kramer and Central Michigan won in the first round in 1974. Both the Bulldogs and Chippewas went on to win Division II national titles.

Among the players on the ballot, former Oregon State star Mike Hass appears again. When Boise State beat the Beavers for the first time in 2004, Hass made 12 catches for a staggering 293 yards and three touchdowns. In three games against the Broncos, he had 24 grabs for 512 yards. Hass won the 2005 Biletnikoff Award. Former Idaho State punter and kicker Case deBruijn is up again. deBruijn led Division I-AA in punting in 1980 and 1981 and was runnerup in 1978 and 1979. And we’ll give a nod to former Montana State defensive end Bill Kollar, who was 1972 Big Sky Defensive Player of the Year. In 1974, Kollar became the first defensive player ever to be named MVP of the Senior Bowl.

KTIK’s John Patrick mentioned this, so I checked it out. The Minnesota Vikings website has posted a cool interview with former Boise State teammates Alexander Mattison and Ezra Cleveland. The two are close. “When we drafted him, I’m pretty sure the neighbors heard me,” said Mattison. “That’s how crazy it was.” Said Cleveland: “I wanted to do the same thing, but I was over in Horseshoe Bend. There are no houses around, so nobody could hear me scream or anything.” During the coronavirus shutdown, Mattison has been playing saxophone and working on a studio for music engineering, and Cleveland has been into ultimate frisbee and legos. Mattison was impressed. “He Snapchats me, like, a whole LEGO Star Wars (model),” said Mattison. You can see the interview at MinnesotaVikings.com.

Mattison had fun bantering with Cleveland, but there’s a lot weighing on him right now. The two-time Academic All-Mountain West and Mountain West Scholar Athlete is as good an ambassador for Boise State football as you’ll find, but he’s part of the Minneapolis community now, and these past three weeks have been tough. Consider two tweets he posted Wednesday. “Being black should never be this hard,” said Mattison. And, “Sad to think how many times I’ve envisioned how I’m going to have the ‘what to do if you ever get stopped by a police officer’ conversation with my future kids.”

BACK ON THE DIAMOND

Boise State’s revived baseball program saw its season end very suddenly on March 11. Now, 26 of the Broncos’ 32 roster players are finally in uniform again in summer collegate leagues across seven states. That has to feel good. Boise State’s top pitcher, Wesley Harper, is one of four Broncos playing for the Bismarck Larks of the Northwoods League. Torin Montgomery, Boise State’s second-leading hitter among regulars, is suiting up for the Bismarck Bull Moose I the same circuit. Top hitter Michael Hicks is not in one of the summer leagues.

June 17, 2010, 10 years ago today: For the fifth time in their storied histories, the Boston Celtics and L.A. Lakers go to Game 7 against each other in the NBA Finals. And the Lakers came from behind to win it, 83-79, repeating as champions and claiming their 17th NBA crown, one short of the Celtics’ record. For two-time Finals MVP Kobe Bryant, it was his sixth title. And it was the 11th in the career of Lakers coach Phil Jackson. 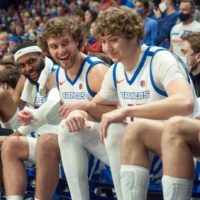