We are still almost four months away from the scheduled start of the college football season. So anything can still happen. It’s too soon to figure out. But since everything’s on the table, let’s look at one possible Mountain West scenario. If Hawaii and the three California schools aren’t able to play when everybody else is ready, the idea of a pod system for the other eight programs has been floated. One suggestion divides the Mountain West into two eight-team pods to take advantage of existing rivalries. You’d have Boise State, Nevada, UNLV and Utah State in one and Air Force, Colorado State, New Mexico and Wyoming in the other. he Broncos and Wolf Pack aren’t scheduled to play again until next year, so that would be a bonus in this arrangement. Sounds good, but it’s all so premature.

USA Today’s Dan Wolken takes the temperature on the college football bowl system. “In an April 27 letter to NCAA president Mark Emmert, the Knight Commission on Intercollegiate Athletics recommended ‘more fiscally responsible bowl-game certification criteria,’ citing the financial issues schools are facing during the pandemic,” writes Wolken. “Among those recommendations were eliminating team ticket purchase requirements and the bowl game paying for team travel, food, lodging, entertainment and awards.” That could be a tough nut for the Famous Idaho Potato Bowl. But Nick Carparelli, the executive director of the Football Bowl Association, said there’s been “unanimous support” in his conversations with conference officials to have a full slate of bowls this season. Will there be enough teams to fill them, though?

WHAT’S WITH ALL THESE RAMS RECRUITS?

It’s a very strange college football recruiting season we’re in. Everyone’s trying to recruit from afar. Boise State has only one commitment for the 2021 class so far. He’s a good one, linebacker Jai Jones from Dallas. There shouldn’t be concern—the Broncos are always strong in the fall and typically end up with one of the Group of 5’s top lists by the time early signing day arrives in December. Twitter was abuzz with up to 10 offers announced by prospects over the weekend. But it’s interesting to see new Colorado State coach Steve Addazio mining recruits the way he is right now. CSU has eight commitments already according to 247 Sports, including two from Texas. Understandably, the Rams 2021 class is currently ranked No.1 in the Mountain West.

Catching up on this one: KTVB’s Jay Tust shed some serious light on former Boise State defensive tackle Sonatane Lui last Thursday. Why did Lui sit out the Las Vegas Bowl? It was due to spinal stenonis, a “playable but extremely painful” condition, according to Lui. He said it developed after he fractured his spine in fall camp, and he hardly practiced during the 2019 season. Recovering from games every week was brutal, he said. Then, during practice for the Hula Bowl at Aloha Stadium in January, Lui felt a pop in his back. He couldn’t feel his feet and was rushed to the hospital, where doctors recommended he retire from football. And so he did. Next step: applying for law school. But that doesn’t mean Lui doesn’t have his eye on coaching high school football. Could even be in Boise. he guy would be an asset to any program.

PIERCE HEADS SOUTH WITH HIS DEGREE

As DeAndre Pierce prepared to graduate from Boise State on Friday, he announced on the Broncos’ Facebook salute that he’s going to complete his college career at Arizona State. The Sun Devils have yet to confirm that Pierce is joining the program, but it’s a natural. His father, former NFL linebacker Antonio Pierce, was promoted to co-defensive coordinator at ASU earlier this year (along with former Cincinnati Bengals coach Marvin Lewis). DeAndre was a passionate playmaker for parts of four seasons as a Boise State safety, making 144 career tackles with an interception. No telling what might have been had not injuries derailed him so many times.

Among the 51 current and former athletes who virtually graduated from Boise State on Saturday was Derrick Marks, and he was a guest yesterday on Idaho SportsTalk. Marks, whose hoops season was stopped cold by the coronavirus crisis in Italy, had advocates as he sought his degree. “Coach (Leon) Rice was constantly reaching out and reminding me I was so close to finishing,” said Marks. He had 21 credits to go when he left Boise State after his Mountain West Player of the Year season in 2015. Now Marks awaits the fate of his Italian pro league next season. He did play one game with no fans before it was shut down for good in early March. It didn’t make that big a difference to him. “For me, I’m internally motivated,” Marks said. “I’m a guy who comes to practice and plays like it’s a game.”

Transfers are the norm now in college sports, and New Mexico men’s basketball appears to have landed a good one (but hey, we’ve said that before). Point guard Jeremiah Francis, a four-star recruit coming out of high school in Ohio, is going to be a Lobo after transferring from North Carolina. After missing UNC’s first nine games, Francis played 16 games for the Tar Heels this past season, averaging 3.3 points. In December, he posted consecutive double-digit scoring games against Gonzaga, UCLA and Yale. Francis is seeking a waiver for immediate eligibility, but that’s a long shot.

May 12, 1970, 50 years ago today: Ernie Banks, “Mr. Cub”, hits his 500th career home run in a game against the Atlanta Braves. Banks slugged 512 homers all told—he led the National League in dingers twice, in 1958 and 1960. He was named to the Major League Baseball All-Century Team in 1999 and was the first Cub ever to have his number retired (his iconic No. 14). Banks loved the game; you can still hear him saying, “Let’s play two!” Banks died in January of 2015 and didn’t get to see the Cubbies win the World Series. 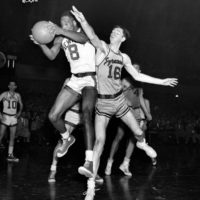