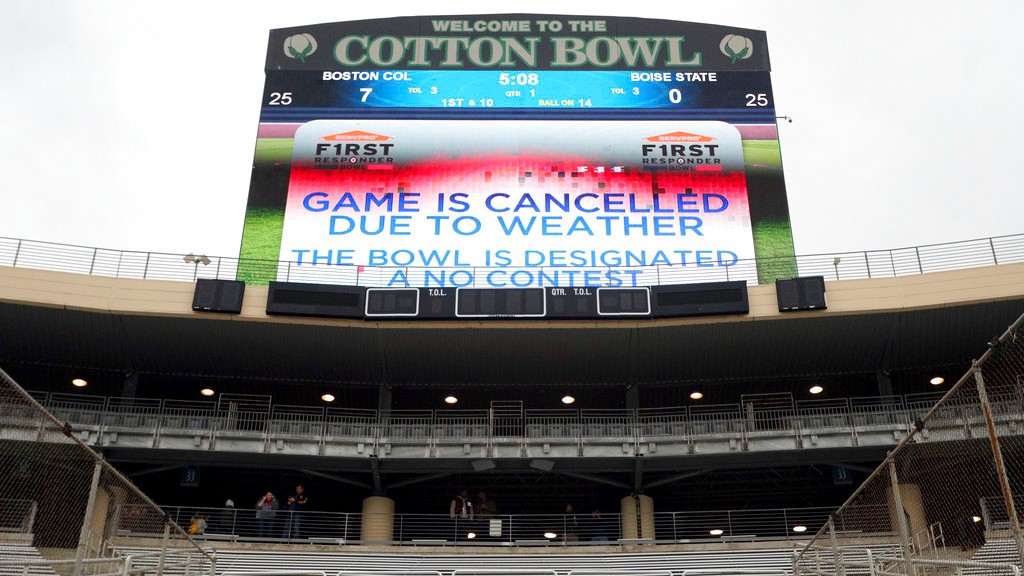 As quickly as the omicron COVID variant is spreading across the country, it was accelerated when Boise State players returned from a brief Christmas with their families. And so there will be no Arizona Bowl on New Year’s Eve. Barstool or no Barstool, what a slap in the face to the seniors and super-seniors in the program. The past four years have been bizarre: the aborted First Responder Bowl in 2018, the 31-point loss to Washington and Chris Petersen in 2019, the bowl opt-out in 2020, and now this. Should the Broncos have stayed in Boise for Christmas? Easy for us to say, but they couldn’t have been denied that opportunity to be with their families. Even one week ago, the omicron situation was a lot different than it is today. And ironically, now Central Michigan is set to play Washington State in the Sun Bowl.

How do the Broncos themselves feel about it? You can guess, based on tweets from them Monday afternoon. From safety Tyreque Jones: “We must be cursed when it comes to Bowl Season.” From running back Cyrus Habibi-Likio: “It breaks my heart to not be able to finish how we wanted. I appreciate everyone who has been apart of my collegiate career.” From wide receiver Stefan Cobbs: “Love everyone on this team, wish I could’ve played wit the seniors one last time man.” And there’s this from Khalil Shakir’s mom, Mona: “Completely bummed! Was really looking forward to his last collegiate game!”

There was also a revelation on Twitter following the Arizona Bowl withdrawal from quarterback Hank Bachmeier: “It was an honor to play with this team. We’ll be back and we will all be better. I’ll be better. For weeks, I’ve been asked about my knee. I damaged my meniscus vs USU and just played through it by bracing it. I’ll get it cleaned up now and then it’s on to gearing up for 2022.” As one of he most hit QBs in the country, it is mighty impressive how Bachmeier just kept on keepin’ on this season.

THE HITS JUST KEEP ON COMIN’ FOR WYO

First it was quarterback Levi Williams, the Famous Idaho Potato Bowl MVP, and wide receiver Isaiah Neyor immediately following Wyoming’s win over Kent State on the blue turf a week ago. Now there are nine players who started for the Cowboys at one time or another in the transfer portal, and the latest is another stunner. Three-time All-Mountain West running back Xazavian Valladay, Wyoming’s second-leading career rusher, announced Monday that he is in the portal as well. Valladay ran for a team-high 1,063 rushing yards and six touchdowns this year. What is goin’ on in Laramie? Expect more Broncos to head for the transfer portal now that the Arizona Bowl has been wiped out, but nothing like Wyo.

BACK TO THE SCENE OF THE CRIME

The Mountain West season begins tonight where it ended on March 2. It was on the ExtraMile Arena floor that Boise State needed a win over Fresno State in the 2020-21 regular season finale if it was to retain any shot of an at-large berth in the NCAA Tournament, and the middle-of-the-pack Bulldogs stunned the Broncos 67-64 on Derrick Alston’s Senior Night, spurring coach Leon Rice to question his team’s toughness. Fresno State is back in Boise tonight, sporting a 10-3 record. The ‘Dogs are even better than Boise State in scoring defense, allowing 54.9 points per game, third-best in the country. And they still have All-Mountain West 7-footer Orlando Robison, who’s averaging 18.5 points per game. This’ll be a toughie.

Rice surely hasn’t questioned Boise State’s toughness since forward Tyson Degenhart was inseted into the starting lineup. Degenhart was named the Mountain West Freshman of the Week for the third consecutive time Monday for his role in the Broncos’ 58-52 come-from-behind win over Washington State in Spokane last Wednesday. It’s not what he did, but when he did it. Degenhart scored nine of his 11 points in the second half. He made a pair of free throws with 3:14 left to give Boise State the lead for good, and he provided some separation with a three-pointer just over a minute later with hundreds of family and friends looking on. Degenhart logged a career-high 38 minutes and led the Broncos in rebounding with six.

Mountain West basketball is off to an odd start as conference play begins tonight. Colorado State, one of only five undefeated teams remaining in the country at 10-0, is ranked No. 20 in the new AP and Coaches Polls. But CSU has had to postpone its league opener tonight at New Mexico due to COVID concerns after canceling their final two non-conference games. The Rams are supposed to be in ExtraMile Arena a week from Friday. San Jose State has had to postpone its first three Mountain West games, going all the way through the middle of next week (and there has to be more in the MW where that’s coming from). On the court, all 11 teams have a winning record coming out s non-conference play, but not a one other than Colorado State has so much as a vote in the polls.

Nevada, depleted as it was, played its bowl game Monday morning. The transfer portal losses cost the Wolf Pack, who fell 52-24 to Western Michigan in the Quick Lane Bowl. Nevada’s 6-9 quarterback, Nate Cox, threw for only 121 yards (with the team’s top six wide receivers having entered the transfer portal), and WMU rushed for 352 yards and 6.8 yards per carry. Air Force gets a good opponent today in the First Responder Bowl, which is now played in Gerald Ford Stadium at SMU. The Falcons are 1.5-point underdogs to Louisville. And tonight, former Boise State coach Bryan Harsin—with quarterback Bo Nix having moved on to Oregon—tries to salvage a winning season for Auburn. The 6-6 Tigers are 1.5-point favorites over the 11-2 Houston Cougars in the Birmingham Bowl.

December 28, 2000: Boise State wins its second straight Humanitarian Bowl on a 26-degree day at Bronco Stadium, beating WAC co-champion UTEP, 38-23. The Broncos got out of the gates with a 28-yard touchdown pass from Bart Hendricks to Jay Swillie and kept the Miners at arm’s length the rest of the way. The game-breaker was a 77-yard third quarter TD run by Hendricks, who wrapped up his college career with the H-Bowl MVP award. It was the final game at Boise State for coach Dirk Koetter, who compiled a 26-10 record before handing the baton to Dan Hawkins and heading for Arizona State.