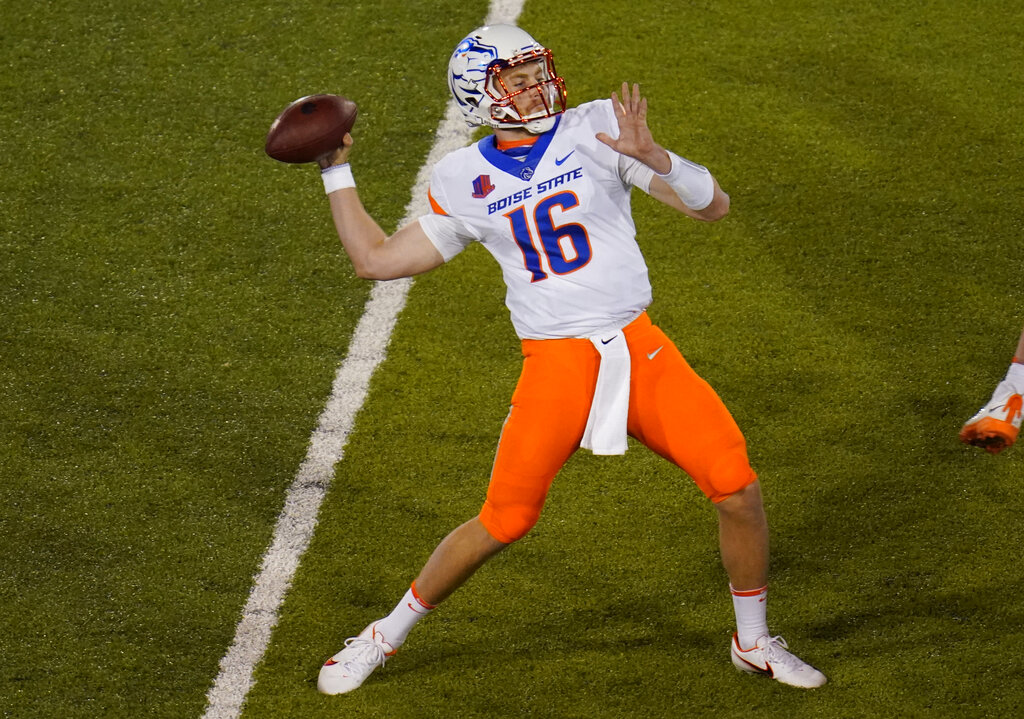 Coach Bryan Harsin has preached it ever since the Mountain West announced a salvaged football season this year. Every Boise State Bronco had be better ready to turn on a dime and enter the lineup with all the unknowns of a pandemic-altered fall. So it was with Jack Sears, who struck gold on a 75-yard touchdown pass to CT Thomas and did not look back in Saturday’s 49-30 victory at Air Force. The USC transfer went 17-of-20 for 280 yards and three touchdowns—and his completion percentage of 85.0 was eighth-best in Boise State history. Sears diplayed great instinct, sensing pressure and spinning out of it—he rushed five times for 36 yards and another TD. Sears guided the offense to a very efficient evening. The Broncos took only 49 snaps but still racked up 42 points (subtracting the Avery Williams kickoff return).

SPEAKING OF THE RECORD BOOK

All the warnings about the triple-option were well-founded. Air Force ran for 415 yards, the fifth-most rushing yards ever allowed by Boise State. The Falcons had 167 yards on just 15 carries in the first quarter alone and 267 at the half. They were especially attacking the left side of the Broncos defense, which had trouble picking up the pitch man. Things improved after the break, as Boise State yielded “just” 148 rushing yards. But there was another category that saw the Broncos keep Air Force in check. The Falcons were successful on three of their first four third down conversions but went just 1-for-9 thereafter. A key to the game.

Some of the Boise State defensive struggles can be attributed to missing persons. It was “Next Man Up” indeed. Safety JL Skinner was the Bronco who, along with quarterback Hank Bachmeier, was left home for the Air Force trip. Neither was for disciplinary reasons. (One of the team’s 27 inactives was COVID-related—Harsin didn’t say which one). Then came the game. First, the offense lost George Holani midway through the first quarter. Then early in the second quarter, Demitri Washington and Scale Igiehon went down. Washington’s injury made you wince, and it looked serious. It would be interesting to see a Boise State “illness and injury report” this week, if there was such a thing. The Broncos need all hands on deck for this Friday’s showdown against ninth-ranked BYU, but hey, this is 2020.

If there’s one team CT Thomas has pestered, it’s Air Force. Thomas had just two catches against the Falcons, but they were for a whopping 101 yards and two touchdowns. Two of his three career 100-yard games have come against Air Force (he had one last year, too). In four career games against the Falcons, Thomas has 11 catches for 281 yards and four of his 10 career TD receptions. He’s averaged 25.5 yards per catch.

So now the table is set for the BYU showdown after the Cougars walloped Western Kentucky 41-10 Saturday night in Provo to improve to 7-0. Last Friday, ESPN trumpeted the five “Biggest Impact CFP Games” over the next three weeks, and No. 5 was BYU at Boise State this Friday. And that’s because ESPN has the Cougars in the hunt for a College Football Playoff berth—with the Broncos standing in the way. The “AllState Playoff Predictor” was giving BYU a 13.3 percent chance of making the CFP. What are their chances on the blue turf? USA Today’s odds from betmgm.com have the Cougars favored by 2.5 points.

With bowl games dropping here and there, this announcement on Friday came as a pleasant surprise: the Famous Idaho Potato Bowl has a date on the calendar. The FIPB is owned by ESPN Events, which has already axed a few bowl games. But the 24th edition of Boise’s bowl is scheduled for 1:30 p.m. on Tuesday, December 22, on the blue turf. “Decisions regarding fan attendance and capacities in the stands and parking lots will be made in accordance with state, county and local guidelines,” said the release. So there are no guarantees. There’s no “Mountain West vs. MAC” yet. The bowl and ESPN are keeping their options open, and that’s a good thing.

ECHL teams are affiliated with—but are not owned by or tied to—the American Hockey League. So the AHL’s newly-announced delay to a February 5 start date does not affect ECHL openers, currently divided between December 15 and January 15. The Idaho Steelheads are in that latter group. But Steelheads president Eric Trapp points out that the organization could still be affected by Central District Health, State of Idaho and City of Boise restrictions which current limit public gatherings to 50 people or less. That would have to change. Hopefully the tide turns (and a lot of it is up to us).

Troy Merritt paid for his trip to Bermuda with a tie for 40th Sunday at the Bermuda Championship, earning $15,800. The Meridian resident and former Boise State star was steady but not spectacular, finishing three-under for the tournament after a couple even-par rounds over the weekend. Graham DeLaet shot 74-77 Thursday and Friday and missed the cut.

November 2, 2013: It’s not just one of the great comeback stories in Idaho history, but in all of sports, as Gary Stevens wins the Classic at the Breeders Cup for the first time. Stevens, who got his start as a jockey in 1979 at Les Bois Park, guided Mucho Macho Man to the winner’s circle by a nostril. The victory, paired with Stevens’ win in the Preakness Stakes in May of 2013, capped a remarkable year for the Caldwell native—two signature triumphs at the age of 50 after being out of the saddle for more than seven years.

Homecoming in the visitors’ dugout