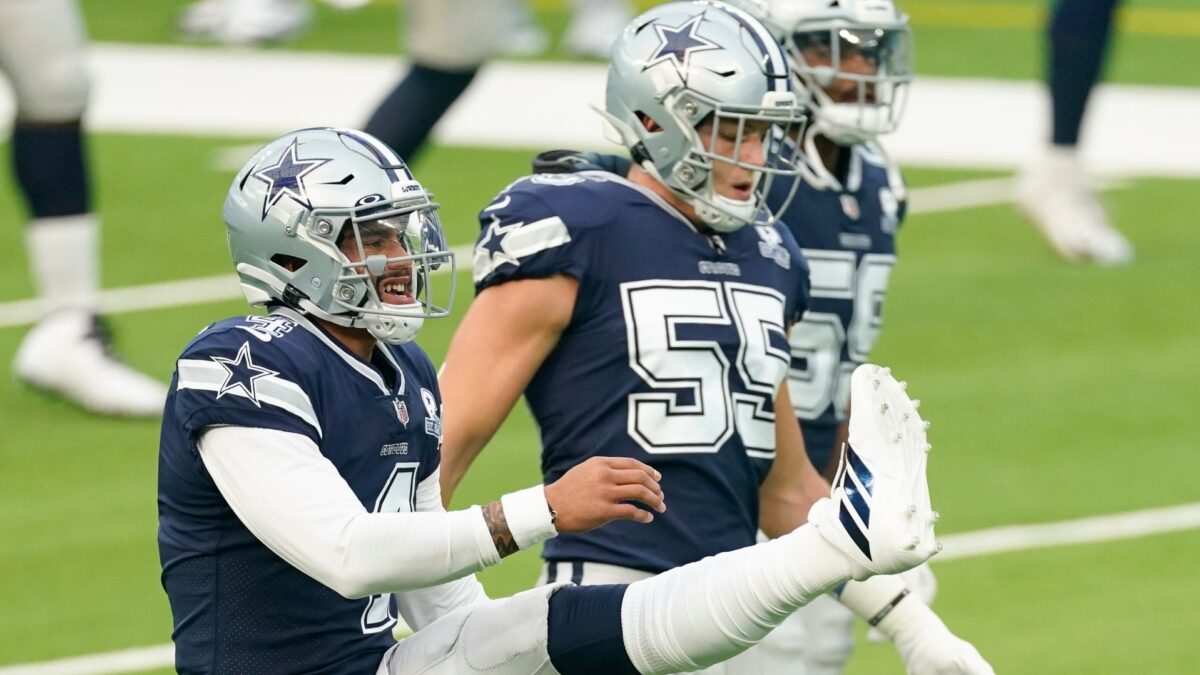 Leighton Vander Esch may still be a Dallas Cowboy a year from now, but he won’t be making $9.145 million. The Cowboys declined on Monday to pick up Vander Esch’s fifth-year option for 2022, and he’ll be an unrestricted free agent after the upcoming season. The consensus—and it’s not a surprise—is that Vander Esch’s injuries finally caught up with him. Dallas executive vice president Stephen Jones says the team would like to keep him next year, but he’ll have to play really well in 2021. The Cowboys drafted Penn State linebacker Micah Parsons in the first round of the NFL Draft last Thursday, but according to ESPN’s Todd Archer, the team looks at Parsons as versatile enough that it can play him, LVE and Jaylon Smith all at the same time (Sean Lee retired last week).

After the Chicago Bears took Ohio State quarterback Justin Fields in the first round, we mused about former Boise State star Charles Leno Jr. blocking for him at some point. After the Bears traded up to select Oklahoma State offensive tackle Teven Jenkins in the second round on Friday, we thought, “Hmmmm.” Well, Chicago released Leno on Monday. That after Leno started all 16 games last season for the Bears and had a streak of 93 consecutive regular-season starts going. That kind of NFL durability is hard to come by on the O-line, which tells you Leno will land somewhere.

You don’t often see the major market media heap this type of praise on an NFL player. But Chris Emma, a reporter for 670 The Score in Chicago, tweeted this on Monday: “As a 7th-round rookie in 2014, Charles Leno Jr. bought a Wal-Mart air mattress and crashed on Kyle Long’s floor. He didn’t know how long he would last. Leno made it seven years and impacted countless others, including more than $70K in donations around Chicago last year alone.” That kind of community commitment is a big loss for the Windy City.

THE LOWDOWN ON HIGHTOWER

Among other Boise State alums affected by the draft, wide receiver John Hightower will find himself in a battle to make the roster as a second-year Philadelphia Eagle this summer. Philly went for the gusto in the first round and chose Heisman Trophy winner DeVonta Smith of Alabama, giving Jalen Hurts a premium target. Hightower, an electric playmaker as a Bronco, was a fifth-round choice of the Eagles a year ago. After a promising start to last season that included catches of 50 and 59 yards, Hightower took some heat for a couple of high-profile drops. He made only one reception over the final nine games of the year and didn’t even play in three of them.

Former Vallivue High star Amoro Lado was all-in with Portland State after an outstanding season at College of Southern Idaho. But three weeks ago, Vikings coach Barret Peery took a job as associate head coach at Texas Tech. That may or may not have been a factor as Lado reopened his recruitment, and he is now aboard with the Hawaii Rainbow Warriors. Lado was CSI’s second-leading scorer this season at 12.0 points per game and shot an impressive 47 percent from three-point range. He’ll have three seasons of eligibility remaining with UH.

Phillippe Desrosiers made his NHL active-player-on-the-bench debut Monday night when the Florida Panthers beat on the Dallas Stars 5-4 in overtime. Desrosiers was added to the Panthers roster earlier in the day and was the backup goaltender in the game. Word is he could start one of the team’s final three games of the regular season. Desrosiers is about as legit a former Steelhead as there can be, as he played part of four different seasons in Boise—most recently two years ago. In 86 career games with Idaho, Desrosiers posted a record of 55-22-12. According to former Voice of the Steelheads Will Hoenike, seven former Steelies goalies have minded nets in the NHL; here’s hoping Desrosiers is the eighth.

EMJAY IS GOING AWAY

The cat is out of the bag: my old bud Mark Johnson is retiring at the end of the year after a cumulative 30 years at KTVB. We teamed up on a lot of Channel 7’s Boise State (and some Idaho) games over the years—before his departure for Milwaukee, and after his return from Pittsburgh. The first game we ever did together was a Broncos basketball game at Gonzaga in late 1986. As I hurried down to get the postgame interview, I slipped and ended up on my keister. Mark made sure the truck showed the replay a couple or three times. Some things never change…

This Day In Sports…brought to you by FRANZ WITTE NURSERY…the flamingos are flyin’ to Nampa!

May 4, 2018: Albert Pujols of the L.A. Angels collects his 3000th career hit in a 3-0 win at Seattle’s Safeco Field. Pujols was the 32nd member of the 3,000-hit club but just the fourth player to get there while also slugging 600 home runs, joining Hank Aaron, Willie Mays and Alex Rodriguez. Pujols’ production had slowed as he reached his upper 30’s, but his first 10 seasons as a member of the St. Louis Cardinals stand as one of the greatest decades ever for a batter, as he hit .331 while averaging 41 home runs, 123 RBIs and 190 hits. Pujols won three National League MVP awards and finished second in the voting four other times.