At the age of 35, Graham DeLaet has to be wondering if it will ever happen. The former Boise State star was tied for the lead at the RBC Heritage going into yesterday’s final round. But alas, DeLaet has now gone 160 PGA Tour events without a victory, as he tied for sixth, three strokes behind first-time Tour winner Wesley Bryan. He knew playing in the final group Sunday wouldn’t be easy. “There’s going to be some battles that I’m going to have to—inside, that I’m going to have to deal with,” DeLaet said after the third round. “I feel like I’m ready now. I want to get this monkey off my back, and I want to get it done. I’m going to go out and try to have fun tomorrow.”

DeLaet had generally avoided bogeys over the first three rounds at Hilton Head. But yesterday, for every birdie (and there were five of them), there was a bogey. And one of them was a triple on No. 12, leaving him with a two-over 73 in the final round. It was, however, DeLaet’s best finish of the 2016-17 season, and he led the way hitting greens in regulation at 83.3 percent. He made $277,750, putting his career total at $10,260,548. But he certainly would like to hoist something on the 18th green late some Sunday afternoon—one of these days.

It all seems so simple. The NCAA Division I council approves allowing FBS programs to hire a 10th assistant football coach early next year. FBS coaches were almost universally in favor of the move, but Group of Five schools had fingers crossed behind their collective backs. Let’s say Boise State looks at Taylor Tharp, a rising star on its staff as Director of Operations and External Relations. The former Bronco quarterback may fit perfectly into a full-time assistant’s role, particularly if it’s specified to recruiting (as many programs are expected to do). That would be a great fit. On the other hand, there are 65 new job openings in Power 5 programs, and they’ll carry salaries that exceed those of many Group of 5 position coaches. Inevitably, some Group of 5 staffs are going to be raided. And Boise State will be an attractive target.

Who do Boise State fans read up on in advance of the Broncos’ game at Washington State on September 12? Now that superstar wide receiver Gabe Marks is gone, I’d suggest Easop Winston. In the Cougars’ final scrimmage of spring football before the annual Crimson & Gray Game, Winston had 10 catches for 126 yards and three touchdowns Saturday. He’s a transfer from City College of San Francisco, and he’s certainly being groomed to be a Marks-type guy. Winston played with the first, second and third units Saturday, because WSU wants to give him as many reps as possible this spring.

So how is Winston melding into the pass-happy Wazzu offense? “He’s got the best hands I’ve ever seen,” quarterback Luke Falk said in the Spokane Spokesman-Review. “That guy, when you get it near him, he catches it.” Cougars coach Mike Leach, who only reluctantly compliments players, said, “He’s got really soft hands. He’s an elusive guy, plays the ball well. He’s gotten better as time has gone on, for a guy that just got here.”

Although the Idaho Steelheads would have loved a sweep at Colorado over the weekend, a split of two games to open a playoff series on the road is usually the goal. The Steelheads, after putting a 4-2 damper on the Eagles in Game 1 Friday night, took a 2-1 overtime loss Saturday night in Game 2. The Steelies were in excellent position until Colorado tied the game 1-1 on a power play goal with 5:43 left in the game. Then the Eagles won it just over a minute into overtime.

Landon Bow, the ECHL’s All-Rookie goalie who led the league this season with a 2.08 goals-against average, was the netminder both nights for Idaho and was under his norm on both occasions despite going 1-1. The Steelheads’ special teams had a good weekend—the ECHL’s second-leading penalty kill unit stifled the league’s second-ranked power play crew, wiping out seven of Colorado’s eight man-advantage opportunities. But the eighth one was costly on Saturday. The series resumes with Game 3 Wednesday night in CenturyLink Arena.

On the campus cruise, Allie Ostrander’s latest foray in track and field was in the 1500-meters, and the Boise State distance star debuted with the 10th-best collegiate time in a field of more than 300 runners Friday at the Brian Clay Invitational in Azusa, CA. Not too far away, the Broncos’ Camren Stoddard and Allison Jeffries swept the pole vault titles at the prestigious Mt. SAC Relays. In gymnastics, Shani Remme recorded Boise State’s highest all-around finish ever at the NCAA Championships, a 39.3625, earning her a 19th-place finish. And the lieutenant beat the general in men’s tennis. Luke Shields, Greg Patton’s former star player and top assistant at Boise State, guided his Fresno State Bulldogs past the Broncos 4-1 Saturday night. Patton remains one win short of 800 career victories.

Boise’s Erik Tieg is overjoyed at having won the Race To Robie Creek once, and fellow Boisean Morgan Arritola is surely happy to have won it twice. On a chilly but sun-washed day up and over Aldape Summit Saturday, Tieg one-upped his runner-up performance of a year ago to take the men’s title. Arritola, a member of the U.S. Olympic team as a Nordic skier at the 2010 Vancouver Games, was a Ketchum resident when she won her first Robie in 2014. She’s baaaack—her time of 1:30:30 was three minutes off her championship time three years ago, but the course ran a little tougher this year.

Jamie Moyer of the Colorado Rockies becomes the oldest pitcher ever to win a major league game in a 5-3 victory over San Diego. The 49-year-old Moyer, with none of his 87 pitches topping 79 miles per hour, threw seven innings while earning his 268th career win in his 25th big league season. Six of the Padres that night hadn’t even been born when Moyer made his debut with the Cubs in 1986. Remarkably, Moyer had come back after missing the entire 2011 season due to Tommy John surgery.

What to make of the Broncos’ big men?

Jake Roh’s aberration season is past 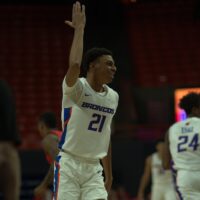