Because I can right now, I’m going to get started early on my recognition of Albertsons Stadium’s 50th anniversary. Every Friday until this craziness blows over (and please hold me to this), I’ll zero in on a memory from what was once known as Bronco Stadium—be it green turf or blue. Today, why not the very first game: September 11, 1970, against Chico State? Boise State was coming off two seasons in the NAIA, its first two campaigns as a four-year school, going a combined 17-3. Coach Tony Knap’s offense had already evolved into an ahead-of-its-time, crowd-pleasing show, and the Broncos routed the Wildcats, a respected team from the Far West Conference, 49-14. The grand opening drew a near-capacity crowd of 14,028 fans (only the west side of the new stadium had an upper deck).

Chris Low of ESPN.com created a 64-team NCAA Tournament-style FBS football bracket this week, and Boise State is in it. But not where you might think. Low bases it on ESPN’s Football Power Index. The Broncos are all the way down at No. 51 on that list, so Low tabs them as a No. 13 seed. Boise State is the only Mountain West team in the field, and the only other Group of 5 teams—four of them—are all from the American. He projects Boise State to lose to fourth-seeded Auburn in the first round. The mythical national championship game? Ohio State 35, Georgia 31. Mark Schlabach is the one who compiles ESPN’s “Way Too Early Top 25,” and he has Boise State at No. 19.

Boise State athletic director Curt Apsey on Thursday (remotely) held his first news conference since the sports world was rocked just over a week ago. Apsey said the university has tested some student-athletes for the coronavirus. “Not a big number,” he said, noting that all tests have come back negative. Apsey said discussions have already begun concerning the Broncos’ spring athletes who have lost a year of eligibility. There’s a sense of urgency to figure this thing out, and the NCAA is working on it. Apsey is heartbroken for Boise State’s winter sports athletes who saw things stop on a dime—and for the seniors who saw their careers suddenly end. He likened it to the football team’s experience when the First Responder Bowl was cancelled during the first quarter in December, 2018.

There was a lot of baseball left to play, and this could have changed after the Mountain West schedule. But Boise State’s abbreviated return to the diamond ended with an NCAA RPI of 148, putting the Broncos in the upper half of Division I. Boise State ranked ahead of seven schools that have combined for 14 national championships, including four-time winner Cal State Fullerton. The 9-5 Broncos also placed higher than 10 schools from Power 5 conferences. They had the second-highest winning percentage in the conference behind New Mexico. Not bad for a team that was a unanimous preseason last-place pick in the Mountain West.

BLAINE: BEST IN THE NAIA

College of Idaho never had a chance to finish its quest for a national championship, but the Coyotes’ Colby Blaine had done enough before the shutdown to be named NAIA Division II Men’s Basketball Coach of the Year on Thursday. Blaine led the Yotes to a 31-3 record in just his second season as coach, with a school-record 25-game winning streak to carry into next season. C of I’s Talon Pinckney, the former Centennial Patriot, was named a first-team All-American for the second straight year. Pinckney is the Yotes’ first-ever back-to-back first-teamer. He’s the only player in C of I history to record 1,000 points, 500 assists and 200 steals in a career. Nate Bruneel, the one-time Rocky Mountain Grizzly, was an honorable mention All-American.

NBA DRAFT SHOULD BE FLYNN’S NEXT STEP

As we wonder whether—and why—Boise State’s Derrick Alston would declare early for the NBA Draft, it’s hard to imagine why San Diego State’s Malachi Flynn wouldn’t. Flynn has been named a first-team All-American by Sports Illustrated and STADIUM, and a second-teamer by NBC Sports, CBS Sports, The Athletic and USA Today. Flynn, the Mountain West Player of the Year, averaged 17.6 points and 5.1 assists per game for the 30-2 Aztecs this season. Alston and Flynn could both opt for early entry and then return to school. Best scenario: Alston declares and returns to school before the deadline; Flynn declares and goes through with it.

March 20, 1945: The birthday of one of the most decorated coaches in NBA history. Pat Riley first made his mark with the L.A. Lakers, with whom he won four championships in the 1980’s during the team’s “Showtime” era with Magic Johnson and Kareem Abdul-Jabbar. L.A. won back-to-back titles in 1987-88, inspiring Riley to trademark the term “three-peat.” The Lakers, however, would be swept by the Detroit Pistons in the 1989 NBA Finals. A four-season stint with the New York Knicks did not produce a championship, but Riley captured a fifth NBA crown in 2006 during a second tour of duty as head coach of the Miami Heat. Pat Riley…75 years old today. 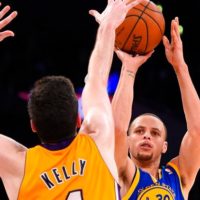 Shaking up the Broncos’ routine – again 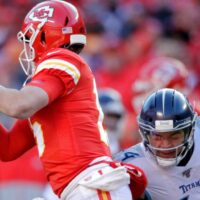 Correa at a crossroads in K.C.