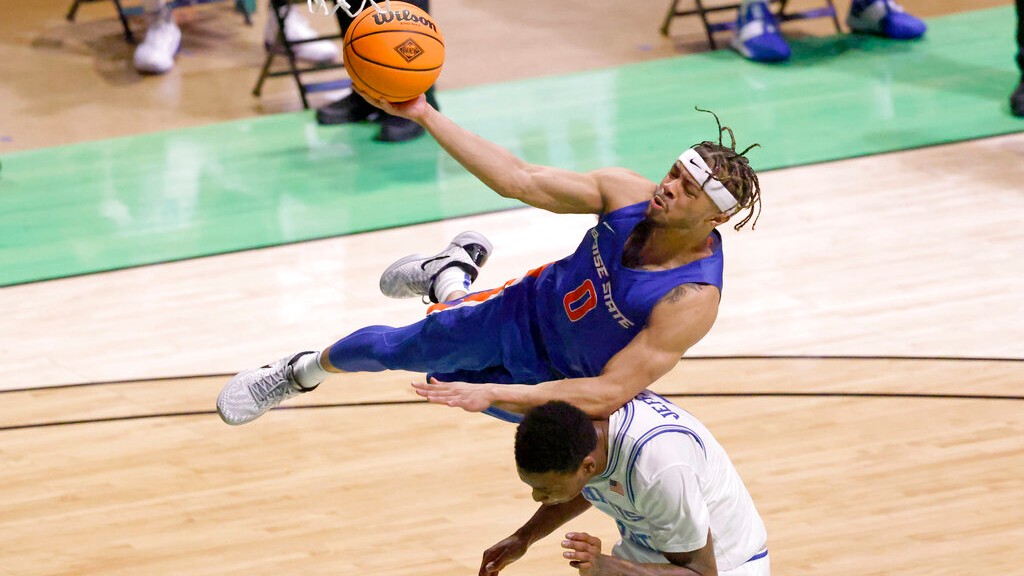 It was clear-sailing at the start as Boise State built a 15-5 lead Thursday night. But then there were increasing clouds, and the Memphis defensive storm hit. The Tigers’ relentless pressure was as advertised, and despite a late-game comeback by the Broncos, their season ended with a 59-56 loss in the NIT quarterfinals. Boise State stayed in the game with defense, but Memphis was better at it, forcing 13 turnovers by halftime. On the other hand, there were only two Broncos turnovers after that. Boise State hung in. The Tigers took their biggest lead of the game at 54-45 with just over five minutes left. But the Broncos went on a 10-0 run and were up 55-54 with 47 seconds remaining. They couldn’t finish it off. Oh what could have been.

As bitter as the end to this Boise State season is, you have to give coach Leon Rice and his staff some credit for righting the ship at halftime last night. The Memphis press looked like it was going to smother the Broncos into oblivion. They trailed by just five points at halftime only because they had forged that early 10- point lead. But adjustments were made, and Boise State hit the timeline much more smoothly in the second half. There were massive scoring droughts, though: 10½ minutes with just two baskets in the first half and a stretch of more than seven minutes with zero buckets in the second. And Derrick Alston Jr.’s Boise State career ended quietly. Alston was 3-for-9 from the field, made just one three-pointer and scored 11 points. No choice now but to remember the good times.

INGREDIENTS OF THE QB BATTLE

While we may not have to wait until the first offensive snap of the season to see who Boise State’s starting quarterback will be (a la Jared Zabransky in 2004), it’s going to take a while for Andy Avalos to choose between Hank Bachmeier and Jack Sears this year. It’ll be no sooner than fall camp, you can bet. What is Avalos looking for? It’s not Xs and Os off the top. “No. 1, their engagement in the players around them off the field,” said Avalos Thursday. Then once we get inside the facility, how we operate within the meeting room. And obviously the work ethic.” The biggest key on the field: “The execution in tough situations—you’ve got to be a tough guy that has good relationships. The chemistry we have and the ability to lead in tough situations is going to carry us.” I’ve never heard it prioritized quite that way before.

There had to be energy in the Boise State cornerbacks room Thursday. How do we know? There was this tweet from corners coach Jeron Johnson: “Appreciate my brotha @RSherman25 joining the zoom giving out some free game to the boys!” Johnson and Richard Sherman were teammates in Seattle as well as in high school in Compton, CA. Johnson may be the least experienced of the Broncos’ full-time coaches, but his value is evident. The newbie coach will be working with newbie cornerbacks next season, but Sherman no doubt has them thinking big.

On the transaction wire, there were two major announcements regarding former Boise State stars Thursday (in multiple sports). Chandler Hutchison, along with Chicago Bulls teammate Daniel Gafford, has been traded to the Washington Wizards. Hutchison spent less than three seasons with the Bulls after being drafted in the first round by them in 2018. Maybe a clean slate—and a clean bill of health—will help him. Hutchison’s latest setback this season was a lower leg injury, and he never fully earned a spot in new coach Billy Donovan’s rotation. He played 79 games for Chicago, averaging 5.8 points and four rebounds per game.

And in Dallas, former Boise State standout Tyrone Crawford is retiring from the Cowboys at the age of 31. Hip injuries suffered in 2019 accelerated the end of Crawford’s career, which totaled 194 tackles and 25 sacks. Crawford, a third-round draft pick of Dallas in 2012, was praised not only for being durable, but for “routinely increasing and decreasing his weight to fluctuate on-demand between edge rusher and interior defensive linemen—often seeing his role change once or more per year,” notes Patrik Walker of CBS Sports. That presumably leaves four former Broncos on the Cowboys roster: Leighton Vander Esch, DeMarcus Lawrence, Darian Thompson and Cedrick Wilson.

It’s Game 3 of 6 for Idaho Saturday when the Vandals host Southern Utah Saturday, but it’s the last one in the Kibbie Dome this season. If the defense stays in gear, you have to like Idaho’s chances against the Thunderbirds. SUU scored 34 points on Cal Poly two weeks ago—then UC Davis scored 73 on the Mustangs last week. The Vandals held UCD to 27. Idaho linebacker Tre Walker leads the Big Sky and is second nationally in the FCS with 17.0 tackles per game.

Speaking of Dan Hawkins’ explosive Aggies, they host Idaho State Saturday. A checkup on ISU quarterback Tyler Vander Waal, the transfer from Wyoming shows he keeps improving. Vander Waal is averaging 317 yards per game passing and has thrown for eight touchdowns against five interceptions. The Bengals are 1-2 after falling 46-42 last week to Eastern Washington.

Senior Emily Muhlenhaupt, probably the best bars competitor in Boise State women’s gymnastics history, has become the first Bronco to earn multiple first-team All-America honors since Julie Wagner in 1995. Muhlenhaupt picked up her second straight first-team honor Thursday after finishing the regular season ranked tied for fourth in the country on bars with a National Qualifying Score of 9.950. Next up for Muhlenhaupt and the Broncos is the NCAA West Regional a week from tonight in Salt Lake City.

March 26, 1973: Another year, another title for UCLA. The Bruins blast Memphis (then known as Memphis State), 87-66, in the championship game of the NCAA Tournament for their seventh straight national title. UCLA’s record winning streak extended to 75 games, as Bill Walton was unstoppable. Walton played the last 9½ minutes with four fouls and ended up making a staggering 21 of 22 shots and scoring 44 points. It was the first tournament final ever to be telecast nationally on a Monday night, a tradition that continues to this day.

Get to know this name: Hank Bachmeier

Bronco football: Every schedule has its quirks 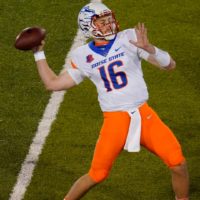