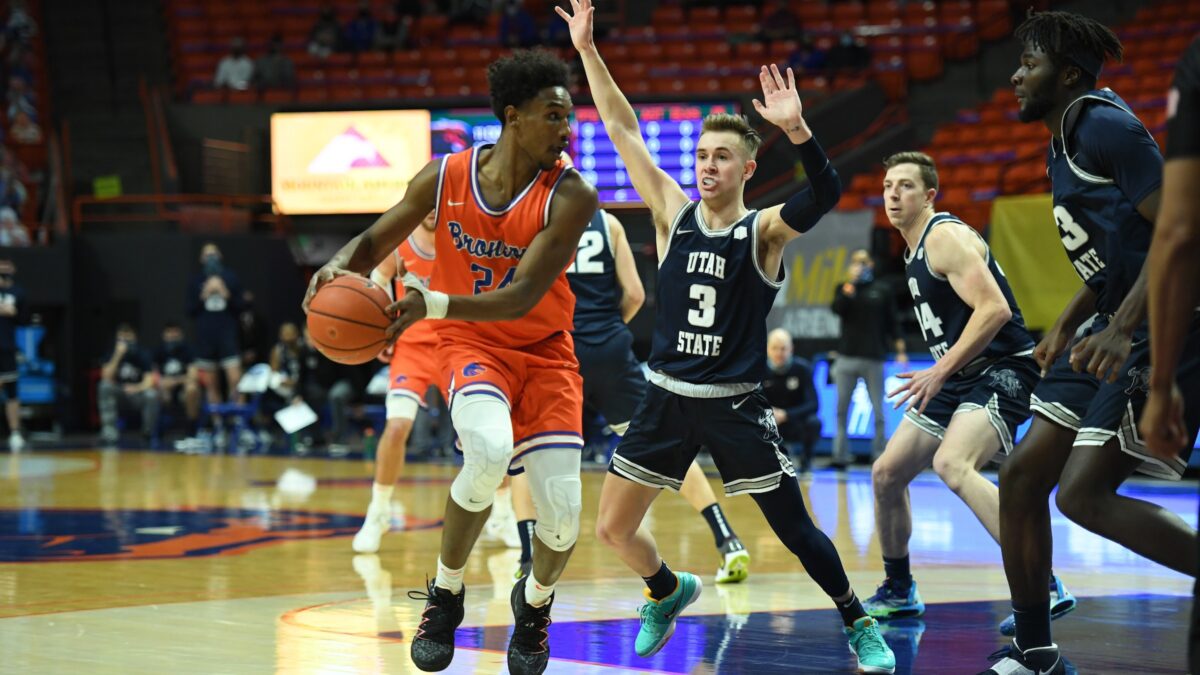 Johnny Mallory asked the question many have pondered Tuesday on Idaho SportsTalk. Will Abu Kigab take advantage of the NCAA waiver and return to Boise State for a “super senior” season? “I haven’t even thought about that, honestly,” replied Kigab. “When I have to make that decision, I’ll do what’s best for me. I’m excited.” That last exclamation tells me Kigab will be celebrating Senior Night next Tuesday with Derrick Alston Jr. The Broncos got 1½ intense seasons from Kigab after he transferred from Oregon. He has been steady as a rock this winter, a complementary talent on a team full of athetes. Kigab is Boise State’s second-leading scorer at 12.8 points per game and is shooting just under 50 percent from the field. He also leads the Broncos in blocked shots and is averaging 5.7 rebounds per game.

ONE MORE IN EXTRAMILE

The Mountain West saved the week before the conference tournament for makeup games, and the league is going to make up eight of them. Boise State gets back the home game it lost a month ago against Fresno State. The Broncos host the Bulldogs next Tuesday, three days after the San Diego State series but a week-plus ahead of the Mountain West Tournament. The Aztecs have been very public about not wanting to play next week, but they’ll head for Las Vegas to face UNLV next Wednesday. The Rebels aren’t excited about it either. Six teams will be playing two different opponents next week: Fresno State, Nevada, Colorado State, UNLV, Wyoming and Utah State. The only team not affected is Air Force, which hasn’t missed a conference game yet this season.

In one fell swoop Tuesday, San Diego State moved within a half-game of first-place Boise State going into the monster series between the two teams beginning Thursday night. The Aztecs were awarded two forfeits by the Mountain West after New Mexico neglected to play them earlier this month for non-COVID reasons. So, for purposes of the regular season championship race and conference tournament seeding, SDSU goes from 11-3 to 13-3. There is confusion, though. Initially, the Mountain West updated the Aztecs’ record to 13-3 on its website—now it’s back to 11-3. At any rate, with all those makeup games added next week the conference race is wide-open again.

With its two new “wins” over New Mexico, San Diego State has now won either eight or 10 games in a row. How have the Aztecs done it? They are who they always have been, a glue-down defensive team. They’re holding opponents to just 39 percent shooting from the field and are allowing less than 60 points per game. Both of those numbers are No. 1 in the conference. SDSU also passed Boise State the past month for the league lead in scoring margin, winning now by an average of more than 15 points per game. And don’t sleep on the Aztecs’ offense. They’re tops in the Mountain West in three-point accuracy at 38.7 percent. But if the Broncos focus on the three-point line like they did versus Utah State, San Diego State star forward Matt Mitchell can burn them from mid-range. It’ll be must-watch TV.

Boise State has been celebrating its Legacy Project during Black History Month, and one of this week’s features is Cedric Minter. Not to single him out, but I’m singling him out. Minter was a local star at Borah High who stayed home and became a four-year star for the Broncos from 1977-80. Not only that, he remains Boise State’s career rushing leader. His record of 4,475 yards has lasted 40 years now and has survived challenges by everyone from Ian Johnson to Brock Forsey to Jay Ajayi. And yes, Minter did play in the NFL for the New York Jets in 1984-85 after a great run in the CFL with the Toronto Argonauts. The most important thing: Minter, who still lives in Boise, is an outstanding guy.

ROMANO FINALLY READY FOR ROUND 2

Former Rocky Mountain star Nick Romano is hoping to pick up where he left off at the end of the 2019 season as Idaho opens its abbreviated spring season Saturday against Eastern Washington. That’s a long time to carry momentum, but it’s hard to ignore the 296 all-purpose yards Romano racked up in the wild 60-53 season-ending overtime win at Northern Arizona. He was first-team All-Big Sky as a kick returner, but it was the rest of his game that could set the table for a breakout. Romano rushed for 154 yards and two touchdowns that day and had 98 yards and two more TDs on four catches. The 2018 Idaho 5A Player of the Year is in line to be the Vandals’ feature running back moving forward.

MORE LIMITED CLICKING AT THE TURNSTILES

The noise from the 872 fans in ExtraMile Arena last Saturday night came right through the ol’ TV. The consensus is: it did make a difference as Boise State rallied past Utah State for a sweep. Now that the Broncos athletic department has the drill down, women’s basketball and gymnastics will get to see people in the seats this week (presumably the men’s basketball team will at its makeup game next Tuesday as well). Women’s hoops hosts San Diego State Friday and Sunday, and the gymnastics squad has a meet against Southern Utah on Saturday. Protocols will be the same, and the attendance limit will remain 900.

February 24, 2002: The Canadian men’s ice hockey team wins the Olympic gold medal for the first time in 50 years at the Winter Games in Salt Lake City. The Canadians beat the USA 5-2 (but the celebration didn’t compare to the one eight years later, when Canada beat the Americans for the gold medal at the Vancouver Olympics). Steve Yzerman and Brendan Shanahan would become the second and third players ever to win Olympic gold and the Stanley Cup in the same year in June when the Detroit Red Wings won the 2002 NHL crown.