Mikey Thompson, like Drmic, is also a fifth-year senior. He redshirted while Drmic played as a true freshman in 2011-12—then Thompson’s first three active seasons saw him become a creative force off the bench. His numbers dipped a bit as a junior to 7.6 points per game and 55 assists. But the Las Vegas native is peaking big-time as a senior, averaging 12.4 points and dishing out 113 assists (the last two on Nick Duncan’s final-minute three-pointers at San Diego State last Saturday). Tonight’s game has the feel of one that will produce a big performance by Thompson, who’s also shooting 37 percent from three-point range and 82 percent from the free throw line.

The other two Boise State seniors have had shorter stints. Montigo Alford, the transfer from the College of Southern Idaho, has only played 13 minutes per game this season. But he does have seven starts, and he can take with him that memorable 25-point night at Colorado State three weeks ago. Lonnie Jackson, the graduate transfer from Boston College, has filled the role everyone expected of him down the stretch. In the last 10 games, Jackson is averaging 10.2 points per game and is shooting 45 percent from three-point range. He scored 11 points in the first six Mountain West games combined.

Nevada is ready to play the spoiler card in Taco Bell Arena tonight. The Wolf Pack has its sights set on a 20-win season and can get there with wins over the Broncos tonight and at home against New Mexico Saturday. “We felt like if we could win 20 games it would be just short of a miracle,” coach Eric Musselman said. “We have 18. It’s been an unbelievable season. I have a lot of friends who thought if we won 15 or 16 it’d be an unbelievable season.” The Pack has turned it around this year with a defense that has held opponents to 38.9 percent shooting, No. 13 in the country. Nevada is also averaging 5.9 blocked shots per game, No. 5 in the nation. It’s difficult to get in a flow against those guys.

Sidebar: Boise State coach Leon Rice was there for what the Reno Gazette-Journal’s Chris Murray calls the biggest win in Nevada basketball history. And, unlike football, it has nothing to do with the Broncos. It came in the second round of the 2004 NCAA Tournament when the Wolf Pack routed Gonzaga for a berth in the Sweet 16. The Bulldogs, with Rice on the bench assisting head coach Mark Few, were ranked second in the country at the time and were a 7.5-point favorite. But Nevada dominated from start to finish in the 91-72 victory, with all five of its starters scoring in double figures. The lineup included Pack legends Kirk Snyder and Nick Fazekas.

The hammer came down yesterday. Idaho and New Mexico State will be out of the Sun Belt Conference after the 2017 season. The Sun Belt announced it will become a 10-team league in 2018 with the addition of Coastal Carolina. Commissioner Karl Benson was on Idaho SportsTalk yesterday and said, “I had been hoping for two years that Idaho and New Mexico State’s performance would improve. Unfortunately, that performance allowed there to be criticism as to ‘What have they contributed?’” The Vandals and Aggies were a combined 10-37 the past two seasons, but both improved significantly last year (Idaho to 4-8 and NMSU to 3-9).

Idaho says it “will evaluate our options.” The university really has two choices now: go independent (as it was in 2013), or move to the FCS, where the Vandals have a standing invitation to join the Big Sky effective through May 4. “Independence is a very difficult status,” said UI president Chuck Staben. “It’s not an easy way to schedule your games and maintain stability.” That leaves the Big Sky, as the idea that the Vandals could talk other FCS schools into the West to move up to the FBS to form a new league is a pipe dream. Athletic director Rob Spear indicated the Vandals plan to stay in the Sun Belt to the end, through 2017. If that’s the line of demarcation, it’ll put a capper on a 22-season run in the FBS.

Speculation is increasing that Doug Martin will be leaving Tampa Bay for greener NFL pastures (at least greener in terms of money). The former Boise State star is one of the premiere free agents in the 2016 crop. Nate Davis of USA Today backed that up yesterday by ranking Martin No. 5 on his list of the top 15 free agents. “The knock is his durability after injuries cost Martin nearly a season’s worth of games between 2013 and 2014,” writes Davis. But Martin bookended those years with two 1,400-yard seasons. Free agents can begin talking with other clubs next Monday—and they can starting signing a week from today.

But Kevin Patra of NFL.com predicts Martin will be the “most overpaid” free agent of this year’s group. “The bowling ball running back had an extraordinarily productive 2015 season, carrying the Tampa Bay offense as the unit broke in a rookie quarterback,” writes Patra. “However, he’s 27 years old with two lost seasons on his resume. Martin is hoping to hit on a contract in the $8 million per year range, which would put him with the likes of Arian Foster and LeSean McCoy. Running backs have proven to be a replacement-level position, not worth spending DeMarco Murray-type money on. It’s the type of deal teams regret when running backs hit 30.”

The Idaho Steelheads’ rivalry with Alaska goes back to the beginning of the Steelheads franchise in 1997, when both clubs were members of the old WCHL, and the other guys were known as the Anchorage Aces. If the rivalry has cooled, it’s only because the Aces have gone through hard times since winning the 2014 Kelly Cup championship. Alaska is currently in last place in the ECHL West Division with a 20-29-6 record and has lost four straight games, while the Steelies reside in first. Not that it has any bearing on the three-game series that starts tonight in CenturyLink Arena. The Steelheads are just 5-4 versus the Aces this season. Idaho has 15 games remaining in the 2015-16 campaign.

The Phoenix Suns are liking what they see so far from recent Idaho Stampede point guard Phil Pressey, and they’ve signed him to a second 10-day contract. In four games with the Suns, Pressey has averaged five points and six assists, with a high of 10 points against Brooklyn last Thursday and 10 assists in his Phoenix debut versus the L.A. Clippers on February 22. Pressey, the former Missouri star, averaged 13 points and 6.4 assists in 25 games with the Stampede before the NBA beckoned. As for the Stampede, they’re not back on the court until Sunday, on the road against the Austin Spurs.

The Boise State women don’t quite have their moxie back, but they have won two straight on the heels of a four-game losing streak. It took overtime for the Broncos to come out on top 64-61 last night at Nevada, a team that has now dropped eight of its last nine games. Boise State was led by Marta Hermida’s 19 points and a strong double-double (14 points, 15 rebounds) by Shalen Shaw in her homecoming. Shaw is a former high school star in Reno.

For the first time in 17 years, Major League Baseball expands its playoff format, going to 10 teams by adding a second wild-card berth to each league. The change created a new one-game, wild-card round in the American League and National League between the teams with the best records who are not division winners. The additions meant 10 of the 30 MLB teams would get into the playoffs, but that was still fewer than any of the other major professional leagues. 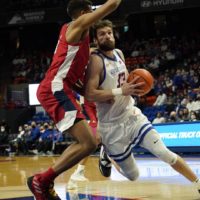 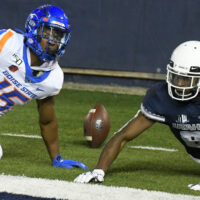