When that Las Vegas Bowl point spread came out Sunday night, the first thought was: how is Boise State, a 12-1 team, a 3½-point underdog to Washington, a 7-5 team? Vegas oddsmakers are pretty smart when they set the line, so what may have come into play in this one? I figure they started with common opponents. Both teams played Hawaii and BYU—back-to-back, four weeks apart. The Huskies beat the Rainbow Warriors by 32 points, and the Broncos topped UH by 22 the first time (it easily could have been 32). But oh, that Provo factor. Washington routed the Cougars by 26 points at LaVell Edwards Stadium. Boise State, of course, fell by three at BYU in its only loss of the season. And the sportsbooks probably give bonus points to the Pac-12.

College football award updates mean something in December, and Boise State’s Bryan Harsin is one of nine finalists for the Eddie Robinson Coach of the Year award that honors the Grambling legend. Harsin was also a finalist in 2014 in his first season, when the Broncos went to their last Fiesta Bowl. There are three others on the list from the Group of 5, former Boise State offensive coordinator Eliah Drinkwitz of Appalachian State (now at Missouri), Mike Norvell of Memphis (now at Florida State), and Sonny Dykes of SMU (still in Dallas). The Power 5 guys are Ryan Day of Ohio State, P.J. Fleck of Minnesota, Ed Orgeron of LSU, Matt Rhule of Baylor and Dabo Swinney of Clemson.

The awards don’t get much better than this. Former Capital High and Arizona State star Jake Plummer was inducted into the College Football Hall of Fame Tuesday night in New York. Plummer was on Idaho SportsTalk Tuesday and talked about what made him tick. “I never played for the stats, man,” he said. “I was always about coming out on top on the scoreboard.” That was epitomized by his wild touchdown scramble near the end of the 1997 Rose Bowl that almost earned ASU a national championship. Plummer pointed out that the late Randy Trautman of Boise State is the only other Idaho-born player in the Hall. “The true Idaho spuds who have been inducted,” said Plummer. John Friesz, the former Idaho great, was born in Montana. “I love John Friesz,” Plummer quickly added.

LOVE’S DAYS AS AN AGGIE ARE DONE

Jordan Love won’t be back under center at Utah State next year. Dan Wetzel of Yahoo Sports had tweeted Monday that Love was considering an early exit for the NFL. But Wetzel added, “If he doesn’t enter the NFL Draft, Love is contemplating a grad transfer, per source. Texas Tech, Oklahoma and Houston all possible destinations. No decision made. NFL Draft grade will weigh heavily.” Love’s not going to wait now, as he announced Tuesday night on Twitter that he is forgoing his senior year at USU for the NFL Draft. It’ll be interesting to see where he’s picked. Love was inconsistent this fall after being named Mountain West Preseason Offensive Player of the Year, throwing 17 touchdowns against 16 interceptions.

The Mountain West has laid down its punishment for Nevada’s part in the brawl at the end of its rivalry game against UNLV a week and a half ago, and it affects the Famous Idaho Potato Bowl. The Wolf Pack’s Austin Arnold, the player who started it by sucker-shoving Rebels quarterback Kenyon Oblad after UNLV’s winning touchdown in overtime, has been suspended for the bowl game, plus the 2020 season opener. Daniel Brown and Hausia Sekona will miss the date with Ohio on one-game suspensions, and Gabriel Sewell will be suspended for the first half on January 3. Discipline for UNLV’s role in the incident is expected to be announced later this week.

Spotlight on Marcus Dickinson as the Boise State men hit the road at Tulsa tonight. The Broncos usually put Dickinson on the opponent’s best perimeter player and let him go to work defensively. Tonight that would be the Golden Hurricane’s Brandon Rachal, who’s averaging 15.9 points per game. But every once in a while, Dickinson’s offensive game rises up. In the last four games he’s scored 16, 3, 16 and 3 points. So he’s due for 16 at Tulsa, right? Dickinson gets to ply his wares in front of family and friends tonight. He’s from Norman, OK, where he played high school ball with former Oklahoma star and current Atlanta Hawk Trae Young.

Spotlight on point guard Jayde Christopher as the Boise State women host BYU tonight in ExtraMile Arena. Christopher leads the nation with 80 assists and already has three double-digit assist games this season. But there was more to her game in the Broncos’ 72-69 win at Colorado State Sunday. Christopher compensated for a 1-for-9 day from three-point range by driving to the hoop. The one-time Kansas Jayhawk scored 16 points, grabbed six rebounds, and handed out her standard eight assists. Believe it or not, this is the first meeting between the Broncos and Cougars in 17 years.

LAXDAL & GRAHAM TAKE IT UP A NOTCH

As the Idaho Steelheads prepare to open a three-game series against Fort Wayne tonight in CenturyLink Arena, there was some interesting news involving the team’s “alumni association” on Tuesday. The Dallas Stars fired coach Jim Montgomery “due to unprofessional conduct.” No word on what transgression caused the move. But two former Steelheads coaches have benefitted from the domino effect. Derek Laxdal, who coached the Steelheads to their last Kelly Cup championship 14 seasons ago, moves up to the Dallas staff from the head coaching position with the Texas Stars of the AHL. And Neil Graham, who was behind the bench for the Steelies a year ago, becomes the head coach at Texas. The NHL Stars have appointed assistant Rick Bowness as interim coach.

December 11, 1971: Boise State plays in its first postseason game as a four-year school, taking on Chico State at the Camellia Bowl in Sacramento. The Broncos fell behind 28-7 early in the third quarter before a wild rally behind quarterback Eric Guthrie and wide receivers Don Hutt and Al Marshall carried them to a 32-28 win. It was also the first time the Broncos appeared on network TV, with ABC telecasting the game regionally via legendary play-by-play man Keith Jackson. 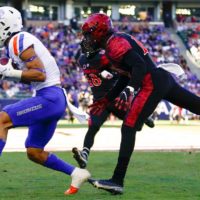