I opened up the Scott Slant fridge last night, and I found some Phil Steele leftovers. That magazine is like a Thanksgiving turkey. It’s hard to finish it off. So here’s a couple of significant sandwiches; they come from Steele’s national position rankings. The most interesting one is a No. 15 spot for the Boise State quarterback unit. “The Broncos are led for one more year by the steady hand of fourth-year starter Brett Rypien,” writes Steele. But what about depth, Phil? Rypien is the only Boise State quarterback who has thrown a pass in a game. Steele must think a lot of backup Chase Cord. Or maybe he looks at junior college transfer Jaylon Henderson reprising Montell Cozart’s role from last year.

Steele goes at least 50 deep on his “Top Individual Units” lists—and elsewhere on offense, the Boise State receivers, running backs and O-line don’t tip his scales. The snub there may be the offensive line, where the Broncos have the depth and experience to start the new season a lot differently than they began 2017. On defense, the defensive line is ranked 16th. Boise State has, for example, two All-Mountain West candidates at one spot, the STUD end position occupied by Curtis Weaver and Jabril Frazier. Steele has the Bronco secondary 37th. He also tabs Boise State’s special teams 15th after their rebound last year, citing punt returner Avery Williams, kicker Haden Hoggarth and punters Quinn Skillin and Joel Velasquez.

When you’re a first-round pick in the NBA, can a shoe deal be far behind? Chandler Hutchison has signed a multi-year contract with Nike. He also did an “Ask Me Anything” session on Reddit during the Summer League. There were lots of questions from fans about his hairline. Like, “How do you get your hairline to be so crisp?” And, “How does it feel to have the GOAT Hairline in the NBA?” What can he say? “I feel blessed lol,” was Chandler’s answer. It came back to that again. “Which player do you see yourself as most comparable to, and thoughts on (Scottie) Pippen comparisons?” queried a fan. Hutchison answered, “Comparable to Paul George—I didn’t watch a ton of Pippen but my dad watched him and pointed out similarities.” Then came this: “Paul George also has a great hairline, coincidence? I think not.”

The axe has fallen at New Mexico, as the Lobos yesterday officially dropped four sports from their athletic program after approval from the Board of Regents. Men’s soccer, men’s and women’s skiing, and women’s beach volleyball will be discontinued, effective next summer. None of the four are part of the Mountain West, a key factor in the decision. The UNM athletic department has long been awash in red ink, although the Albuquerque Journal reports that the plan only achieves $1.15 million in annual savings out of the $1.9 million necessary to meet a deficit-reduction plan previously passed by regents. The deficit had climbed to $4.7 million at the end of the last fiscal year. “(UNM) has consistently finished over budget, a problem often linked to failures meeting lofty ticket projections for football and basketball,” writes Geoff Grammer.

While the big names play the Open Championship at Carnoustie, the rest of the PGA Tour pros are competing in the Barbasol Championship near Lexington, KY. And guess who’s leading after the first round. It’s Meridian’s Troy Merritt, who tore up the Keene Trace Golf Club course with a 10-under 62 yesterday. The former Boise State star played bogey-free golf, posting four birdies and an eagle on the back nine. Merritt leads by three strokes over Andres Romero. The winner of the Barbasol earns fewer dollars and fewer FedExCup points than in a typical tour event and does not get an invitation to the Masters. But he still receives a two-year PGA Tour exemption and a trip to the PGA Championship.

The only drama last night at Memorial Stadium: would the Everett AquaSox reach 20 runs? They led the Boise Hawks 17-1 midway through the sixth inning. Everett’s Ryan Ramos led off the game with a single, Ryan Ogren was next up with a home run, and the rout was on. Either manager Scott Little or the Colorado Rockies scouting staff wanted to get a good look at Hawks starter Miguel Ausua, because he wasn’t pulled until the fourth inning. Ausua allowed 10 runs, six earned. The AquaSox pounded out 18 hits and socked four homers, and the Hawks were unbearably sloppy, committing six errors. Hopefully they got it out of their system last night. Oh, the final? It was 17-2. Nice evening at the ballpark, though.

This event has really taken root since its inception in 2011. The eighth annual Famous Idaho Potato Bowl 7-on-7 Tournament is set for today and tomorrow at the Optimist Youth Sports Complex. This time there’ll be 44 high schools and more than 860 players from around the state competing. Proceeds go to Optimist Youth Football’s Financial Assistance Program. The games are fast-paced, with 15-minute halves, no pads, no defensive rushes and a 3.5-second time limit for quarterback passing. The matchups begin this morning at 9:00, with championship games for both varsity and junior varsity levels set for 12:40 p.m. tomorrow.

After beginning the final round in a tie for sixth place, Zach Johnson wins the Open Championship on the Old Course at St. Andrews in a four-hole playoff over Louis Oosthuizen and Marc Leishman. The final round was pushed back to Monday by Scottish rain and high winds that interrupted play on Friday and Saturday, giving fans one extra day of drama. Johnson’s victory stopped 21-year-old Jordan Spieth’s quest for golf’s grand slam. Spieth had won the Masters and the U.S. Open earlier in the season—and he finished just one shot back in this one. 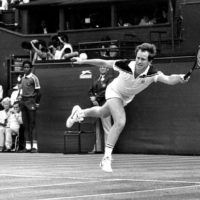 This Day In Sports: McEnroe settles down to win the crown