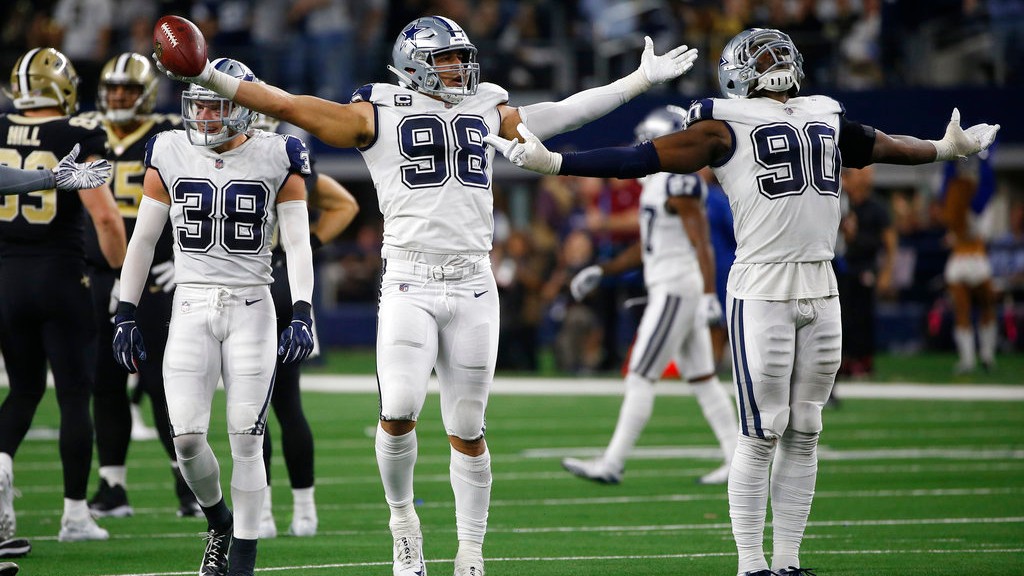 The coolest thing I saw on Twitter Thursday was not an M.J. thread. It was an emotional thank you letter from DeMarcus Lawrence to Tyrone Crawford at ThePlayersTribune.com. Crawford, of course, retired from the Dallas Cowboys at the end of March. Lawrence, still a Cowboy, never actually played with Crawford at Boise State. But that’s where their lives intersected. Lawrence was on his official recruiting visit and met all the Broncos. Crawford stood out to him. “You stopped to talk to me,” writes Lawrence. “You’d just met me, but you already cared about me.”

THE FIRST WEEKEND IN BOISE

There’s a great story in the letter about what happened next. Crawford asked him for advice on any moves he could use in the game the next day. Lawrence thought Crawford was kidding, but he gave him a suggestion anyway. “Then, less than 24 hours later,” Lawrence writes, “I’m in the stadium watching you do my move against Wyoming, and you actually get a sack using it…and I remember just absolutely going nuts in that moment. It was like, Man, that guy really trusted me. He took my advice!” Lawrence continued: “I’m not sure if you even remember this, but after you came off the field and went over to the bench you immediately looked up into the stands. You looked all around and…you found me! Then you ran over and told me thank you. I still get goosebumps thinking about it.”

THE LAST GO-ROUND IN DALLAS

Lawrence was drafted by Dallas two years after Crawford. And the bond became even stronger. “Since that weekend in Boise, you’ve repaid my pass-rushing advice a million times over, and I couldn’t be more appreciative,” Lawrence writes. He gives Crawford credit for essentially helping him grow up when he was “drifting” during his rookie year with the Cowboys. “You saved me, my dawg. You literally saved me.” Lawrence says it’ll be tough not having Crawford around to lean on anymore. DeMarcus signs it off this way: “Now, before I start crying up in here, go live your life without fear or resentment, knowing that your legacy will live on with all of us who you’ve helped along the way. I love you, and I’ve got your back for as long as we live.”

Sixth-round draft picks are often on the fringe in the NFL, and that’s how the experts saw Cedrick Wilson out of Boise State when he was taken by Dallas in 2018. Wilson had to earn his spot, especially after missing his rookie season with an injury. He sure has value now, as he has signed his tender with the Cowboys for one year at just under $2.2 million. Wilson will try to build on a 2020 season that produced 20 touches for 277 yards and two touchdowns—plus a TD pass. He’s been earning it for a long time. You may recall that five years ago, Wilson wore No. 80 as he made his mark in the Broncos’ Spring Game. He hadn’t even played an official down for the team. But in fall camp, he was wearing the coveted No. 1, and he did not disappoint during a stellar two-year Boise State career.

WHEN COLLEGE FOOTBALL GOES OFF THE CLOCK

Chances of a four-overtime 69-67 Boise State win over Nevada like the one in 2007 are fading. The NCAA will now require teams to try two-point conversions after any touchdowns scored from the second overtime on. It previously started in the third OT. Games going into three overtimes will now be decided by teams alternating two-point conversion tries until somebody wins. I always felt the best overtime-shortening solution would be to have each team start possessions on the 40-yard line instead of the 25. That would change the dynamic. In fact, I believe that was the rule in the Division I-AA Playoffs one upon a time. I remember seeing OT start from the 40 in 1979 when Nevada lost 33-30 to Eastern Kentucky.

The Big Sky has doled out its postseason football honors, and four Idaho Vandals and three Idaho State Bengals are first-team All-Big Sky. The Vandals’ formidable linebacking duo of Christian Elliss and Tre Walker, neither of whom played in last Saturday’s finale at Northern Arizona, were honored, as were wide receiver Hayden Hatten and fullback Logan Kendall. ISU’s first-team representatives were wide receiver Tanner Conner, defensive back Jayden Dawson and kick returner Colton Belnap. Both teams finished 2-4 this season.

April 23, 2014: On the 100th anniversary of the first game ever played at Chicago’s Wrigley Field, it was classic Cubbies in a 7-5 loss to the Arizona Diamondbacks. The Cubs were set to celebrate the festive day, leading by three runs going into the ninth inning. Former Boise Hawk Jeff Samardzija was in position for the win after pitching into the eighth, and the Cubs were one out away from victory when an error opened the floodgates, and the D-Backs scored five times. By the way, Wrigley’s debut in 1914 featured not the Cubs, but the Chicago Whales of the short-lived Federal League. The Cubbies first played there in 1916.

Time out for Kyle Brotzman