I had long ago heard rumors about what the new name of Taco Bell Arena would be when the 15-year contract with Taco Bell expired. This wasn’t it. Later this summer, the place will become ExtraMile Arena thanks to a 15-year, $8.4 million agreement with ExtraMile Convenience Stores, a joint venture between Chevron USA and Jacksons Food Stores. Boise State athletic director Curt Apsey saluted Jacksons founder John Jackson for helping foster the new partnership. The rebranding of the exterior and interior of the arena will begin in late summer. ExtraMile Arena is a more sports-appropriate name for the building. Not that Taco Bell doesn’t deserve appreciation for the past 15 years (a $4 million agreement).

The facility opened in 1982 as the BSU Pavilion and has hosted nine NCAA Men’s Basketball Tournaments. The first event held there was Boise State’s 1982 spring graduation ceremony. The first sporting event (of sorts) was a closed-circuit telecast of the Larry Holmes-Gerry Cooney heavyweight bout in June, 1982 (won by Holmes on a 13th-round TKO). The first basketball game was an NBA exhibition matchup that October between the Portland Trail Blazers and (um, I can’t remember the opponent, but I announced it). And the first Boise State basketball game was in November between the Broncos and Michigan State, won by the Spartans 72-59. MSU coach Jud Heathcote’s ties—and affinity for—the Big Sky helped make that happen three years after Michigan State’s national championship.

WILL QUETA STAY, OR WILL HE GO?

Will we see Neemias Queta in a Utah State uniform next winter? He’d be a handful again for Boise State, but he still has his hat in the NBA ring. The 6-11 Portuguese center with the 7-4 wingspan went through testing at the NBA Draft Combine last weekend in Chicago and has six days left to decide if he wants to return to Logan. “I haven’t decided yet,” Queta said during the Combine’s media session. The Mountain West Freshman and Defensive Player of the Year was the fourth-biggest prospect of the 66 players at the Combine, but he was one of the slowest participants tested in the Windy City. Queta did throw down a gauntlet in the Beehive State. “I feel that we were probably the best team in the state the whole year, so we don’t have to talk about it,” Queta said of Utah State. “In football, it was the same thing, too.”

THE COUNTDOWN IS ON

The calendar goes into warp mode now. It is 100 days until Boise State kicks off its 2019 football season in Jacksonville against Florida State. Between now and then come summer conditioning and player-run practices, followed by fall camp. The talk this year is of Boise State’s “favorable” schedule as it tries to get back to a New Year’s Six bowl for the first time in five years. Of course, the schedule’s strength may not make it favorable, as that’s what weighs heavily when the College Football Playoff Selection Committee creates its rankings. At any rate, it doesn’t matter unless you win. And the opener against the Seminoles is going to be as tough as any game on the slate. All focus needs to be there.

So what’s up at FSU now? Andy Staples of Sports Illustrated posted a column this week headlined, “Why Florida State Hasn’t Been an Overnight Fix for Willie Taggart.” The Seminoles were a well-documented 5-7 last season and had some ugly, ugly moments. Taggart, who left Oregon for Tallahassee just before Boise State played the Ducks in the 2017 Las Vegas Bowl, says “there were just some issues that needed to be corrected and won’t get corrected overnight.” Some ‘Noles boosters see that as a cop-out, but Staples thinks Taggart should get a pass. Jimbo Fisher left Florida State with an eroding recruiting base that left Taggart and the Seminoles with this year’s lowest Academic Progress Rate (APR) score among Power 5 schools.

Update on the Mountain West’s last baseball season without Boise State. The conference championships begin today at Peccole Park in Reno, with four teams qualifying for the double-elimination tournament. San Diego State faces UNLV this afternoon, and regular season champion Fresno State takes on host Nevada this evening. If the Broncos can sneak into this event in May, 2020, it’d be a gigantic accomplishment. Meanwhile, Boise State has added another arm to its pitching staff, as Daniel Ferrario has signed a National Letter of Intent. Ferrario is a 6-2, 245-pound righthanded from West Linn, Or, and is transferring from Linn-Benton Community College.

THE ANTITHESIS OF SAN JOSE STATE

People muse these days over what it would take for the Mountain West to dismiss San Jose State for lack of performance and fan support, although it’s unlikely to ever happen. SJSU student-athletes delivered a 19-page letter to the university president Wednesday detailing grievances against the athletic department. Well, here’s a new one. Also Wednesday, the Division III Minnesota Intercollegiate Athletic Conference dismissed the University of St. Thomas—for “competitive parity.” In other words, St. Thomas wins too much. Under coach Glenn Caruso, the Tommies have won six MIAC football titles since 2010 and reached the NCAA Division III national championship game in 2012 and 2015. St. Thomas officials said they were told the league would be disbanded if their school remained a member.

May 23, 1958: Wilt Chamberlain passes on his senior year at Kansas—but not to go to the NBA, which wouldn’t allow him to play in the league until his college class graduated. Chamberlain thus signed with the Harlem Globetrotters and toured with them for a year before joining the Philadelphia Warriors. The dominating 7-1 center went on to become the only NBA player ever to score 100 points in a game and the only one to average 50 points—or even 40 points—per game in a season. Chamberlain won seven NBA scoring titles and 11 rebounding crowns. 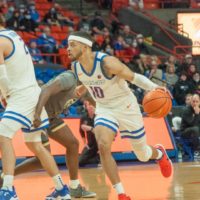 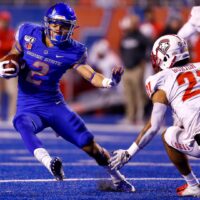 Broncos can look ahead now