In conjunction with the “Decade of Dominance” series, Boise State is choosing the All-Decade team covering the 2010-19 seasons. I’m on the media panel, and you and I and all of us are tasked in Week 1 with choosing the wide receivers. Three of them. It’s easy to come up with three. The problem is, it’s easy to come up with eight. And that’s without Austin Pettis and Titus Young, who I’m leaving out because they played only one year in the decade. On the other end, Khalil Shakir does count. As do John Hightower and Cedrick Wilson and Thomas Sperbeck and Shane Williams-Rhodes and Matt Miller and Tyler Shoemaker. Try to whittle that group down. I need another 24 hours, thank you. Voting will close Thursday at noon and selections will be announced Friday. Give it a shot—there’s no wrong answer at wideout.

Broncos football returns to the KBOI airwaves every Saturday night for the next 14 weeks in retro form, beginning with this week’s broadcast of the 2010 opener against Virginia Tech. The 33-30 victory at FedEx Field outside Washington, DC, was almost as riveting as the 2007 Fiesta Bowl. Almost. It was arguably higher-profile, as it was all by itself on Labor Day night on ESPN. This is how fans will get their official Broncos fix until something breaks.

The Mountain West has heard the grumbling assumptions of inaction and has released a statement on its stance regarding a return to competition. To sum it up: they’re talking about it, and that’s as far as it goes right now. Various conference factions “have been meeting frequently to consider new scheduling models, enhanced medical protocols and revised management plans that can facilitate a responsible return to play.” A key factor is what comes out of the NCAA Division I Council’s meeting a week from today. “Every effort is being made to overcome the existing multi-state obstacles within this complex issue to enable a data-driven decision that maximizes the opportunity for the Mountain West’s student-athletes to compete,” said the statement.

Boise State coach Bryan Harsin has tweeted three “Go Broncos!” in the past week, indicating new Broncos commitments. We know who two of them are. Labor Day weekend began with a verbal from Cord Kringlen, an offensive tackle from Broomfield. CO. Kringlen is the first offensive lineman in Boise State’s 2021 class. The Broncos have upped the ante on linebackers, though—there are now three. They received a commit Sunday from Marco Notarainni from Torrey Pines High in Encinitas, CA. Notarainni picked Boise State over Oregon State, three Ivy League schools, and four Mountain West programs.

HIGHTOWER IS THE HIGHLIGHT

Of the former Boise State players who did make NFL rosters over the weekend, John Hightower has to be the most pleasing. Coming in as a fifth-round draft pick isn’t a gimme, but as soon as Hightower set foot in Philadelphia Eagles camp, there was never a doubt. He was a constant source of highlights once he got his feet wet. “I feel like I’m adjusting to the game speed pretty well,” Hightower told PhiladelphiaEagles.com. “Just knowing the plays. Not still learning them, but actually knowing them has helped me a lot.” His NFL career begins this Sunday at Washington.

There were eight former Boise State standouts who didn’t survive the NFL’s cutdown to 53-man rosters Saturday. Four of them were promptly re-signed to practice squads. Brett Rypien will begin his second NFL season back on Denver’s practice unit, effectively the Broncos’ No. 3 quarterback. Jeremy McNichols, a late-camp signee by Tennessee, will remain with the Titans. Donte Deayon, a star of HBO’s “Hard Knocks” this summer, will be on the Rams’ practice squad. And A.J. Richardson is still hanging around in Arizona, re-signed by the Cardinals. David Moa wasn’t retained on Minnesota’s practice unit, nor were Jamar Taylor with San Francisco and Marcus Henry with Dallas. But John Molchon was placed on injured reserve by Tampa Bay.

DELAET WILL BE SMILING IN THE WINE COUNTRY

Graham DeLaet is poised to finally get back on the PGA Tour this week and do what he can. The former Boise State star is in the field at the Safeway Open in Napa, CA. DeLaet’s return has been delayed multiple times since he had to withdraw from the Farmers Insurance Open at Torrey Pines in January due to that never-ending back pain. The meter begins now on DeLaet’s major medical exemption. He has 24 tournaments to earn 266 FedEx Cup points to retain his PGA Tour card. The five events he played earlier in the 2019-20 season don’t count because of the coronavirus shutdown.

“I feel like I’m good enough to give it a try,” DeLaet told Canadian sports network TSN from his Eagle home last month. “I can’t keep sitting around doing nothing.” DeLaet has reconciled the fact that he may never be 100 percent again. “I don’t think it’s ever going to get much better,” he said of his chronic back problems. “I’ve accepted that.” DeLaet played four tournaments last fall and one in January before his back gave out again. He made the cut in two—his best finish was a tie for 58th. 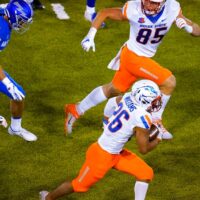