I saw this in a Ferd Lewis column in the Honolulu Star-Advertiser on UCF quarterback McKenzie Milton (he’s from Hawaii). Milton was the MVP of the Knight’s 34-27 victory over Auburn in the Peach Bowl, making them the nation’s only undefeated team in the 2017 season. Lewis doesn’t touch on the fake national championship UCF claimed, but he does paint Milton as an advocate for the Group of 5 in general. And there’s this. “If (we), personally, were to run the table, people would have no choice but to put us in the College Football Playoff,” Milton said at a media session at the Manning Academy. “We’d be sitting at 25-0 over the past two years. We’ve shown we can play with anybody. We just want the opportunity.” Well, actually that would be the truth.

Last month, Milton was in a war of words with ESPN college football analyst Greg McElroy Jr., a former Alabama quarterback. “Alabama would dust (UCF). So would Clemson, so would Georgia, so would all those teams,” McElroy said during his SiriusXM radio show. “They would dust UCF if the national championship was on the line. And you know what? Auburn would, too.” To which Milton responded, “Your career was dust buddy.” Ouch. “I think the main thing the playoff committee is looking for is sustained success,” Milton said, returning to reality. “Alabama sustained success. Georgia sustained success. Clemson sustained success. I think they want to see teams be consistent, year in and year out.” Sound like anyone you know? “For sure, we kind of came up out of nowhere,” Milton said.

Here’s the Phil Steele followup, and a couple more observations on Boise State as his 2018 College Football Preview is now on magazine stands. Steele has always concentrated on the turnover factor, and interestingly, he doesn’t make a big deal out of the Broncos’ amazing turnaround in that department—going from minus-9 to plus-13 last year. But he does make a case for special teams’ place in Boise State’s 11-3 season, as the Broncos rose from No. 101 in Steele’s Special Teams Ratings in 2016 all the way to No. 17 last season. And, he thinks they can get even better on defense this year. “This will be their best D since that 2012 version which allowed just 15.8 points per game,” Steele says.

Steele sees a big push from Utah State in the Mountain West this season, placing the Aggies not only second in the Mountain Division behind the Broncos, but as the second-most improved team in the country this year. Coach Matt Wells should remove himself from the hot seat in Logan. “This is Wells’ most experienced team, as after an average of 10 returning starters the last four seasons, he has 18 this year (plus three Power 5 transfers),” says Steele. “The Mountain Division title could come down to November 24 when the Aggies travel to the blue turf in Boise.” How would that be? A semi-rivalry game on Senior Night with a ton on the line. Even an 8:15 kickoff might not matter in that case.

This tweet appeared last night from Mark Anderson of the Las Vegas Review-Journal: “The Las Vegas Bowl is considering playing two games beginning in 2020 in the new Raiders stadium. No decision has been made regarding whether future includes the Mountain West, but better chance if there is a second game.” Simple reaction: that’s the best thing the Mountain West could hope for after the recent (and expected) report that the Las Vegas Bowl was going to drop the MW after the 2019 season. If only there was some assurance the opponent in a new game would be of the Power 5 variety…

For first impressions of Chandler Hutchison in Chicago, we go to Bulls.com. “Hutchison was poised and firm in his responses to reporters (Monday),” wrote Sam Smith, who had some preconceived notions about Hutchison ending up at Boise State. “Wherever that was,” he wrote. “You know, the basketball powerhouse known for its NBA and ABA alum in the likes of Chris Childs, Coby Karl, John Coker, Clyde Dickey and James Webb, the latter who got in 10 games for Brooklyn last season.” But Smith sees Hutchison as a “mature 22-year-old who is anxious to make his case as the epitome of the modern NBA wing player. Better not tell him he can’t do that.” Hutchison has the proverbial chip. “It was just to be a really good college player at first, Hutch said. “I was given the opportunity to do that and excel at Boise State.”

The Boise Hawks have won four games in a row, but last night’s 7-5 victory over Hillsboro was their first of the season at home in Memorial Stadium. The Hawks blasted out to a 7-0 lead before holding off the Hops before 3,845 fans. Meanwhile, Riley Pint’s stay in Boise is apparently over. The fourth overall pick in the 2016 MLB Draft will reportedly resume his climb through the Colorado Rockies system after two starts. Pint was 0-2 for the Hawks, but his ERA was just 1.29. He issued eight walks compared to seven strikeouts in seven innings of work.

John Patrick brought this up on Idaho SportsTalk yesterday—we had kind of forgotten that Caldwell High grad Jordan Britton is still pitching for Oregon State, but not much. The Beavers fell 4-1 to Arkansas last night in Game 1 of the College World Series Finals in Omaha. Britton didn’t play—in fact, he hasn’t thrown in a game since May 1. Britton, a 6-3 lefthander, is 2-0 with a 3.18 ERA in eight appearances this season. And Will Hall brought this up on KTVB last night: the FC Nova U15 girls soccer team from Boise won the ECNL North American Cup yesterday with a 4-0 win over the Colorado Storm in Redmond, WA.

UNLV’s Anthony Bennett becomes the first Canadian ever to be taken first overall in the NBA Draft when he’s selected by the Cleveland Cavaliers. Bennett also became the second Mountain West player to go No. 1 overall, joining Utah’s Andrew Bogut in 2005. Bennett played just his freshman year with the Rebels and faced Boise State twice, scoring 25 points in a loss in Boise and 11 points in a win in Las Vegas. But he is now considered one of the biggest NBA Draft busts in history. Bennett spent last season with the Maine Red Claws of the G-League. 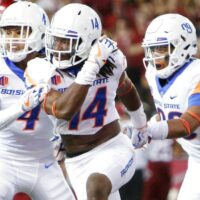 This Day In Sports: And it was going so well at Wazzu