Leighton Vander Esch lasted one quarter before another injury—this one a fractured collarbone—shelved him in Dallas’ first game of the season. Vander Esch headed to the locker room as the second quarter got underway during NFL Sunday Night Football in Los Angeles, and he was declared out for the night a short time later. Following the game he was placed on injured reserve. Under 2020 rules, Vander Esch could return in as little as three weeks, but busted collarbones take a lot longer than that to heal. This after all the work it took for LVE to get back after the neck injury that cost him seven games last season. The former Boise State star was on pace for another double-digit game in tackles, having made three stops at that point. In the end, the Rams won the opener 20-17.

As for other former Bronco defenders, Darian Thompson went all the way at safety and amassed 10 tackles, DeMarcus Lawrence managed only one tackle and a pass deflection, Tyrone Crawford, activated Friday from the physically unable to perform list, made one stop. Offensive coordinator Kellen Moore’s offense was hot and cold in Dallas’ first game under new head coach Mike McCarthy. The Cowboys had a serviceable 380 yards of total offense but were just 3-of-12 on third down and 1-of-3 on fourth. They went for it on a fourth-and-three early in the fourth quarter when a field goal would have tied the game at 20-20 and came up a yard short. There will be criticism. That’s life in Big D. Cedrick Wilson, by the way, played on special teams for Dallas and had one fair catch on a punt return.

CEDRICK IS THE SNUB

Week 1 is in the books in Boise State’s All-Decade team voting, and the wide receivers were Austin Pettis, Matt Miller and Thomas Sperbeck. With all due respect to Pettis, he played only the first season of the decade, 2010. Now, if there was an All-Decade team for the 2000’s, the wideouts would have been Pettis, Titus Young and Jay Swillie (in my opinion). For the 2010’s, Cedrick Wilson has to be in there.

Wilson made an indelible impact on the program in his two years, making circus catches—often in the clutch. He had the 59-yard grab that saved the Broncos in the 2017 Mountain West championship game,–then he bowed out with a performance for the ages in the Las Vegas Bowl win over Oregon with 10 receptions for 221 yards and a touchdown. As a senior, Wilson broke the school season record for receiving yards with 1,511.

It was another solid recruiting weekend for Boise State, as the Lone Star state came through again. On Friday, wide receiver Eric McAlister of Azle, TX, committed to the Broncos. McAlister averaged 23.4 yards per catch on 62 receptions last year, scoring 23 touchdowns. He’s another big target at 6-3, 180 pounds. Offensive tackle Joseph Amos of Lancaster, TX followed with a verbal on Saturday. Amos, who hails from CT Thomas’ high school, has a head start in the size department at 6-6, 325 pounds. Those are Ryan Clady-type numbers.

SENIORS ON EITHER SIDE OF THE FENCE

There are no Boise State games right now, but there are still Iron Men of the Week for their efforts in conditioning and the weight room. I noticed this week’s honorees come from different places as they go into their senior seasons (whenever that may be). Nickel/safety Kekaula Kaniho was All-Mountain West in 2019 and is projected to do it again this year. Defensive end Sam Whitney, officially listed as a graduate student, is thankful to be on the field. He’s a sixth-year Bronco due to a medical redshirt. Whitney missed all of last season rehabbing a torn ACL and was out the final seven games of 2017 with another knee injury after a solid start that included 21 tackles and a sack. Don’t count him out as a contributor when the upcoming season finally happens.

TRICKLE-DOWN EFFECT FROM ONE POSITIVE TEST

Georgia Southern was supposed to be in on the blue turf nine days ago to play Boise State. Instead, the Eagles’ reshuffled schedule had them eeking out a 27-26 win in their season opener against FCS Campbell on Saturday. What was noteworthy was what happened before the game. Georgia Southern announced 33 players were inactive for the contest, and sources told WJCL-TV in Savannah that virtually all of them were due to contact tracing related to COVID-19. Even with the strictest protocols in place, that kind of thing can happen this season. Only one player had tested positive for the coronavirus, but the Eagles were following NCAA guidelines that say those who have come in high risk contact with individuals who have tested positive must sit for 14 days.

September 14, 2010, 10 years ago today: Former USC star Reggie Bush becomes the first winner in the 75-year history of the Heisman Trophy to forfeit the award. Bush had been declared ineligible for the season during which he won the Heisman, 2005, after an NCAA investigation revealed he and his family improperly accepted cash and gifts from sports agents while he played for the Trojans. Southern Cal had been hit with severe penalties by the NCAA, including a two-year bowl ban and loss of scholarships, and had removed virtually all traces of Bush from its campus. The NCAA imposed a ban on Bush associating with USC. That was finally lifted three months ago, but the Heisman is still a no-go. 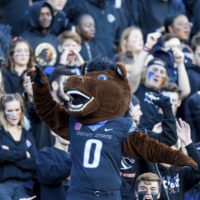