You could tell something was off Saturday night when Boise State turned the ball over on its first two possessions at Air Force. Not that turnovers are unusual for this team, but right off the top like that? There was, as usual, no energy in the building at the Academy, and the Broncos were having trouble finding any of their own. Turns out there was an “x” factor, as coach Leon Rice mentioned in passing on the KBOI postgame show that the locker room was full of “nagging coughs and strep throat and all kinds of things.” Combine that with the fact that Clune Arena sits at 7,081 feet, and Boise State has to feel good about its 70-64 victory. The Broncos managed to pull down only eight rebounds in the second half, but the team was focused. After 11 first-half turnovers, they gave it away only four times after the intermission.

Rice was substituting a lot early, to the point that, like, seven minutes into the game it was hard to remember what the starting lineup was. He spelled Zach Haney with Robin Jorch, then replaced Jorch with David Wacker. Justinian Jessup came in for, interestingly enough, Hutchison with just 3½ minutes gone and nailed his first three-point attempt of the game shortly thereafter. Jessup and Lexus Williams were the glue in this uneven performance. Both players went 4-for-6 from three-point land, and Williams put up 16 points, including two game-sealing free throws with 13 seconds left.

Two guys made it happen at crunch time for the Broncos, though. Marcus Dickinson scored seven straight Boise State points in less than two minutes down the stretch. The sophomore guard’s three-pointer with under four minutes remaining erased the Falcons’ final lead of the game. And then there was Chandler Hutchison, who had an extremely streaky night. Boise State’s star performer began the game 0-for-4 from the field with three turnovers and had only five points at the half. Hutchison endured a 13-minute lull in the second half without a point. Then inside the final two minutes he scored six of the Broncos’ last eight points. Done deal.

Cedrick Wilson had one catch for four yards in the Senior Bowl Saturday. And it came on, of all things, a hook-and-lateral. A botched hook-and-lateral at that. Hopefully the impression the former Boise State star made in practices during the week will have staying power in the ramp-up to the NFL Draft. Wyoming’s Josh Allen peaked in the game Saturday, going 9-of-13 for 158 yards and two touchdowns. And San Diego State’s Rashaad Penny had the biggest day of any Mountain West representative, rushing for 64 yards on nine carries and catching a 73-yard TD pass from Virginia’s Kurt Benkert (remember him?). Penny was co-MVP for the South squad, which won the game 45-16.

It’s Super Bowl week, with every tidbit of information examined and dissected. There’s this from Philadelphia: Jay Ajayi was limited in practice last Thursday and Friday by an ankle injury. NFL.com calls it “a new development worth watching.” But do you have any doubt Ajayi will be on the field this Sunday against the Patriots? The guess is that the former Boise State star will be full-go versus New England—and for as much as Philly needs him. Ajayi had 18 and 21 touches in the wins over the Falcons and Vikings. He’s been important in the Eagles’ passing game, with six catches for 70 yards in the playoffs. But Ajayi has not scored a postseason touchdown.

The Eagles have landed (the hockey Eagles). After a bump in the road—its first two-game losing streak of the season—Colorado finished a sweep of the Idaho Steelheads in Loveland over the weekend. The Eagles’ offense made statements from the opening drop of the puck, scoring three first-period goals each night in victories of 5-3 and 6-4. After Colorado had reached five tallies before the midpoint of the second period on Saturday night, coach Neil Graham pulled goalie Philippe Desrosiers in favor of Ryan Faragher. On the plus side, Will Merchant scored two goals for the Steelies Friday, and Steve McParland scored twice Saturday.

James Webb III is presumably bored no longer (referring to a humorous tweet of his last week). The former Boise State star finally made his NBA debut Saturday night, playing five minutes for the Brooklyn Nets in their 111-97 loss to the Minnesota Timberwolves. Webb went 0-for-2 from the field—his first NBA statistic was an assist. The last former Bronco to appear in an NBA game was Coby Karl with the Golden State Warriors eight years ago.

Other campus things: safe to say the Boise State women’s basketball team is looking for consistency. After racking up 112 points at San Jose State last Wednesday, the Broncos were held to 49 Saturday by one-win Air Force. But they won, holding the Falcons to 46 points and 29 percent shooting. Riley Lupfer hit four more three-pointers, moving to within three of the Boise State single-season record. On the men’s side, it was Idaho doing the routing this time. The Vandals romped past North Dakota 96-71 Saturday, getting more than half their points from two guys—Victor Sanders scored 26 and Braydon Blake 24. And College of Idaho extended its win streak to nine with a pair of victories over Walla Walla. Friday’s final was 83-37; Saturday’s was a little more respectable for the visitors at 71-53.

Greg Patton has his 800th career win as a college head coach. The long-time Boise State men’s tennis coach saw his Broncos beat Whitman 5-2 Saturday to reach the milestone in career that started at UC Santa Barbara in 1976 (when he had shaggy blond hair). The General followed with stops at Cal State Bakersfield and UC Irvine before beginning the first of his two Boise State stints in 1992. The inimitable Patton is one of the most accomplished coaches in any sport in Bronco history, and he’s No. 1 in the country in career wins among active coaches. Congratulations to Greg Patton.

In Pontiac, Michigan, 61,983 fans pack the Silverdome to watch the Detroit Pistons beat the Boston Celtics, 125-108. It was the largest crowd in NBA history—a mark that would stand for 10 years until March 27, 1998, when 62,046 jammed the Georgia Dome to watch Michael Jordan’s final game in Atlanta (at least with the Bulls—he’d later become a Washington Wizard).

Phil Steele’s encyclopedia is out 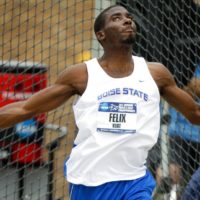