Last Thursday we marked the 100-day checkpoint to the start of Boise State’s 2018 football season. So did Ryan McGee and Mark Schlabach of ESPN.com, with their “100 things to watch 100 days until college football kicks off.” Asks McGee: “Is there a Group of 5 team out there that might do what UCF did a year ago?” Responds Schlabach: “Maybe it’s Boise State. The Broncos have been in that position before, knocking on the door of the top 10. Quarterback Brett Rypien is very good, but he’ll miss receiver Cedrick Wilson. The Broncos’ nonconference schedule includes games against Troy, UConn and Oklahoma State. If they run the table and beat a Power 5 team in a bowl game, maybe they’ll declare themselves national champions.” Well, I think it’s clear they would not.

Aaron Tevis, a starting linebacker on the 2009 Boise State team that went 14-0 and beat TCU in the Fiesta Bowl, initiated a Twitter war of sorts recently with UCF fans who were defending the Knights’ bogus claim to the 2017 national title. Tevis tweeted, “Lol, we have two undefeated seasons, both with BCS bowl wins, but our rings say Conference Champs because @CoachPeteUW (Chris Petersen) taught us not to be petty children.” It went on for days, and Tevis landed a lot of shots regarding the Broncos taking the high road. He finally ended it with this. “After much discourse here is what I learned. UCF: There is a loophole that technically gives us claim to the national championship. Everyone else: UCF wasn’t in the CFP and they are crazy and in denial.”

Homedale defensive lineman Scott Matlock is part of Boise State’s 2018 recruiting class, not 2019. The Broncos announced his Letter of Intent signing on Friday. If you haven’t read B.J. Rains’ story earlier this month tabbing Matlock as the Idaho Press Tribune’s Inspirational Athlete of the Year, you may not realize how cool that is. Matlock lost his dad when he was nine and his mom when he was in eighth grade in Boise and wasn’t sure what was going to happen to him…until the Marose family of Wilder took him in. And he carved out a new life at Homedale High. About all Matlock had left was a dream of playing for the Broncos, and he was floored when it came true. They offered him a scholarship with an asterisk—he’d have to grayshirt and enroll in January of 2019. Now Matlock can join the team this summer.

Google the piece by B.J. Rains. Then you’ll understand. And you’ll know why Matlock told Rains, “I want my story to give hope to people. That’s what I want. I want it to be inspirational, I want it to be motivational, and I want it to give people hope so no matter what you go through, there’s still light at the end of the tunnel.” The bright lights of Albertsons Stadium are visible out of the Boise State tunnel Matlock will be running through—and, amazingly, now it can happen a year earlier than it was supposed to. “I can’t imagine what that moment will be like,” Matlock said. “But I can’t wait for it.”

MWWire.com ranks the top 10 men’s basketball transfers eligible for next season, and Nevada has six of them. Which once again brings up the fact that only five players can be on the floor at one time. At any rate, the No. 1 guy is not one of the Wolf Pack’s highly-publicized new additions, but Nisre Zouzoua, who sat out the last year after transferring from Bryant. Zouzoua averaged 20.3 points in 2016-17 and averaged three three-pointers per game. Just what the Pack needs—another guy to pound ‘em down from deep. Among the other four on the list, Fresno State and New Mexico had two apiece. Boise State doesn’t have a four-year or graduate transfer this year.

Allie Ostrander fans unite. The Boise State star did it again at the NCAA West Preliminary Outdoor Track and Field Championships, winning the 3,000-meter steeplechase and easily qualifying for a second spot in nationals in the 5,000-meters. Ostrander gets a chance to defend her national title in the 3,000 steeple and leads a record contingent of five Bronco women into them NCAA Championships next week in Eugene. She joins Alexis Fuller in the 1,500-meters, Sadie Henderson and Kristie Schoffield in the 800, and Clare O’Brien in the 10,000. Fuller will be only the second Boise State woman ever to run the 1,500-meters at the national meet.

Local golf watchers flipped their attention from the idle Troy Merritt to Jim Empey and Maddie Sheils over the weekend. Empey, the longtime teaching pro at Quail Hollow, couldn’t capitalize on his first-round 69 at the Senior PGA Championship in Benton Harbor, MI, carding an eight-over 78 Friday and missing the cut. Sheils, the Bishop Kelly alum, made her first cut in four tries this season on the LPGA Tour. After a two-under 69 last Thursday, she went 74-72-74 the rest of the way, finishing 67th and earning $2,820. Sheils ended on an uplifting note with a birdie on No. 18 Sunday.

Memorial Day weekend began with the State Board of Education’s announcement that University of Idaho president Chuck Staben’s contract will not be renewed when it expires in 13 months. Disenchanted Vandal boosters were at the core of the move, with 14 prominent supporters submitting a letter to the board requesting Staben’s firing. The sticking point was his decision two years ago to take Idaho football to the Big Sky and the FCS. So inquiring Vandal minds want to know, is there a chance Idaho could be FBS again? Short of the agonizing and fruitless independent route, the university would need an invitation to an FBS conference. Idaho would have to tear the roof off the Kibbie Dome, expand stadium capacity to at least 25,000, and double its football budget. What do you think?

Seen as a huge step for the Idaho Stampede, the franchise announces a three-year single-affiliation agreement with the Portland Trail Blazers. For the first time, an NBA club would be in control of the Stampede’s basketball operations and personnel. Since moving from the CBA to the D-League in 2006, Idaho had been affiliated with five different NBA franchises over six seasons. But the solo association with the Blazers would last only one year. The Utah Jazz took over the affiliation the following two seasons before announcing a purchase of the Stampede in March of 2015—and moving the team to Salt Lake City in 2016. 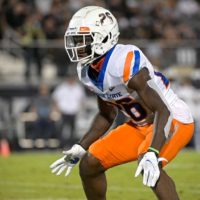 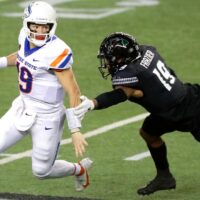