When Boise State’s Derrick Alston subbed in 5½ minutes into the San Diego State game, Saturday night, the first thing you noticed was a lift in the Broncos’ energy. Alston went high to grab an errant shot and scored on a putback—then emphatically clapped his hands together as he dropped back on defense. That in itself was huge for Boise State. Little did we know that Alston would put up 30 points in the Broncos’ stunning 88-64 rout of the Aztecs. Within about four minutes of coming off the bench, Alston had nine points and a pair of rebounds. When SDSU pulled to within 11 early in the second half, Alston scored Boise State’s next five points and 12 of its next 14. It was easily the Broncos’s best individual performance of the season.

Alston played 29 minutes in this game, more than all of last season combined. His previous high in points was 22 in November against St. Bonaventure. Boise State hopes there’s more where this came from. Alston keyed a noteworthy night for the Broncos. In a Boise State-San Diego State series with a history of single-digit results, it was the largest margin of victory ever by either team. It was also the Broncos’ highest-scoring game of the season. Not to be ignored is Alex Hobbs, who got his floater cranked up again. Hobbs scored 18 points, 14 of them in the second half. And it was a defensive dandy, as Boise State held a talent-rich but chemistry-poor Aztecs squad to 41 percent shooting from the field and 14 percent from three-point land.

REINFORCEMENT FOR THE BRONCOS NEXT SEASON

Word leaked out via 247 Sports Saturday that Abu Kigab, who left the Oregon program last week, is going to transfer to Boise State. Kigab is a 6-6 small forward who is said to be in search of more playing time. He averaged 2.6 points and 2.7 rebounds in 10 games for the Ducks this season. Kigab was born in Sudan and raised in Canada, finishing his high school career in St. Catherine’s, ON, before spending time at Prolific Prep Academy in Napa, CA. He was a four-star recruit when he signed with Oregon. Kigab played eight minutes against the Broncos on December 15 in Eugene and scored one point. He didn’t appear in the December 29 in Taco Bell Arena. As a mid-year transfer, it’s likely that Kigab would be eligible to play for Boise State at Christmas break next winter.

INSTANT TONIC FOR THE BRONCOS’ CORNERS

Like most college coaches, Boise State’s Bryan Harsin has a drawer full of names to review when assistant coaches leave. Jalil Brown must have been at the top, because it didn’t take long for Harsin to name Brown as the Broncos’ new cornerbacks coach Friday. Brown had just accepted the same job at Utah State after spending this past season at Northern Arizona. But he was on Boise State’s strength and conditioning staff in 2017, and the lure of the Blue was apparently too great for the former Kansas City Chief and Indianapolis Colts. This transaction can’t help but stoke the fires of the Broncos-Aggies rivalry, especially with former Boise State quarterback and offensive coordinator Mike Sanford Jr. Now settle in at Utah State.

One follow on Harsin’s appearance on Idaho SportsTalk last Thursday: injury status updates on defensive tackle David Moa and wide receiver Octavius Evans. Harsin said there’s no way Moa could have played in the First Responder Bowl—and, in fact, he’s slated to miss spring football with the injury that limited him to a couple series the entire season. Harsin expects Moa to be full-go in time for fall camp. Evans will have foot surgery next week as he tries to rebound from both a high-ankle sprain and a foot injury that derailed his sophomore year. Evans had just two catches for 12 yards this season and appeared (sparingly) in only five games. He’ll also miss spring ball, targeting summer to be 100 pecent healthy.

AN HONOR WITH A CAVEAT FOR LVE

Leighton Vander Esch’s magical rookie year continues at least another week following the Cowboys’ 24-22 win over the Seahawks Saturday night. Vander Esch logged yet another double-digit night in tackles, leading Dallas with 10. It was a productive weekend for the former Boise State star, beginning with second-team AP All-Pro honors on Friday. The remaining drama includes not only how far the Cowboys an go in the playoffs, but if LVE can win the NFL Defensive Rookie of the Year award. He’ll have to overcome Indianapolis linebacker Darius Leonard, who was the AP’s first-team All-Pro pick. Meanwhile, DeMarcus Lawrence had six tackles, two for loss, in the victory, and Tyrone Crawford returned from his neck injury two weeks ago to record three tackles.

BUMP AT THE END OF THE STEELIES’ ROAD

The Idaho Steelheads were spotless on their two-city road trip—until yesterday, when the Tulsa Oilers broke their five-game winning streak with a 3-1 victory. Goalie Colton Point, just returned from the Texas Stars of the AHL, took the loss, stopping 28 shots in 31 attempts. The Steelheads’ stay in Tulsa started well Saturday in a 4-2 win, with two of the goals coming from Reid Petryk. The net effect over the weekend: the Utah Grizzlies have leapfrogged the Steelies back into first place in the ECHL Mountain Division.

NICE START TO THE NEW YEAR FOR MERRITT

Former Boise State star Troy Merritt put together a steady four days at the Sentry Tournament of Champions at Kapalua, HI. The Meridian resident opened at even-par 73 on Thursday and improved from there, ending with a three-under 70 yesterday to finish in the middle of the pack in a stellar field. Merritt was on fire on the back nine in the final round, with the exception of a double-bogey on No. 12, sandwiching that with five birdies. He tied for 16th and pocketed $113,000.

Wrapping up with more hoops—the Boise State women won their 20th straight non-Power 5 matchup Saturday, holding off San Diego State 69-66 at Viejas Arena. For coach Gordy Presnell, it was career victory No. 650 between his stints with the Broncos and Seattle Pacific. That ranks 24th among active Division I coaches. And the College of Idaho men improved to 17-2 with a home sweep of Northwest University and Evergreen State. The test against Northwest was a tough one, with former Timberline High standout Gibson Berryhill riding his patented three-pointer to a career-high 18 points in an 81-74 victory.

January 7, 2010: Boise State’s “Decade of Dominance” is capped with a final ranking of No. 4 in both the AP Poll and the Coaches Poll following a 14-0 season. Alabama was crowned national champion after beating runnerup Texas in the BCS title game earlier that night. The Longhorns, Florida and Boise State were tightly-bunched in the second, third and fourth spot in the polls. Most of the attention, however, was already focused on what might happen the following season, as the Broncos were set to return all but one starter from their 17-10 Fiesta Bowl win over TCU. 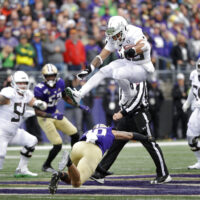