As Washington prepares for Colorado in the Pac-12 championship game tonight, let’s look at what’s happened in Chris Petersen’s third year with the Huskies since leaving Boise State. Some in Seattle wondered what they had really gotten when Petersen went 15-12 in his first two seasons. But those in his corner cautiously pointed out that UW coaching legends Jim Owens and Don James didn’t get it going until year number three after going 6-13-1 and 11-11, respectively. Owens then posted back-to-back 10-1 seasons while winning the 1960 and 1961 Rose Bowls. James was 8-4 in his third year and was victorious in the 1978 Rose Bowl. And here’s Coach Pete at 11-1, with the possibility of doing something even bigger after the Huskies got back into the top four in the College Football Playoff rankings Tuesday night.

Boise State has only its second first-team Academic All-American in the past 38 years—and first since 2011—as Mason Hampton got the nod yesterday from the College Sports Information Directors of America. Hampton, a junior from Meridian High, is the Broncos’ starting center who doubles as a philosophy major with a 3.96 GPA. Boise State’s previous two Academic All-Americans were also local guys: Timberline’s Nate Potter in 2011 and Boise High’s Sam Miller in 1978. Bronco offensive lineman Steven Baggett and punter Sean Wale were each named yesterday to the second team.

The Mountain West championship game tomorrow night features one unlikely subject, of course. San Diego State was the pick all the way along in the Mountain Division. At Mountain West Media Days in July, Wyoming was picked to finish last in the Mountain Division and garnered the fewest points of any league team in the preseason media poll. In fact, the Cowboys’ 31 points in the poll were the fewest any MW team has received since 2004. The Pokes are seeking to become the first last-place pick to go on to win the Mountain West championship. San Diego State players, on the other hand, have expected this all season. “We’re just trying to push each other to the wall,” said senior linebacker Calvin Munson this summer at Media Days. “We know this could be a special year.”

Idaho will salute 20 seniors as the regular season comes to an end tomorrow versus Georgia State in the Kibbie Dome. That’s the largest Senior Day number in recent memory for the Vandals, and none of them are fifth-year players. The most decorated guy of the group is kicker-punter Austin Rehkow, who is averaging 46.3 yards per punt in his career—and we’re talking 213 punts. Rehkow, who became a YouTube sensation when he kicked a 67-yard field goal in 2012 at Central Valley High in Spokane, is enjoying his most accurate year as a placekicker, making 23-of-25 field goals and all 31 of his extra points. He has scored exactly 100 points this year. Rehkow and the Vandals are seeking their first eight-win regular season since 1998.

It’s hard to imagine Utah State coach Matt Wells being under fire, but he has been after the Aggies’ 3-9 season. USU has slipped to 28-25 under Wells, including two straight losing seasons, but had been to five straight bowl games previous to this year. Utah State athletic director John Hartwell issued a letter of support for Wells Wednesday night “We have complete confidence that coach Wells is the man to lead us moving forward,” the letter said. “He and I agree that there will be some changes made as we start preparations for a successful 2017 season.” Changes? Well, Wells apparently agrees. “We got to coach better,” Wells said. “We have to evaluate it from A-Z.”

Boise State hoops has resumed its frequent flier routine, headed for Indiana to face Evansville in the Mountain West-Missouri Valley Challenge tomorrow night. The Broncos meet Loyola-Marymount in Los Angeles Monday. This is a stretch that demands depth, which means coach Leon Rice will have to go further down his bench than he did in Wednesday night’s win over SMU. Rice played only eight guys against the Mustangs (outside of a one minute cameo from Cameron Oluyitan). Marcus Dickinson and Alex Hobbs had been averaging double-digit minutes going into the game. Look for Dickinson and Hobbs, both true freshmen guards, to reappear.

Rice has used the starting lineup of Paris Austin, Justinian Jessup, Chandler Hutchison, Nick Duncan and David Wacker for four consecutive games now. Wacker, however, has not reached 20 minutes in any of the four contests and played only four against SMU while picking up two quick fouls. That semi-post position is an interesting spot. Zach Haney got 24 and 22 minutes against Oregon and SMU, respectively, scoring a combined 12 points with 11 rebounds. By the way, this will be Boise State’s second game all-time against Evansville. The first came toward the end of Leon Rice’s first season as coach, a 75-69 Bronco win in the second round of the College Basketball Invitational at Taco Bell Arena in March, 2011.

Also in hoops, College of Idaho opens its Cascade Conference schedule tomorrow night with the I-84 rivalry, traveling to Eastern Oregon. The Yotes are 7-2 and are ranked eighth in NAIA Division II. Northwest Nazarene lost 81-72 to Alaska-Fairbanks last night and hosts Alaska-Anchorage tomorrow night. And the Boise State women improved to 6-0 last night with a 67-64 win over Eastern Washington in Taco Bell Arena. The Broncos led 22-4 after one quarter, but the Eagles whittled away and made it a game in the fourth, actually tying it up with 41 seconds left. Boise State placed four players in double figures, keyed by Marta Hermida’s team-leading 15 points and Marijk Vanderschaaf’s double-double (11 points, 10 rebounds).

Two of the ECHL’s top six scorers will be on the CenturyLink Arena ice the next two nights as the Idaho Steelheads and Alaska Aces wrap up their three-game series. The Aces’ Peter Sivak has moved into second place in the league with 27 points after potting two goals in Wednesday’s 5-3 Alaska victory. The Aces have been an offensive juggernaut, scoring four or more goals in eight of their last 12 games. Steelheads captain Jefferson Dahl notched an assist Wednesday and is sixth in the ECHL with 23 points. Dahl also leads the league in power play points with nine.

Boise State women’s volleyball makes it first foray into the NCAA Tournament tonight when it takes on Western Kentucky in Stanford’s Maples Pavilion. The Broncos are Mountain West champions and the Lady Toppers are Conference USA champs. It’s the battle of winning streaks, as Boise State has won 14 matches in a row and WKU has taken 21 straight. Is this the start of something big for coach Shawn Garus’ Bronco program, regardless of what happens this weekend? Boise State returns everyone next year but middle blocker Maddy O’Donnell, the team’s lone senior.

The New Jersey Nets fall 117-101 to the Dallas Mavericks and set an NBA record for futility. It was the Nets’ 18th straight loss to start the season. New Jersey, which earlier in the week had fired coach Lawrence Frank, passed the 1988 Miami Heat and 1999 Los Angeles Clippers, who both dropped their first 17 games. The Nets’ infamy had competition that day, though, as reports of Tiger Woods’ various extramarital affairs first hit the headlines. 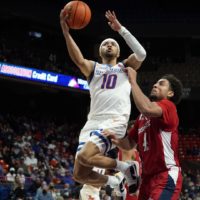 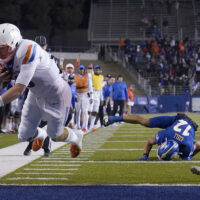