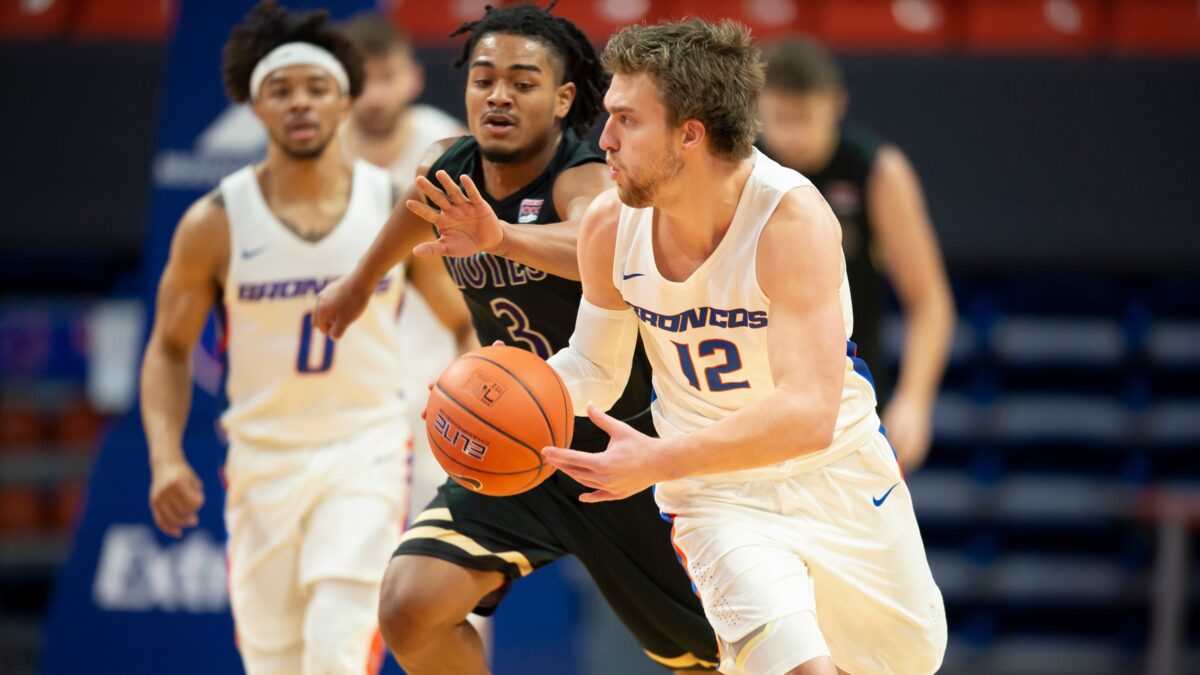 Boise State’s biggest men’s basketball win of the season last year came against BYU, a team that would be ranked No. 18 in the final AP Poll in March. The Broncos outlasted the Cougars 72-68 in overtime behind 26 points and 11 rebounds from Derrick Alston in ExtraMile Arena. Now it’s time for the return game Wednesday night in Provo, and it’ll be a challenge along the lines of the other Cougars Boise State faced, those of Houston (a 68-58 loss in the season opener). BYU, coming off a 67-64 win at Utah State Saturday, is 5-1—its only loss is to USC. “This Boise State team is haunting me,” Cougars coach Mark Pope told KSL after the win over USU. “They’re so athletic, and they missed a bunch of games because of COVID, but I think they’re going to be a real problem in the Mountain West.”

Boise State would be a little more battle-tested for the trip to BYU had it played New Mexico over the weekend. The scrapped two-game series between the Lobos and Broncos has been rescheduled for December 21 and 23 at ExtraMile Arena. The Broncos are left to work on whatever they can coming out of Friday’s 86-49 win over College of Idaho that ended the Coyotes’ 26-game winning streak. Max Rice helped his dad Leon earn his 200th career win at Boise State by putting up 16 points and 12 rebounds. The younger Rice proved he’s going to have a role on this remade team. Props to C of I for scheduling this game on such late notice and putting history on the line. The Yotes, by the way, were scheduled to host Dickinson State Sunday in Caldwell, but that was canceled.

FIGURING OUT THE FINAL WEEK

The Boise State football team, an involuntarily rested bunch now that two straight games have been canceled due to COVID-19, hopes it is back on the field this Saturday for its regular-season finale at Wyoming. The disparity in games played around the Mountain West has thrown the championship game tiebreaker for a loop. The conference does acknowledge the easy part: the Broncos and San Jose State are in of they both win this week. Boise State still makes the title game if Nevada beats the Spartans. No opinion rendered if the game in Laramie is canceled, but the Broncos would still be in. Even if Boise State loses at Wyoming, the only thing that would keep them out is if the Nevada-SJSU game is canceled.

We do know this about the Wolf Pack and Spartans: due to COVID-19 restrictions in Santa Clara County, the teams will play at Sam Boyd Stadium in Las Vegas this Friday. This will be the second consecutive home game yanked away from San Jose State. Saturday’s game against Hawaii was moved across the Pacific to Aloha Stadium. Didn’t bother the Spartans much, as they beat the Rainbow Warriors 35-24. This will be the Wolf Pack’s third game this season in Vegas.

If there’s a Boise State football game at Wyoming this week, we should talk about the Cowboys. They went into the 2020 twilight zone Saturday, facing a decimated New Mexico team on its temporary home field in Las Vegas. The Lobos found themselves down to their No. 5 quarterback, Isaiah Chavez, a walk-on true freshman from Rio Rancho High School in Albuquerque. Chavez showed his inexperience, passing for all of 11 yards—until he threw a 44-yard touchdown pass to Bobby Cole in the fourth quarter.

On the ensuing possession, Cowboys quarterback Levi Williams was injured on a sack, leaving the Pokes with their own true freshman, Gavin Beerup. His fourth-and-two option run for 38 yards looked like it would set up a game-winning field goal. But a fumble stopped Wyoming on the UNM eight-yard line, and New Mexico broke a nation’s-longest 14-game losing skid and a 20-game conference losing streak, also the longest in the country, in a 17-16 victory.

As BYU has become Boise State’s primary football rival, I know it’s hard for Bronco Nation to root for the Cougars. But you have to give them credit for going across the country on two days’ notice to face No. 18 Coastal Carolina. The two teams delivered one of the best games of the season, with the Chanticleers winning 22-17 when No. 13 BYU was stopped on the one-yard line on the final play of the game after a 17-yard pass from Zach Wilson to Dax Milne. It was, without question, a defining win for Coastal Carolina, a program in only its fourth year in the FBS. But with “the Chanticleers are the next Boise State” tweets going around Saturday night, I couldn’t resist this: “Yes, Coastal Carolina will be the next Boise State…when it averages 10.9 wins per season over 21 years.”

The Boise State women’s opener was never a contest as the Broncos, despite having only three players returning from last season, rolled past College of Idaho 90-43 Friday afternoon. On Sunday, the Broncos faced a Division I foe, albeit one that had lost 18 of its 19 previous games. Boise State routed Weber State 84-58 with Jade Loville leading the way again. Loville, who scored 22 points against C of I, notched 16 versus the Wildcats. McGwire sat out the C of I game due to COVID-19 protocols, but she did play Sunday. McGwire was on the floor for only 16 minutes, but she recorded her ninth double-double as a Bronco with 11 points and 10 rebounds.

December 7, 2003: Following a 52-28 win over Oregon State, USC begins a record streak of 33 consecutive weeks atop the AP Poll. The Trojans were ranked No. 1 for the conclusion of the 2003 season, the entire 2004 season and the entire 2005 regular season until falling to No. 2 Texas in the 2006 Rose Bowl, 41-38. The 33-week run holds the record by a wide margin, but it is now tainted by the scandal that forced Reggie Bush to vacate his Heisman Trophy and USC to vacate its final two wins of 2004—including the national championship—and all of its victories in 2005.

DeMarcus Lawrence: Both sides maneuvering with deadlines ahead