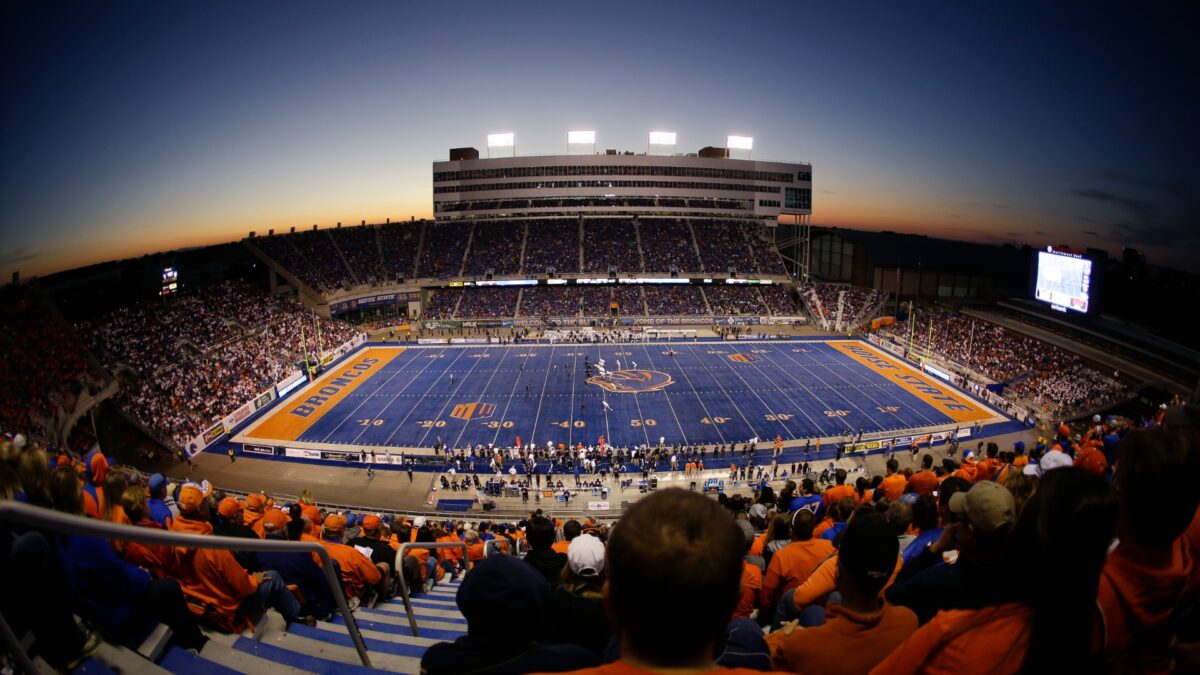 247 Sports has what it calls a “Crystal Ball.” It predicts where college football recruits are going to land. Brandon Huffman, the National Recruiting Editor for 247, has made a radical adjustment for quarterback Katin Houser. Huffman now crystal balls Houser as a “lock” for Michigan State after he took an official visit to the MSU campus last weekend. Indeed, Houser decomitted from Boise State Thursday night. Once he gave his verbal to the Broncos almost three months ago, curiosity in Power 5 recruiting war rooms ramped up.

This can happen when Boise State raises the recruiting bar. A followup tweet from Houser announcing a flip to the Spartans feels like a mere formality at this point. At least this is happening in late June instead of a week before signing day as it did with Zach Wilson and BYU in 2017. There’s still plenty of time, and there are still plenty of QB diamonds in the rough. And the Broncos know who they like.

Veteran columnist Dan Wetzel lets the Pac-12 have it this week at Yahoo! Sports. Wetzel goes back to the BCS era, when the conference looked down on its “smaller” brethren in the West—like Boise State and Utah (then in the Mountain West)—because the Pac-12 didn’t believe they “earned” their way into BCS bowls. So Wetzel has a field day with outgoing Pac-12 commissioner Larry Scott’s contention that all five Power 5 champions should get automatic berths in a 12-team CFP. “The Pathetic-12 is so scared that its champion might get beat out by not just one, but two teams from (the Group of 5) that it wants to rig the rules,” writes Wetzel. “Now that the Pac-12 might have to actually prove itself in a real playoff, prove it’s really, truly better than Boise State, well, it isn’t even hiding the desperation anymore.” Harsh.

BRONCOS & COUGS, NORTH OF THE PALOUSE

If you’re Boise State men’s basketball, you grab Power 5 opponents when you can. CollegeHoopsToday.com reports that the Broncos and Washington State will play a neutral site game in Spokane on December 22. A source tells the website that the contract isn’t signed yet. Boise State is coming off a 19-9 season that went off the rails in March, but despite the graduation of Derrick Alston Jr. and the loss of RayJ Dennis to the transfer portal, the Broncos already know their five starters for 2020-21. The Cougars are expecting three of their top four scorers back from a 14-13 team that finished 10th in the Pac-12 last season.

Troy Merritt dusted himself off and shot a two-under 68 Thursday in the first round of the Travelers Championship in Cronwell, CT. Merritt is tied for 26th—he’d be in the top 10 were it not for a double-bogey on No. 12. He followed that with three straight birdies, though. Also on the golf front, Kailin Downs is the new Boise State women’s golf coach. Downs has been the head coach at Portland State the past eight seasons. She led the Vikings to seven tournament titles, including the 2014 Big Sky Conference championship and the 2018 Rose City Collegiate.

Marisa Howard and Allie Ostrander didn’t have enough Thursday night in the women’s 3,000-meter steeplechase final at the U.S. Olympic Trials in Eugene. But the former Boise State standouts ran their hearts out. Howard, who went into the Trials as the sixth-ranked steeplechaser in the U.S., hung with the leaders throughout and finished fifth, beating her previous personal best by almost five seconds with a time of 9:24.74. Ostrander, who’s had an exhausting month, was back in the pack but was still able to log her best time of the season, 9:26.96, while finishing eighth. She runs the 10,000-meters final Saturday night.

Former Boise State pitcher Jay Baggs is becoming increasingly comfortable as a pro, and Thursday night he picked up his first victory for the Boise Hawks in a 9-5 win over the Billings Mustangs. Baggs went five innings and allowed three runs on three hits. The Hawks’ 11-hit attack was keyed by Jason Dicochea’s first professional home run, a two-run shot in the sixth inning that gave Boise an 8-3 lead. The Hawks have won four of their past five games as they continue to trend upward.

June 25, 1968: Bobby Bonds of the San Francisco Giants becomes only the second player in major league history to hit a grand slam home run in his first game. He played right field that day alongside his mentor, centerfielder Willie Mays. Bonds would go on to play 14 seasons in the bigs and hit 332 career homers. At the time of his major league debut, Bonds had a son named Barry who was a month shy of his fourth birthday.

It’s now a staple of both teams’ schedules