With Boise State’s campus having reopened yesterday, we wonder anew whether everything will fall into place for a September start to the Broncos football season. Bryan Fischer of College Football Talk tweeted yesterday that “NCAA leaders have had preliminary discussions on the men’s basketball season actually beginning early this fall with a winter break. A growing number of campuses pausing in November is prompting a more serious examination of changing the calendar in hoops as well.” Let’s apply that theory to football. September is looking more troublesome all the time. How about college football playing in October and November, taking December and January off, and finishing in February and March? Seems preposterous, but this is 2020. Wouldn’t you take anything at this point?

Mountain West Media Days, the new virtual edition, has been scheduled now. It’ll be conducted July 27-29. So the conference is expecting something to happen with the season. With that said, Hawaii’s September 12 game against Fordham has been canceled, the Rams announced yesterday. The nonconference matchup had been scheduled for Aloha Stadium. It’s the first Mountain West football game to be scrapped due to the coronavirus. Fordham, an FCS school, will decide now whether to cancel the entire season or move it to the spring.

A steady stream of former Boise State players has advanced to the NFL the past 15 years. Some really good ones have had short stays in the league. But Jamar Taylor keeps on keepin’ on. It looks like Taylor is set for an eighth NFL season, as San Francisco has signed him to a one-year contract according to Ian Rapoport of NFL Network. Taylor was a second-round draft pick of Miami in 2013 and has played for five other teams since, most recently with Seattle. He has 242 tackles, three interceptions and 31 pass breakups in his career.

Boise State baseball coach Gary Van Tol was a guest on Idaho SportsTalk yesterday in his first public interview since his program was eliminated last Thursday. “I don’t know if words can describe how disappointing it was,” Van Tol said of the crushing news. How did his players react? “I think that biggest thing was, ‘That’s it?’” said Van Tol. “We didn’t have a chance to sit down and manage this.” He doesn’t know if the robust GoFundMe and private fundraising campaigns have a shot at saving baseball and women’s swimming and diving. But, Van Tol said, “I’m so proud of our student-athletes and Bronco Nation for their support.”

YORKE IS THE LUCKY ONE SO FAR

In the brief 14-game season that celebrated the Broncos’ return to the diamond after a 40-year hiatus, there were some fan favorites developing. One was Joe Yorke, and he was the first Boise State baseball player to find a new home—and the only one yet. Yorke worked quickly after hearing the news, and in 24 hours he landed a spot with Cal Poly, which had recruited him coming out of high school. Yorke collected the Broncos’ first hit in 40 years when he singled in the season-opener at Texas. He hit .275 with eight runs batted in during the abbreviated season. Yorke said on IST yesterday that—even if the Boise State program was miraculously saved—he’s locked in as a Mustang. It’s not going to be as easy for his former teammates to find new places to play.

USU CRACKS DOWN ON OUT-OF-BOUNDS LINEMAN

Back to football—a Utah State player has been suspended after getting into a Twitter battle with a former high school teammate over racial injustice. USU hasn’t identified him, but the ugly thread was there for all to see Sunday. It’s offensive guard Ty Shaw, a senior-to-be who started nine games for the Aggies last year. A statement released by Utah State Sunday night said,“We have been made aware of inappropriate racial comments made by a current student-athlete on our football team. This will not be tolerated and we have suspended the individual immediately and pending an investigation will take appropriate action.” It was signed by coach Gary Andersen and athletic director John Hartwell.

July 7, 2015, five years ago today: The Albertsons Boise Open announces a move back to September in 2016, and with it, new status as one of the tournaments that make up the Web.com Tour Finals (it’s now an August event). What started as a $100,000 event in 1990 would see its purse increase to $1 million and help decide PGA Tour membership the following season. The Boise Open was played in September for its first 22 years but spent the next three in July after being left out of the original Web.com Tour Finals lineup in 2013. 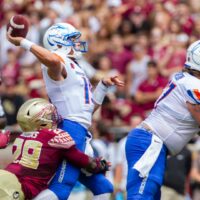 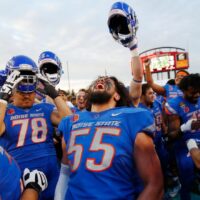