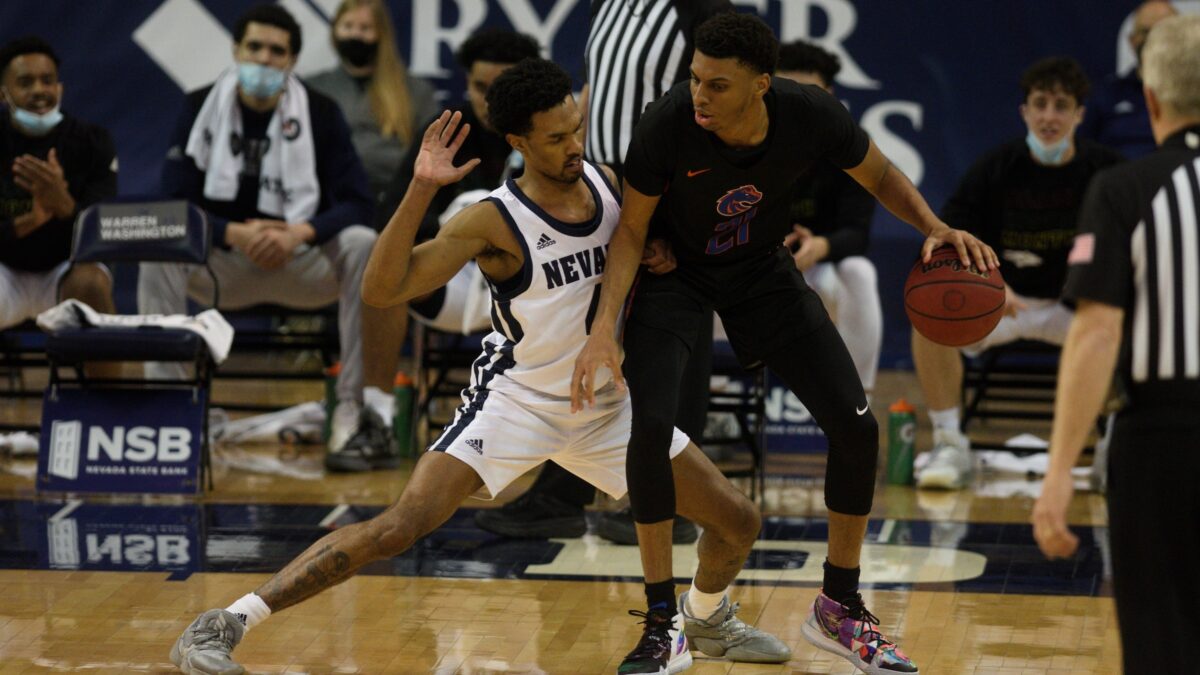 Boise State men’s basketball has suddenly fallen on hard times. Did the Broncos’ relatively easy schedule in late December and January disguise an issue with this team? “I think our defense has definitely taken a little step back,” said Derrick Alston Jr. after the Sunday loss at Nevada, the team’s third in the last four games. “Really for me, I feel like really since the BYU game we’ve kind of taken a step back defensively.” Since the BYU game—on December 9? That begs the question: when it looked like Boise State was flying around in the six weeks before the Colorado State series, choking the passing lanes, changing opponents’ shots and owning the paint, was that just a mirage due to the competition? “I think that’s just something every guy has to look at themselves and take more pride one on one,” Alston said.

The Broncos have been backed into a corner in the Mountain West race. How will they respond? Coach Leon Rice has some decisions to make on rotations and minutes. It’s difficult to put a finger on it from the outside. Players not named Alston, Emmanuel Akot and Mladen Armus combined to go 4-for-24 from the field in the 11-point loss on Sunday. What does that mean for everybody else? Abu Kigab’s 1-for-6 day was an aberration. Marcus Shaver Jr. only put up 10 shots combined in the two games in Reno and made three. RayJ Dennis went 4-for-15 over the two days, while Max Rice was going 1-for-8. But the key is: what is happening on defense? The Boise State staff will go over every frame of video and make its determinations from there.

Jerry Palm, the CBS Sports bracketologist who recently projected Boise State as a No. 9 seed in the NCAA Tournament, has (not unexpectedly) changed course. Palm now has the Broncos as one of the “First Four Out” after the sweep at the hands of Nevada. That’s the price to be paid. There was no margin for error, and Boise State committed two errors in Reno. That is reflected in the NCAA NET rankings, and those count in the eyes of the NCAA Tournament committee. The Broncos have plunged all the way to No. 36. That is bubble territory. And, just so you know, San Diego State is No. 21.

GETTING THE BULLDOGS GAME BACK

Sources tell B.J. Rains of the Idaho Press the Boise State game against Fresno State that was postponed January 22 is tentatively scheduled to be made up Thursday, March 4, in Boise. The Mountain West left a week open at the end of the season for situations like this. The contest, Game 2 of the series against the Bulldogs, was scapped due to COVID-19 concerns within the Broncos program. In Game 1, Boise State followed 30 minutes of their worst basketball with 10 minutes of their best and rallied for a 73-51 win. The makeup date provides an opportunity for a victory—should the Broncos be able to get it—that could loom large in the MW standings.

Eric Kiesau has a new look on his Twitter page. It’s an Auburn logo over a shot of Jordan Hare Stadium. That would seem to indicate the former Boise State offensive coordinator is going to join Bryan Harsin in some capacity. With Harsin’s core coaching staff theoretically complete, an offensive analyst position would be a guess. Kiesau knows something about the SEC, having served as an offensive analyst under Nick Saban at Alabama during the Crimson Tide’s 2015 national championship season. He spent four seasons on the Broncos staff, the first three as a highly-productive wide receivers coach. In his only season as O-coordinator, Boise State averaged just 349 yards per game.

“The best ability is availability.” That phrase has become a thing as injury issues seem to become more prevalent in the sports world. It applies in the case of former Boise State star Leighton Vander Esch, who celebrated his 25th birthday on Monday. If he did that in Riggins, it was in the midst of a short stay. “I’m going home for two weeks and I’m coming right back,” Vander Esch proclaimed in early January. “I’m going to be here (in Dallas) training all the way through February, March and April.” A neck injury kept him out of eight games in 2019, and a broken collarbone and ankle sprain shelved him for six games this past season. Vander Esch made 140 tackles as a Pro Bowl-bound rookie and has just 132 stops in the two seasons since. Our wish for LVE as he enters his second quarter-century: a year of good health.

The Mayors Cup will end up spending the year on the shelf. Try as they might, College of Idaho and Northwest Nazarene men won’t be able to play their game Wednesday night. It wasn’t officially designated as the United Heritage Mayors Cup due to season-long uncertainty on both sides, but both sides assure fans they’ll be rekindling the annual event this November. The Coyotes, who have played just two games since January 7, are planning on hosting Multnomah on Friday and Saturday. Next on NNU’s schedule is a game at Central Washington on Saturday. The 8-1 Nighthawks will bring with them the Great Northwest Athletic Conference Player of the Week, Ezekiel Alley, who scored 27 points in last Friday’s 93-81 win over Lewis-Clark State.

February 9, 2010: As a sidebar during a press conference introducing his new chief operating officer, Pac-10 commissioner Larry Scott announces the conference will be exploring expansion over the next year. And boom—it was a top story, with speculation running wild. The most plausible scenario immediately painted was Utah and Colorado moving to the Pac-10, creating a chaotic trickle-down effect that would influence the future of the Mountain West and the WAC. The two years that followed featured seismic change, including Boise State’s move to the Mountain West.

What we think we saw Saturday