Boise State’s struggles on special teams in 2018 have been well-chronicled. But perhaps the Broncos’ cleanest special teams performance of last season came in the 48-38 win at Air Force. Haden Hoggarth made both of his field goals, the second one a season-long 47-yarder, eight of Quinn Skillin’s nine kickoffs were touchbacks, Skillin’s only punt of the night went for 46 yards, and Avery Williams returned a punt 67 yards to set up a pivotal third-quarter touchdown. Maybe there were some letdowns in the Falcons’ special team units, but it was more like Boise State playing like it’s supposed to play. The Broncos are coming off their best special teams night of the young 2019 season, and they need to sustain that Friday night.

The highlight against Portland State was obviously John Hightower’s 98-yard kickoff return for a touchdown the first time the Broncos touched the ball. The Vikings didn’t test Hightower again as they went to pooch kicks, giving Nick Provenzano what will probably be the only return of his career (10 yards). Plus, Williams broke a 28-yard punt return. But there are blemishes. Before Hightower’s fireworks, Boise State had an offside penalty on the game’s opening kickoff. And before the first quarter was over, Joel Velazquez had shanked a 24-yard punt (although seven of his eight kickoffs on the night went for touchbacks).

THE CLOCK TICKS WITHOUT PICKS

Is it too early to be concerned about Boise State’s lack of interceptions? The Broncos have only one pick in the first three games, the acrobatic one by Kekoa Nawahine against Marshall. They’re on pace for a grand total of four during the regular season. That could change quickly, even against Air Force. But it’s difficult not to look back at last year, when Boise State made only seven interceptions, ranking No. 102 in the country. The Broncos balanced it out with 17 fumble recoveries, the most in the nation. That’s helped this season, as they’ve recovered three. But Boise State didn’t force a turnover of any kind last Saturday versus Portland State.

Chase Cord is a unique figure in the Boise State football program. He’s a backup quarterback, but it doesn’t really feel that way. Hank Bachmeier remains the Broncos’ clear-cut starter, and he should be. But Cord is QB1A after a strong second-half performance last Saturday. What’s evident is how teammates and coaches are genuinely pulling for Cord as the one-year anniversary of his torn ACL approaches. “It was emotional,” said coach Bryan Harsin of Cord’s picture-perfect 33-yard touchdown pass to CT Thomas. “He took one of the best five-step drops I’ve ever seen from one of our quarterbacks and laid a dime up to CT.” Harsin was most excited about Cord’s 29-yard scramble, when he put his head down at the end of the run for extra yardage. “(It was like) boom—I need that as a player,” Harsin said.

GIVE UCF ITS DUE

There’s been a lot of jousting back and forth between Boise State and UCF fans over who’s the preeminent Group of 5 program in the country. In the 21st century, it’s the Broncos. But you’ve got to hand it to the Knights. They’re tops the past three years. And in 2019, like Boise State, UCF is getting it done with a true freshman quarterback. Dillon Gabriel threw for 347 yards and four touchdowns as the Knights dismantled Stanford 45-27 last week in a game that wasn’t as close as the score indicated. They should be ranked higher than Nos. 15 and 16 in the polls. The other part of the picture is the atmosphere at Spectrum Stadium in Orlando. It was full, with 45,008 in the seats. And it was very loud. UCF gets another Power 5 shot Saturday at Pitt.

VANDALS LOOK AT TURNING THE CORNER

The 2019 Big Sky preseason poll predicted Eastern Washington to finish first, UC Davis second, Idaho State seventh and Idaho eighth. The Vandals’ game against the Eagles Saturday in the Kibbie Dome won’t have any bearing on the league standings, because it’s a non-conference game, with both schools using it as a quality schedule-filler. But it could have a big effect on Idaho’s mindset the rest of the season. Despite a 79-7 waxing at Penn State 2½ weeks ago, the Vandals can go with “you’re only as good as your last game,” and that was a valiant effort in last Saturday’s 21-16 loss at Wyoming. Eastern has become a perennial Big Sky power, but it’s still a bit of a mystery. The No. 4 Eagles lost a last-minute decision at No. 17 Jacksonville State last week, 49-45. This would be big for Idaho.

AND THIS WOULD BE BIG FOR HAWK…

As for former Boise State coach Dan Hawkins and UC Davis, they’ll be playing the FCS Game of the Week Saturday at defending national champion North Dakota State. The Bison are No. 1 in the rankings and the Aggies are No. 4, yet UCD goes to Fargo as a 25½-point underdog. Hawkins hopes his quarterback, Jake Maier, has something to say about that. Maier is a wily senior, a preseason FCS All-American who has thrown 66 career touchdown passes for the Aggies. This is a supreme test, though. Hawkins said on Idaho SportsTalk Tuesday that NDSU “operates like an FBS program.” In fact, with seven of the last eight FCS championship trophies in the case, you wonder why the Bison aren’t in the FBS.

A HICCUP FOR HUTCHISON

Catching up on former Boise State star Chandler Hutchison in Chicago. The Bulls’ Twitter account reported that Hutchison suffered a left hamstring strain two weeks ago today while working out and “will be re-evaluated regularly, as he progresses through his rehabilitation.” Another report says an MRI confirmed that it’s a strain, so now the Bulls wait to see if Hutchison will be ready for training camp two weeks from now. Fans are not happy. Some are trying to label Hutch as an injury magnet, and others are blaming Chicago’s training staff. His rookie season ended in late January due to a fractured toe.

This Day In Sports…brought to you by COLTRIN CENTRAL VAC…home of the VROOM Garage Retract Vac!

September 18, 2009, 10 years ago today: Boise State clears one of its biggest hurdles on the way to an undefeated season with a wild 51-34 win at Fresno State. The Broncos had three scoring plays of 60-plus yards, including one that saw Titus Young recover a fumble in the end zone after Jeremy Avery had run for 74 yards. Bulldog tailback Ryan Mathews had three touchdown jaunts of 60-plus yards himself and rushed for 234 yards. Avery ran for 186 yards on only 11 attempts for a school-record 16.9 yards per carry. 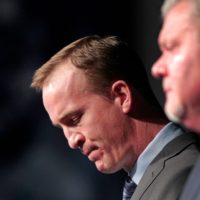