ESPN is on board with the consensus out there—Boise State’s Chandler Hutchison will be selected by the Chicago Bulls with the No. 22 overall pick next week. Here’s the synopsis in the latest NBA mock draft from ESPN Insider: “Chicago’s wing rotation could certainly use more depth, and Hutchison’s size, athleticism and ability to create his own shot are intriguing in a league that is starved for players at his position. Hutchison has made significant strides with his game as a senior. He looks primed to take advantage of the lack of wings in the draft—and the NBA in general. He has outstanding physical tools and is a much-improved ball handler and perimeter shooter. Hutchison is reported to have a ‘promise’ after he skipped the combine and canceled all his workouts.”

Here’s a number I don’t think we’ve seen before. ESPN scaled the starting salaries of the first-rounders and has Hutchison at $1,974,480. Not a bad beginning. He’s the rare guy these days who has something to fall back on, too. Boise State coach Leon Rice points out that according to every mock drafts he’s seen, Hutchison is going to be the only first round pick holding a college degree next week. (If Duke’s Grayson Allen is also selected in the first round, there’ll be two.) Hutchison walked across the stage at Taco Bell Arena on May 5. Of course, he worked out for two hours just before the graduation ceremony.

Four players predicted to go in the first round by ESPN were in Taco Bell Arena for the NCAA Tournament about three months ago, including the No. 1 overall projection. Just goes to show how special it is to have the Big Dance come through Boise. Arizona center Deandre Ayton is tabbed as the top overall pick, going up the road to Phoenix. Forward Kevin Knox of Kentucky is the No. 11 overall projection, going to Charlotte. UK guard Shai Gilgeous-Alexander is projected as the No. 12 overall choice by the L.A. Clippers. And Ohio State forward Keita Bates-Diop of Ohio State is anticipated to be the No. 20 pick by Minnesota. In fact, two more UK Wildcats are projected to go in the second round, guard Hamidou Diallo and forward Jarred Vanderbilt.

NFL voluntary OTAs have morphed right into mandatory team minicamps, and the one in Dallas yesterday started without Leighton Vander Esch. The former Boise State star and No. 19 overall draft pick is still bothered by a sprained ankle he suffered at the end of OTAs last week. Around the Cowboys camp they’re still calling it “minor.” Speculation is the team wants to make sure Vander Esch is fully healthy for training camp next month and may hold him out of the entire minicamp as a precaution. Former Bronco Cedrick Wilson is active this week and continues to be a trendy pick as a guy who could make an impact in the Dallas wide receivers room in 2018.

Adidas has to be tempting as it gets more aggressive with college athletics partnerships. Washington, for example, bolted from Nike to Adidas last month for $120 million over 10 years. It’s all relative, though, as Nevada just switched from Nike to Adidas for a seven-year contract worth a reported $900,000 per year. But alas, Boise State has elected to stay with Nike, agreeing to a six-year extension at more than $2 million per year, nearly double that of the previous deal with the shoes and apparel giant. It includes cash compensation and product for each of the Broncos’ 20 varsity programs. Boise State football has been in partnership with Nike since 2003, and the university entered into its first all-sports agreement with the brand in 2011.

Idaho football has its first national ranking since 1995. It’s not in an official poll, but it still counts. It comes in the HERO Sports FCS Top 25 Preseason Poll, released yesterday. The Vandals were No. 23 on the list as they prepare for their return to the Big Sky this season. They were last ranked in their final season the last time they played in the Big Sky in 1995—No. 17 in the Sports Network Poll at the end of the regular season. Three other Big Sky teams appeared: No. 4 Eastern Washington, No. 18 Weber State and No. 22 UC Davis. (What? No Montana?) Idaho plays its first conference game in Davis against the Aggies and coach Dan Hawkins on September 22.

The ECHL now looks ahead to life without the Colorado Eagles, and vice versa. The Eagles wrapped up their stay in the league in style last Saturday night, beating the Florida Everblades 3-2 in a thrilling Game 7 of the Kelly Cup Finals to capture a second straight ECHL championship. Colorado had trailed in the series three games to two before fending off Florida in the final two contests (including a rally from a 2-1 third-period deficit in the finale). It was the Eagles who swept the Idaho Steelheads out of the playoffs last month. Colorado now moves to the American Hockey League next season as the top affiliate of the Colorado Avalanche.

A couple local pro notes: Centennial High grad Sofia Huerta started and played 76 minutes for the U.S. Women’s National Soccer Team last night in a 1-0 win over China at an international friendly in Cleveland. Huerta logged on shot on goal and two fouls. And the Boise Hawks are back in town, getting settled and squeezing in a couple practices before they open the 2018 season on the road at Spokane Friday night. The home opener at Memorial Stadium is next Wednesday against the Salem-Keizer Volcanoes.

June 13, 2000: Steve Young announces his retirement from the San Francisco 49ers. Young successfully emerged from the longest shadow imaginable—that of four-time Super Bowl champion quarterback Joe Montana—to become the highest-rated passer in NFL history. Young won one Super Bowl and yearned for another. But four concussions, the final one early in the 1999 season, spelled the end for the former BYU star and future Hall Of Famer. 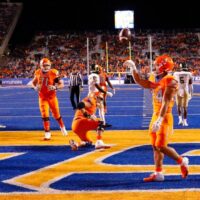 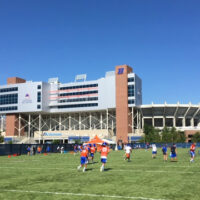