In a February, 2015, interview at Idaho’s Scout.com fan site, former Vandals athletic director Rob Spear envisioned a four or five-year timeline for the opening of the long-awaited and anticipated new arena adjacent to the Kibbie Dome. “It is something that is going to require all of our alumni and boosters to take part in, and prove to people in this state that the University of Idaho can take on a significant project and get it done,” said Spear at the time. Better late than never. Idaho will break ground on ICCU Arena on Thursday, with the 4,200-seat “engineered wood mass-timber facility” slated to open in 2021 as the home for Vandals’ basketball programs and campus and community events. The university notes that the project that has been envisioned for the past 50 years. (And sorely needed for at least the last 30.)

BRONCOS LOOK FOR AN IMPACT ASSISTANT

It’s kind of late in the game for a college basketball program to be searching for a key assistant coach, but that’s the hand Boise State coach Leon Rice has been dealt with San Diego State hiring Chris Acker away from the Broncos. As much credit as Acker has garnered for elevating Derrick Alston to star status last season at Boise State, it’s important for Rice to find a developmental guy as expectations are high for redshirt freshmen Mikey Frazier, Derek Abercrombie and Max Rice, not to mention highly-touted true freshman RayJ Dennis. It would also help if RJ Williams can be “redeveloped” to return to the playmaking form he showed during the the Broncos’ non-conference schedule last season.

Anthony Mathis has put New Mexico through the wringer. First, the Lobos’ leading scorer in 2018-19 assumed he was out of eligibility after what was listed as his senior season. Then in April, the NCAA surprisingly granted Mathis an extra year, thanks to an appeal that UNM put together over the 64 minutes he played as a sophomore during Craig Neal’s dysfunctional final season as coach. Mathis was excited when he got the extra year, as were Lobos fans, who understandably feel blindsided now. “To be able to come back and truly have a full career here is absolutely a dream come true,” Mathis said in April. The Albuquerque Journal points out that Mathis’ best friend is Oregon star Payton Pritchard. Maybe Boise State will see him one more time in Eugene this coming season?

WE’RE NOT IN IDAHO ANYMORE, TOTO

One little tornado in the hills east of Mountain Home, and Phil Steele moves Boise State into the Midwest. But if the trade-off is Curtis Weaver making one of Steele’s regional covers for his popular college football preview magazine, the Broncos will take it. Really, how did Boise State end up in the Midwest? We’ll have to wait until the magazine hits newsstands on June 25 to find out. Weaver appears alongside Colorado’s Laviska Shenault, Oklahoma’s CeeDee Lamb and Nebraska’s Adrian Martinez. One thing is certain: whereas Brett Rypien was the face of the Bronco program last season (and before), Weaver is this year. The junior STUD end/linebacker a prime candidate for Mountain West Preseason Defensive Player of the Year honors, and he’s a possible early entry into the NFL Draft in 2020.

The once-depleted Boise State linebacker corps appears to have been repaired (assuming Riley Whimpey’s knee has been, too). With Josh Booker-Brown having joined the Broncos as a 2019 signee out of Pearl River Community College in Mississippi, there’s legitimate depth now. The 6-3, 238-pound Booker-Brown made 41 tackles in nine games last season with two sacks and three blocked kicks. His brother Nick is a senior defensive tackle at Westfield High in Houston and has a scholarship offer from Boise State. Say the name, and longtime Bronco followers are reminded of a basketball player in the early 1970’s named Booker Brown. He was a guard, and he was a very good player.

A SEMINOLE HOLE AT TACKLE

A story at Florida State fan site NoleGameday.com reports that the Seminoles have lost a starting offensive lineman, as Landon Dickerson plans to head for Alabama as a graduate transfer with two years of eligibility remaining. Dickerson, who began last year as an FSU starter, ended up redshirting after an early-season injury. While Florida State is piecing things together up front, season-opening opponent Boise State has all five starters returning on the O-line. Both teams will be breaking in new starters at quarterback.

Leighton Vander Esch’s interview with Caves & Prater on Idaho SportsTalk on Friday was classic. They didn’t have to ask the Dallas Cowboys star about being humble. The 2018 rookie sensation and Pro Bowler just is. It comes right through the radio. Vander Esch’s issue now is a pelvic injury that has kept him out of the Cowboys’ OTAs, which wrap up this week. The former Boise State star attributes the injury to the amount of work his body endured over the past couple of years without a break. “There’s no reason to rush back—it’s going to set you back even further,” said Vander Esch. LVE has remained grounded despite his sudden fame in Dallas. “I just want to be considered a small-town dude from Riggins,” Vander Esch said, adding that he’ll be spending “about a month” in his hometown this summer.

NO CIGAR FOR MERRITT

Sometimes the weekend bites Meridian’s Troy Merritt. It not only got him Saturday and Sunday in Dublin, OH, the Monday blahs hit yesterday in nearby Springfield. When Merritt finished the second round of The Memorial Tournament Friday, he was the leader in the clubhouse by two strokes. At the end of the day he was tied for the lead. But Merritt went 74-73 over the final two rounds and tied for 17th (although he still made $127,400). On Monday he played the U.S. Open Sectional in Springfield, OH, but he missed qualifying for Pebble Beach by three strokes.

June 4, 2009, 10 years ago today: On his first attempt, Randy Johnson becomes the 24th major league pitcher and only the sixth left-hander in history to reach 300 career wins. The Big Unit, pitching for the San Francisco Giants at the age of 45, topped the Washington Nationals 5-1 to reach the milestone. Johnson, a five-time Cy Young Award winner, possessed a 100 miles-per-hour fastball in his prime. Later, it was his guile that stood the test of time. 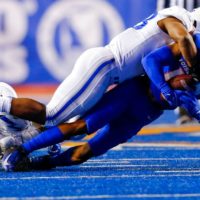 A streak that really matters