I’ve heard it said this week that the humidity in Lafayette, LA, is expected to be about 75 percent a week from tomorrow, and that “it’s no big deal.” I beg to differ. In a place like Boise where the hotter it gets, the drier it gets (100 degrees and 10 percent, anyone?), you definitely feel 75 percent humidity and the temperature is in the 80’s. Boise State is prepping for that the way it has before in such situations, by watering down the turf and cranking up the heat in the Caven-Williams indoor facility to create a sweatbox. One guy who’s had access to practice this week told me, “I had to go outside a few times to breathe.” Perfect. I suspect the Broncos first studied dehydration when things blew up on them in the 48-13 loss to Georgia on, coincidentally, September 3, 2005.

When you talk about that kind of oppressive heat, depth is of the essence. That aspect will be particularly tested on Boise State’s inexperienced—albeit talented—defensive line. Three names have fans curious. One is Sam Whitney, who’s being mentioned in the same breath as Jabril Frazier and Gabe Perez in the battle to start at the STUD position. Whitney is only 6-2, 234 pounds, but the kudos from coach Bryan Harsin have been coming his way since last spring. There’s also Sonatane Lui, a returned LDS missionary who is technically a true freshman. Lui is on the Bronco two-deep at tackle. “He’s a tough guy to block,” said Harsin. “Sometimes at that position, you’re not out there just to create havoc. You’re there to hold your spot, and he seems to do that.”

Daniel Auelea was brought in for instant impact at defensive tackle from Mesa Community College, so expect him to play. The 6-2, 290-pounder has a Justin Taimatuia-type build; Boise State sure hopes Auelua plays like him. Auelua knows how to tackle. He played rugby for United Rugby Club, a high school-level team that earned a national runner-up finish while he was there.

The college football season is about to begin—tomorrow if you’re in Australia, tonight if you’re in the U.S. Cal and Hawaii play in the Sydney Cup, with a crowd of 65,000 expected. The Rainbow Warriors could take their lumps. They’re 11-39 overall and 4-28 in the Mountain West since moving to the conference four years ago. But they will enjoy the journey for a change. Nick Rolovich, the only new head coach in the conference, has changed Hawaii’s mindset. “They had been beaten up pretty good,” said Rolovich of his first meeting with his players last winter. “I looked in these guys’ eyes and there was an emptiness I’d never seen in that room before.”

During spring football, Rolovich walked back into that room with an Army helmet, a crazy outfit, black paint streaked across his face and a super soaker. The team, which was supposed to have an off day, was given a note to meet at the practice field. It read, in part, “We declare war.” What ensued was a water gun and water balloon fight. Rolovich says he wants to redevelop the “brotherhood” in UH football. He’ll have plenty of time to do that—the Warriors next game is at Michigan, nine time zones away. Hawaii has seven road games this year and will rack up almost 50,000 miles of air travel.

The third game of the NFL preseason schedule is the one that often establishes a team’s starting lineups and rotations. Last night for Miami, Jay Ajayi rushed for just 11 yards on seven carries while making two catches for 12 yards in the Dolphins’ 17-6 win over Atlanta. It’s not like Arian Foster is taking the job away from Ajayi, but the former Boise State star hasn’t done much to claim it yet. In Seattle, we thought the Seahawks’ Rees Odhiambo might have a chance to block the Cowboys’ Tyrone Crawford and Demarcus Lawrence, but Crawford did not play and Lawrence played sparingly. Fellow former Bronco Orlando Scandrick was out, too, expected to miss the rest of the preseason with a groin strain. Ex-Idaho Vandal Benson Mayowa had two tackles, one for loss, for Dallas.

It looks like Jamar Taylor, less than six months after having been declared a bust with the Miami Dolphins, has earned a starting job at cornerback with Cleveland. The former Boise State star was working again as a first-teamer this week opposite two-time Pro Bowl selection Joe Haden in a joint practice with Tampa Bay. There was affirmation for Browns coach Hue Jackson—and Haden—when Taylor intercepted a pass that deflected off a wide receiver in an 11-on-11 period. “I like Jamar’s game,” Haden said. “He’s really, really quick. He’s able to make very sudden movements and come out of his breaks extremely fast.” Taylor, a second-round draft pick of the Dolphins in 2013, is making the most of his fresh start. He may get a chance to tackle old teammate Doug Martin tonight, as the Browns visit the Buccaneers.

By the PGA Tour’s calculation, Graham DeLaet and Troy Merritt will have to tickle the top 30 this week at The Barclays to advance in the FedExCup Playoffs. So with that to set the scene, it isn’t going so well after one round at Bethpage Black. DeLaet is tied for 69th after a two-over 73, and Merritt is tied for 99th following a four-over 75. DeLaet is projected at No. 121 in the FedExCup standings after the first roud and would need to finish 34th or above, and Merritt, who drops to No. 122, would need a 32nd-place result.

This is not about Javier Baez’s batting average or RBI total. It’s about the former Boise Hawk’s true value to the Chicago Cubs. And that, it turns out, is on defense. Scott Spratt at ESPN.com Insider notes that “Baez was a shortstop through the minor leagues, but the Cubs are so loaded with talent in the majors that he has become a super-utility player this season. Given that Baez has saved the team three runs in just 114 innings at shortstop this season, it’s no surprise that he has been exceptional at the less-demanding second base. There, he has saved the team six runs in just 267.2 innings. That puts him fifth overall at the position, and the four players in front of him each have more than three times as many innings.” With that said, his bat has been good, too—he’s hitting .275 with 13 home runs and 47 RBIs.

A couple other notes: Boise’s Brian Scott is finally on an upward trajectory in the Sprint Cup Series as the summer wears on, peaking with an 18th-place finish last Saturday night at the popular Bristol Motor Speedway stop in Tennessee. It was Scott’s best race since a season-high 11th-place result in May and his third straight event in the top 25. He’s now 33rd in Sprint Cup driver standings. This week it’s on to the Pure Michigan 400 at Michigan International Speedway. And the Boise State women’s soccer team, 1-0 on the season, has two weekend games at the Boas Complex—today against three-time defending WAC champion Seattle University and Sunday versus UC Irvine.

Kansas City ace Bret Saberhagen throws a no-hitter in his final season with the Royals, handcuffing the White Sox, 7-0. No KC pitcher has tossed a no-hitter since. The highlight of Saberhagen’s career, though, was the 1985 World Series, when he led the Royals past the St. Louis Cardinals. Saberhagen pitched two complete games in the Series, including a shutout in Game 7. 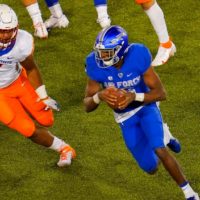 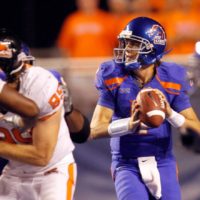