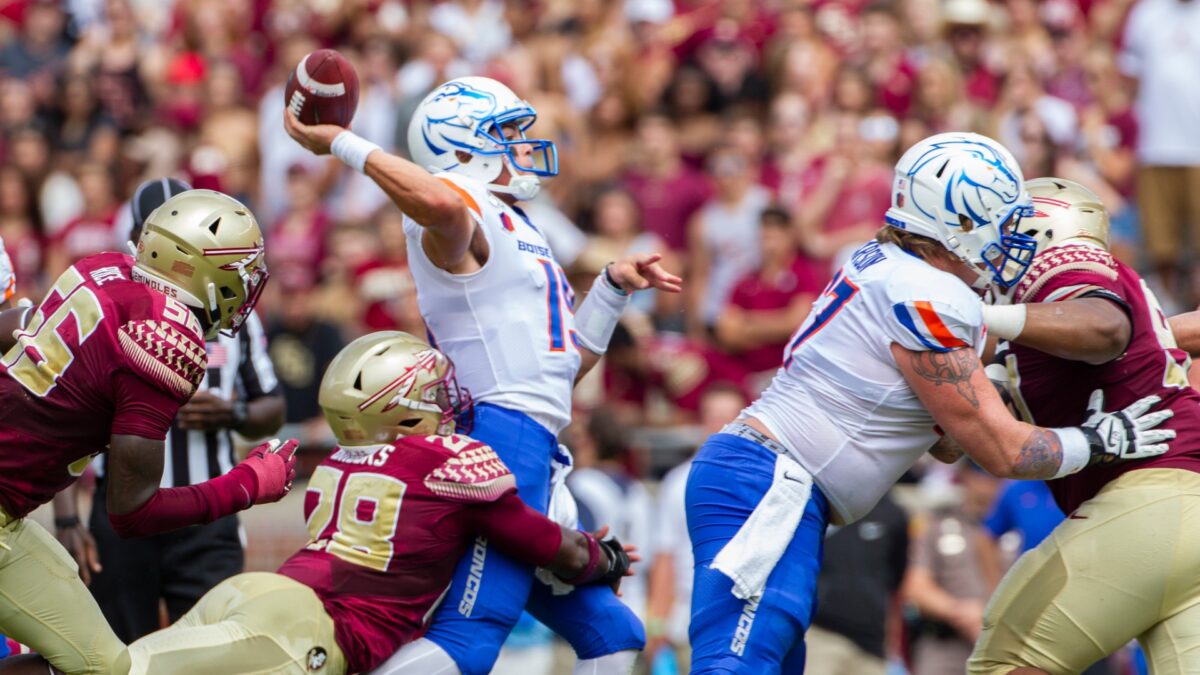 The dynamic appears to have changed in the Boise State quarterback race. Reading between all the lines, it’s Hank Bachmeier’s job to lose now, if only because Jack Sears is dealing with what coach Andy Avalos calls “a lower leg injury.” Sears wasn’t able to participate in the Broncos’ scrimmage on Saturday—Avalos said during his Sunday press conference that he expects him back “the middle of this week.” At the same time, Avalos said that Bachmeier on Saturday “had his best grade overall” of any scrimmage this this year. Avalos says the two QBs’ “production and execution are pretty close.” But it’s getting late.

“Tentative” is a word I’d use to describe Bachmeier last season. It actually started in the 2019 Las Vegas Bowl against Washington, but he may be past all that now. It sure feels like confidence is creeping back into the picture for the quarterback who began his career a house afire at Florida State two years ago with a 400-yard game in the win over the Seminoles. “He’s reduced the times in which he holds onto the ball too long and puts himself into a situation where he’s going to create a negative yardage play,” said Avalos. And isn’t that what everybody’s been waiting to hear? Bachmeier was sacked 10 times in four games last year, and it wasn’t all on the offensive line. “His timing and his progressions were on point (Saturday),” Avalos said. “He’s improved that a ton.”

Of note among former Boise State stars in NFL preseason Week 1: Avery Williams stood out in his Atlanta debut, returning three kickoffs for 85 yards, including a 38-yard runback that led to the Falcons’ only points of the game in a 23-3 loss to Tennessee. The fifth-round pick also had two punt returns for 20 yards, plus a tackle and a pass breakup on defense. Williams did not disappoint. Brett Rypien, stuck behind Drew Lock and Teddy Bridgewater and their battle to become Denver’s starter, came in toward the end of the third quarter and finished the Broncos’ 33-6 win at Minnesota. Rypien was just 2-for-7 for 24 yards. Alexander Mattison was held out by the Vikings. And David Moa, trying to make the New York Giants roster as an undrafted free agent, logged four tackles in a 12-7 loss to the Jets.

If “one game at a time” is going to be the mantra for Boise State men’s basketball during the Mountain West season, then Fresno State is the perfect way to start it. The conference schedule was unveiled Friday, and the Bulldogs will be in ExtraMile Arena for the Mountain West opener December 28, just like they were for the fateful end to the Broncos’ regular season last March. That was the stunning 67-64 loss to Fresno State that effectively ended Boise State’s hopes of an at-large berth in the NCAA Tournament. As good as coach Leon Rice’s roster is going to be, it’s not getting the preseason love that it did a year ago. CBS Sports and College Hoops Today insider Jon Rothstein has the Broncos fifth in his preseason power rankings behind Nevada, Colorado State, San Diego State and UNLV.

Justinian Jessup started again in Golden State’s two weekend games in the NBA Summer League in Las Vegas. The former Boise State standout scored eight points in the Warriors’ 94-84 win over Oklahoma City on Friday—then followed with his best game of the summer Sunday night. Jessup was 2-for-8 from three-point range, but he put up 16 points, going 7-for-16 from the field overall, and had a team-leading plus-minus rating of plus-15 in an 80-79 overtime loss to New Orleans. It didn’t look good for Derrick Alston Jr.Friday as he did not play for the Warriors against the Thunder, but he had a very productive 14 minutes versus the Pelicans, scoring eight points with two three-pointers and adding four rebounds.

It’s Albertsons Boise Open week at Hillcrest Country Club, and with it the comes the first leg of the Korn Ferry Tour Finals. The field, which includes the top 25 from the Korn Ferry this season and Nos. 126 through 200 on the PGA Tour money list, will be interesting. Some big names just missed qualifying automatically for the FedExCup Playoffs—like Justin Rose, Camilo Villegas, Rory Sabbatini, Rickie Fowler and Tommy Fleetwood. That doesn’t mean they’ll all be in Boise, but this bears watching. Former Boise State star Troy Merritt, by the way, is No. 69 in FedExCup standings, meaning he has qualified for playoff spots in not only the Northern Trust this week, but the BMW Championship next week.

The Boise Hawks scored all 14 of their runs in the first three innings Sunday night and rolled to a 14-10 win over Idaho Falls at Memorial Stadium. Nate Fisbeck hit his sixth home run in 14 games with the Hawks, a two-run shot that gave him 22 RBIs. Fisbeck is batting .404. Five Boise hitters had multi-hit games; Roby Enriquez went 3-for-5, scored three runs and knocked in two. The victory was the Hawks’ 10th in the past 14 games.

College of Idaho’s Purple & Gold Scrimmage Friday night didn’t decide anything in the Coyotes’ three-way quarterback race, partly because the defense dominated. The numbers for all three of the contenders—Jacob Holcomb, Ryan Hibbs and Jack Rice—were similar. Rice had the only touchdown pass of the evening, but he also had the only two interceptions. About 800 fans were in attendance, and they had to like what they saw on the other side of the ball. The Yotes defense was stout up front, limiting the offense to less than three yards per carry over 35 of the 37 running attempts in the controlled session.

This Day In Sports…August 16, 1965: After five increasingly successful seasons and about to enter a sixth, the American Football League awards its first expansion franchise to Miami. The team would be named the Dolphins and would debut in 1966. Two years later, with the AFL-NFL merger already announced and interleague play set to begin in 1970, the AFL expanded again, awarding a franchise to Cincinnati. The Bengals began play in 1968. The original eight AFL franchises were the Boston Patriots, Buffalo Bills, Dallas Texans (now the Kansas City Chiefs), Denver Broncos, Houston Oilers (now the Tennessee Titans), L.A. Chargers, Oakland Raiders and New York Titans (now the Jets).