Sean Modster did his best Cedrick Wilson/Thomas Sperbeck impression last Saturday at Troy, making seven catches for 167 yards and two touchdowns. But you could tell while watching the game that Boise State is deep and talented at the wide receiver position. CT Thomas also had a breakout game, while A.J. Richardson was biding his time with a quiet but effective day. We could see several Broncos take turns notching 100-yard games this season. Will someone other than Modster reach that plateau in the home opener tomorrow night against UConn? John Hightower could do it eventually, once he and Brett Rypien get on the same page. And what to make of highly-touted true freshman Khalil Shakir? His first touch as a Bronco—and his only one so far—was an 11-yard loss on a reverse. That will not be the norm for Shakir.

While Boise State seems to be a very together team right now, UConn appears to be less so. Running back Kevin Mensah apparently questioned the commitment of some of his teammates after last week’s 56-17 loss to UCF. Mensah tweeted, “It’s very tough because I don’t think a lot of people are bought in right now. I don’t think they’re really involved in us coming together. I don’t think some of the people buy into what coach Edsall was saying…” Randy Edsall, understandably, wishes Mensah had handled his feelings differently. “Kevin has to learn there’s certain things you say to you guys (media) in a public forum, and there’s things you say in the locker room,” Edsall said at his Tuesday press conference. “And that’s something that should be said in the locker room.”

Connecticut is loaded with freshmen. In fact, all four starters on the defensive line tomorrow night will be freshmen, two right out of high school. Edsall saw some deer-in-headlights against UCF and wants his young guys to become “comfortable being uncomfortable.” You’ve gotta love the coach’s take on it. “When we had to pick up the phone and we wanted to ask that girl to go out with us and dad answered the phone, then you had to deal with talking to the father,” Edsall said in the Hartford Currant. “You didn’t have to just text, ‘Hey honey, how are you, can I go out with you?’ or maybe FaceTime with them. (Today’s college kids) never had to face adversity.” Heck, I faced enough adversity just talking to the girl.

This Boise State-UConn game drums up memories of Bryan Harsin’s first season as head coach, when the Broncos beat the Huskies 38-21 in East Hartford in Week 3. Grant Hedrick threw a touchdown pass to Matt Miller, Miller tossed a TD to Hedrick, then Hedrick threw another one to Miller. Boise State was 2-1 at the time but would end up in the Fiesta Bowl. The Huskies, coached by Bob Diaco, were in a major slide just four years after UConn played in the Fiesta Bowl under Edsall, who parlayed that into a job at Maryland. Edsall returned to UConn last year after Diaco was fired. Between the two stints, this is Edsall’s 14th season as the Huskies’ head coach.

Not to pile on Colorado State, because it doesn’t do the Mountain West any favors. But CSU made ESPN’s “Bottom 10” this week. The narrative: “The Rams have been ramrodded two weeks in a row, one of only two 0-2 teams in the nation, and their next two games are against SEC opponents, Arkansas and Florida. Suddenly, that Oct. 6 trip to San No-se State is feeling kind of huge. Like, ‘Pillow Fight of the Century/hosting Bottom 10 GameDay’ huge.” Colorado State hosts Arkansas tomorrow. Elsewhere, Fresno State is probably the MW’s primary hope for getting that elusive win against the Power 5. The Bulldogs haven’t beaten a Power 5 school since walloping Colorado 69-12 back in 2012, Derek Carr’s junior year.

The Idaho Vandals need some confidence, and Division II Western New Mexico should provide it in the home opener tomorrow in the Kibbie Dome. The Mustangs kicked off their season last Saturday at San Diego, losing 38-9 against the Toreros, a non-scholarship FCS team. The crowd in Moscow will be interesting—Idaho’s 79-13 drubbing at the hands of Fresno State last week was a buzz-killer. College of Idaho needs confidence, too, after an 0-2 start. But the Yotes are unlikely to get it tomorrow at Southern Oregon. The Raiders have made the NAIA Playoffs in four of the last six seasons, winning it all in 2014 and making the semifinals last year. SOU swept the home-and-home series versus C of I last season.

A joyous start for Jay Ajayi. The former Boise State star scored the first touchdown of the 2018 NFL season last night—then added another with 2:19 left in the game, plus a two-point conversion, to lead Philadelphia past Atlanta 18-12. Ajayi rushed for 62 yards on 15 carries, but you get the sense it could have been a lot more. He was in for only nine snaps in the first half while the Eagles went with a heavy dose of Darren Sproles. Ajayi was hardly in the “workhorse” category. Philly should give him the ball more, methinks.

As the NFL season dawns, we’ll see what new roles await the Boise State guys who switched teams in the past month. Orlando Scandrick is now two teams removed from the Dallas Cowboys, landing in Kansas City after being released by Washington. Scandrick was lukewarm in the preseason. George Iloka will be wearing a Minnesota Vikings jersey, and it’ll have No. 23 on it. Iloka told the Pioneer Press he “grew up liking 23” as a big fan of Michael Jordan and that “23 in any sport is good.” But he primarily wanted the number as a tribute to Terence Newman, his former teammate with Cincinnati and now Minnesota’s defensive backs coach. And Kamalei Correa is poised to get a fresh start in Tennessee after being traded from Baltimore—it remains to be seen what kind of opportunity that presents.

The Web.com Tour Finals are halfway over, taking this week off before the Albertsons Boise Open fires up next Thursday. This is the sixth season the Web.com Finals are determining PGA Tour card status for players who don’t already have one. There have been two Ohio stops so far, the Nationwide Children’s Hospital Championship in Columbus two weeks ago, followed by the DAP Championship last week outside Cleveland. There was a nice Albertsons Boise Open table-setter in the final round of the DAP last Sunday. A golfer named Anders Albertson tied the course record with a seven-under 63.

September 7, 2011: Four days after Boise State smothers Georgia 35-21 in the Chick-fil-A Kickoff Game in Atlanta’s Georgia Dome, Bronco senior quarterback Kellen Moore appears on one of two regional covers of Sports Illustrated. Moore had helped exorcise the demons of BSU’s devastating loss at Georgia in 2005 by dissecting the Bulldogs on 28-of-34 passing for 261 yards and three touchdowns, surpassing 100 TD passes for his career. The Boise State defense did its part by recording six sacks on Georgia quarterback Aaron Murray. It was the Broncos’ first-ever win over an SEC school. 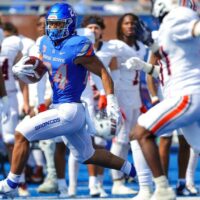 Circling the wagons on sack attacks