The longer the game went Saturday night in Taco Bell Arena, the louder it got. And the game went long, with Boise State outlasting UNLV 93-91 in overtime. The second sellout crowd of the season brought it, and it helped the Broncos survive at the end. (Why a sellout totals only 10,737 is still baffling, but that’s a story for another day.) Vocal cords were running on empty. Boise State had to weather 12 lead changes and the Rebels’ athleticism, the best in the Mountain West. The Broncos built a 12-point lead with just under 12 minutes left. That evaporated. They got it back to eight with 2½ minutes left. That disappeared as well, sending the contest to OT. You wonder how they did it. Well, Boise State, beset at times with turnovers this season, gave it away just seven times against UNLV, a season low.

Sitting courtside Saturday night was Bob Myers, the general manager of the reigning NBA champion Golden State Warriors. He was there evaluating Chandler Hutchison, right? The Boise State star responded with a spotty night. Hutchison scored 21 points, but he went 6-for-18 from the field, 1-for-8 from three-point range and pulled down only two rebounds. On the other hand, he dished out eight assists. Part of the reason was Brandon McCoy. Yes, Myers was certainly in Boise to watch him, too. UNLV’s 7-1 true freshman showed why he’s a likely one-and-done guy. McCoy scored 24 points—but just as importantly, he clogged the paint, rendering the Broncos incapable of getting shots off. That forced Hutchison and his teammates to kick the ball outside. Fortunately, some crucial three-pointers were waiting.

Justinian Jessup was back in the starting lineup, replacing Alex Hobbs. And Jessup reverted back to old form, nailing five of his eight three-point attempts and scoring 17 points. He drilled three treys in less than two minutes early in the second half to change the momentum of the game. On the KBOI postgame show, Jessup mentioned the new lights in Taco Bell Arena. They are apparently to his liking. “It makes it like an NBA Arena,” said Jessup. Boise State shot in the new lighting configuration for the first time in Saturday’s shootaround. I don’t know if it helps rebounding, too, but Jessup led Bronco with seven of those. The facility is just about ready for its first NCAA Tournament in nine years next month.

Jay Ajayi is a Super Bowl champion—and the first one on offense ever to hail from Great Britain. Hence the British flag draped on his shoulders as the confetti flew after Philadelphia’s gripping 41-33 win over New England in a circus of a game in Minneapolis. This also marks the third straight year a Boise State product has been on the winning side, as Ajayi joins the Patriots’ Shea McClellin last year and Denver’s Matt Paradis in 2016 (of course, those other two guys were native Idahoans, not Brits). Here’s an Idaho tie you may not have known about: one of the dancers right behind Justin Timberlake during his halftime performance was Max Nguyen, a Timberline High grad.

Ajayi played well in Super Bowl LII when he had the chance. Maybe it was the lingering effects of an ankle injury that kept him out of practice 10 days ago, or maybe it was just the Eagles’ game plan. But Ajayi carried the ball just nine times for 57 yards (three attempts for 15 yards in the second half). He busted off 10 yards on his first two totes during Philly’s opening drive, spurring NBC’s Cris Collinsworth to say, “He is a violent runner—he is a violent finisher.” In the second quarter, Ajayi broke loose on a 26-yard run. Unfortunately Nick Foles threw an interception on a tip drill at the New England two-yard line on the following play. Ajayi knows it’s a team game, and this was certainly a team win for the Eagles.

The unsung hero in Jerry Kramer’s election to the Pro Football Hall of Fame was one of the seven other people in his hotel room when he got the coveted knock on the door from Hall of Fame president David Hall. It was Kramer’s daughter, Alicia, who campaigned relentlessly on her dad’s behalf and wouldn’t let the quest die, even when Kramer wondered if it was worth it. After the initial celebration died down Saturday, attention turned to who would give his introductory speech in Canton, OH, in August. “I think it should be given by the person who busted her ass the most to make this happen,” said Kramer, referring to Alicia. According to Sports Illustrated’s Peter King, “Kramer goes through the room person by person asking if it should be Alicia. Each yes is more emphatic than the last.”

The Idaho Steelheads split with Utah over the weekend in CenturyLink Arena, unable to deliver Saturday night for one of the most popular Steelies of all time on the night the club retired Scott Burt’s No. 12 jersey. Idaho was able to withstand a three-goal barrage from the Grizzlies in the second period when Cole Ully tied the game with a tally early in the third. But Utah scored twice down the stretch (including an empty-netter) for a 5-3 victory. The Steelheads did weather the storm Friday night after the Grizzlies scored the first two goals of the game, storming back for a 4-3 win.

Back to hoops—Idaho is peaking at the right time. The Vandals have won six of their last seven games after dominating Sacramento State 81-58 Saturday night. They’ve also won six conference road games for the first time since Idaho’s Sweet 16 team in 1992. College of Idaho’s winning streak has reached 11 games following a 76-47 win over Northwest. Gibson Berryhill was cookin’ with bacon, drilling five second-half three-pointers and scoring a career-high 17 points. The Coyotes picked up their 20th win of the season Friday with a 78-58 victory over Evergreen State. And the only good news for the Boise State women Saturday was Riley Lupfer, who hit five three-pointers and broke the school record for treys in a season with 83. Otherwise it was an ugly 77-54 loss for the Broncos at UNLV.

James Webb III has his ultimate box score breakthough, scoring his first NBA points Friday night in the Brooklyn Nets’ 102-99 loss to the L.A. Lakers. Webb nailed a three-pointer to do it, something the Nets have apparently encouraged from the former Boise State star. In five games with Brooklyn’s G-League team in Long Island before his call-up, Webb took 53 shots, and 45 of them were from beyond the arc. He took another step yesterday, this time on the boards. In a 109-94 loss to Milwaukee, Webb pulled down five rebounds in just 15 minutes—three of them on the offensive end.

A birthday oddity as former NFL quarterbacks and teammates Roger Staubach and Craig Morton are born on the same day one year apart. Staubach (with Navy) and Morton (with California) were each Heisman Trophy candidates in 1963. Staubach won it. Then Staubach succeeded Morton as starting quarterback with the Dallas Cowboys in 1971—and beat Morton in Super Bowl XII in 1978 when the latter was the Denver Broncos’ starting QB. Roger Staubach is 76 years old today; Craig Morton is 75.

Four months away, almost on the button 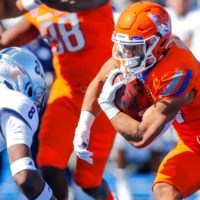