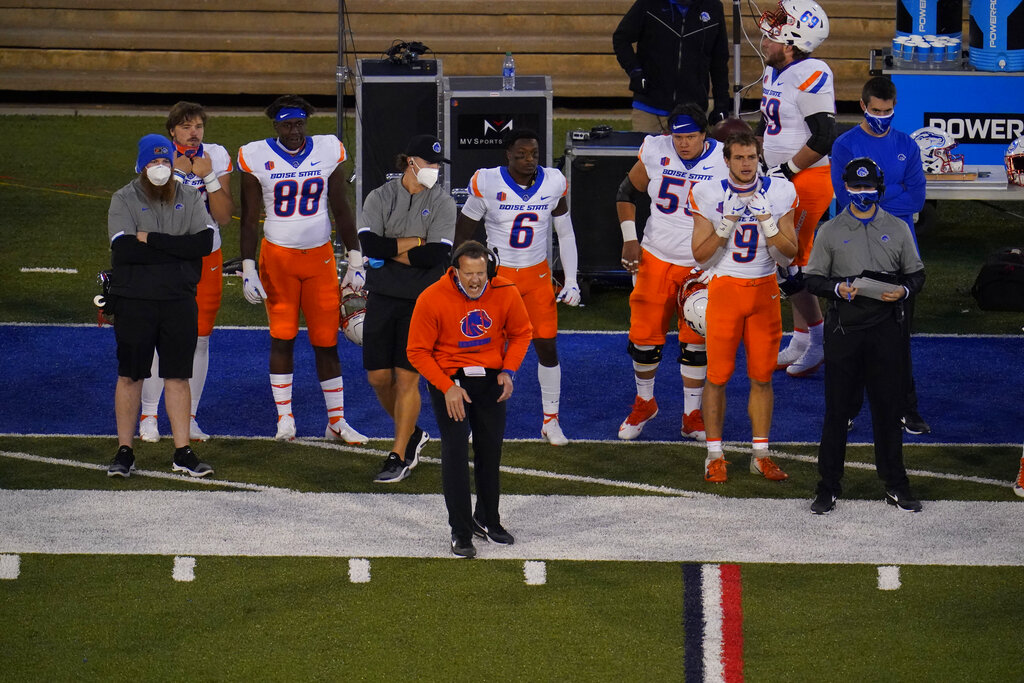 BoiseDev.com and the Idaho Press have uncovered a smoldering fire. Following a Mountain West call in September after the league had voted to postpone the season, Boise State coach Bryan Harsin went off in an email to university president Marlene Tromp and then-athletic director Curt Apsey. BoiseDev discovered it through a public records request and shared it with the Press. Wrote Harsin: “That leads into the conference conversation that we need to address again and for as long as it takes to put a plan together to move. NOW is the time! The longer it takes the longer we stay in the MW. I am 1000% convinced we need to make this move for football and if that means other sports too in the long run it will be what’s best for this University.”

REMEMBERING THE FIRST ROUND

Here’s a refresher course on Boise State and what is now the American Athletic Conference. On New Year’s Eve 2012, a little more than a year after announcing the move of its football program to the Big East, the Broncos finalized a deal to remain in the Mountain West. During 2012, the Big East had lost Rutgers to the Big Ten, Louisville to the ACC, and seven non-football Catholic universities to a new conference they planned to form. The Big East also saw its automatic-qualifying spot in major bowls disappear with the implementation of the CFP system in 2014. The Broncos, meanwhile, were able to separate their home games in Mountain West TV negotiations, as well as spur the league to institute a bonus system for national TV appearances. Boise State’s fellow Mountain West schools resent that to this day.

It was the best move at the time, as the watered-down Big East ceased to be a step up, and the move of Boise State’s other sports to the Big West just did not feel good. So what has changed in the past eight years? Yes, the American has become the premiere Group of 5 conference in football. But the Big West is a sentence to oblivion for Boise State’s other sports. I agree with risk-taking. But throwing away the men’s and women’s basketball programs, in particular, is a big, big risk. BYU’s non-football sports, for example, have struggled to be relevant in the West Coast Conference, and that’s a way better place than the Big West.

Could Boise State push the American over the top and make it the “Power 6” conference it has always claimed it is? Not by itself. But what if Boise State teams up with San Diego State (like they did eight years ago), along with BYU (although it might be like pulling teeth) and, say, Air Force, and offer it up as a package deal? The Broncos, Cougars and Aztecs could give the American enough tonnage, and the Falcons would be a good fit with Navy. Then, for the sake of non-football sports—even though the geography is stretched—there could be a Western Conference in the American that would include those four and SMU, Tulsa, Houston and…oh boy, there’s no one else even that close. You can see how complicated it would be.

THIS IS WHEN WATCH LISTS COUNT

Boise State’s Kekaula Kaniho has been named one of 24 semifinalists for the Lott IMPACT Trophy that goes to the college football player who best combines athletic performance and character. The sponsoring Pacific Club selected four student-athletes each from the Power 5 conferences, plus four at-large selections. Kaniho is the only representative from the Mountain West.. Also, Avery Williams has been announced as one of 67 nominees for the Burlsworth Trophy, which is awarded to “the most outstanding football player in the country who began his career as a walk-on and has shown outstanding performance on the field.” That is Williams’ career in a nutshell.

We are one week away from college football’s early signing day, and Boise State has quietly climbed into the No. 1 spot in 247 Sports’ Mountain West rankings for the 2021 recruiting class. That was bolstered Tuesday with a commitment from Zion Washington, a 6-2, 200-pound safety from Frisco, TX. Washington received his offer from the Broncos the day before Thanksgiving and indicates he’ll sign next Wednesday. Boise State currently has 16 commits, according to 247. Washington is the second safety on the list.

By consensus, this is Leon Rice’s best team in this, his 11th season as Boise State head coach. Rice will find out if it has jelled tonight when the Broncos challenge BYU at the Marriott Center, their first trip to Provo since 2008. Will his new-look roster be at full strength? Prized addition Marcus Shaver Jr. left early in the College of Idaho game last Friday with an injury. Shaver, the junior guard who transferred from Portland, scored 34 points with 13 rebounds over Boise State’s first two games in Texas. His five steals were a factor, too. The Broncos have forced 61 turnovers through three games, including more than 20 in each of the past two games. It’s the first time the Broncos have done that in back-to-back outings 10 years.

Despite BYU’s addition of 7-3 center Matt Haarms, the graduate transfer from Purdue, former Rocky Mountain star Kolby Lee is still contributing for the Cougars. Lee is getting less than 13 minutes per game but is averaging 5.3 points and 2.2 rebounds. The 6-9 junior forward started in last year’s game between these two teams, the Broncos’ 72-68 overtime victory, while Yoeli Childs was out on an NCAA suspension. Lee scored seven points with seven boards.

December 9, 1965: In one of the worst trades in baseball history, the Cincinnati Reds deal slugger Frank Robinson to the Baltimore Orioles in exchange for pitchers Milt Pappas and Jack Baldschun and outfielder Dick Simpson. Robinson would go on to win baseball’s Triple Crown in 1966, leading the Orioles to their first world championship. He is still the only player in history to be named an MVP in both the National and American League. And in 1975, Robinson became the first Black manager in the majors with Cleveland. He was inducted into the Hall of Fame in 1982.

Brett Rypien: Six figures is not the worst thing that could happen