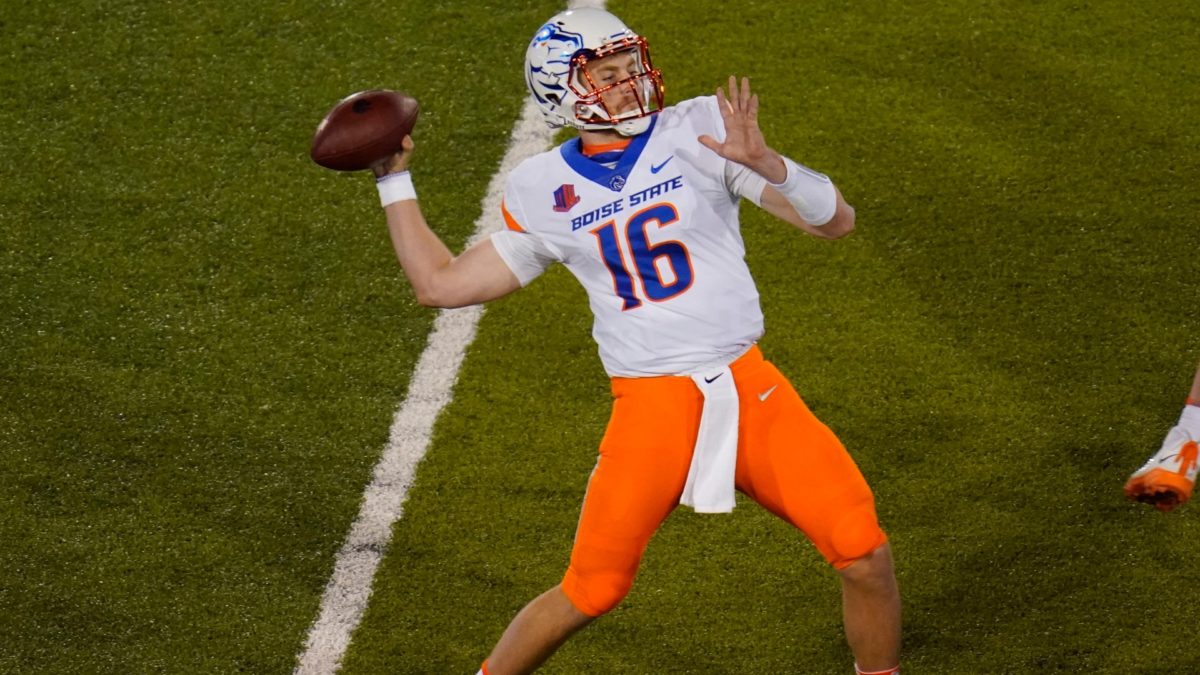 The second Boise State name to hit the transfer portal (the first was offensive lineman Kyle Juergens) is not surprising. B.J. Rains used his new Bronco Nation News platform Wednesday to break the Jack Sears story. After seeing limited action—to put it lightly—playing just a few series over four games during the regular season, Sears will use his one year of remaining eligibility elsewhere. The USC transfer had a chance to break through last year when Hank Bachmeier was sidelined by COVID protocols, going 17-of-20 for 280 yards and three touchdowns in a Halloween win over Air Force. Who knows what might have happened had Sears not been injured in the first quarter the following week against BYU? But he didn’t get back on the field again in 2020, and Bachmeier beat him out again in fall camp.

GREEN MOVES UP A NOTCH

The move by Sears elevates true freshman Taylen Green to the No. 2 spot behind Bachmeier for Boise State’s bowl game. And because Green has appeared in only two games this season, he can play in the bowl without it wasting a year of eligibility. The Broncos had packages for Green in the Utah State and Fresno State games, and they produced five carries for two yards. We haven’t had a chance to see Green’s highly-touted arm yet. He meant to attempt a pass at Fresno State a month ago but was sacked before he could get it away. One final thought on Sears: I wonder if he watched San Diego State’s challenges at QB over the last two seasons (last Friday notwithstanding) and thought about his decision to reneg on a commitment to the Aztecs after he left USC. Sears could have thrived there.

San Diego sportstalk host Jon Schaeffer tweeted this Wednesday: “San Diego State’s win over Boise State on CBS last Friday had 1.95 million viewers, more than Georgia-Georgia Tech on ABC (1.947 mil) and Florida-Florida St. on ESPN (1.629 mil).” Those are big numbers, bigger than anything the Broncos would get on ESPN2 or FS1 (CBS Sports Network goes without saying). Kicking off at 9 a.m. Pacific is no big deal when you’re talking an audience like that.

‘TANK’ READY TO CRANK IT UP

At long last, No. 90 is expected to suit up again for the Dallas Cowboys. Former Boise State star DeMarcus Lawrence is set to return for the Cowboys tonight against New Orleans. It’s been a long time since Lawrence started the season with a bang, forcing a fumble in the season opener against Tampa Bay. But in practice the following week he broke a bone in his foot, and he’s been out since. “Lawrence has had a good week,” Jones said on Dallas radio station 105.3 The Fan. “You’ll see him this week in New Orleans. My goodness, what a difference a player like that can make. Of course, he’ll have to get his game going once he gets back in here.”

MATTISON IS NEXT MAN UP AGAIN

Despite multiple reports to the contrary, Minnesota coach Mike Zimmer says star running back Dalvin Cook did not tear his labrum when he injured his shoulder last Sunday in the Vikings’ 34-26 loss to San Francisco. Zimmer also calls Cook day-to-day, while most observers say he’ll be out for the next two weeks. The smart money says Alexander Mattison gets the call this Sunday against Detroit. The former Boise State star is up to the task. When Cook struggled with an ankle earlier in the season, Mattison got two starts, rushing for 225 yards and adding 99 yards receiving in those games. Versus the 49ers, Mattison rushed for 21 yards on seven carries, but he did score his second touchdown of the season (the first one on the ground).

Where does Boise State coach Leon Rice go from here with his starting lineup? Rice shook things up Tuesday night by starting Tyson Degenhart in place of Devonaire Doutrive against Saint Louis, and the results were positive. Degenhart, the true freshman from Spokane, posted 11 points, six rebounds and three blocked shots in 37 minutes. In the final minute of regulation, he notched his third block and then dropped in the shot that tied the game and sent it into overtime. Degenhart was the first Boise State freshman to block three shots in a game since Chandler Hutchison in 2015. Doutrive played only 13 minutes against the Billikens and scored one point.

STEELIES ALUM IS A STAR

Former Idaho Steelheads goalie Jack Campbell has been named one of the NHL’s Three Stars of the Month for November. Campbell led all NHL goaltenders with nine wins and tied for first with three shutouts, helping Toronto go 12-2 during the month. It was the Maple Leafs’ winningest calendar month in franchise history. Campbell played parts of two seasons in Boise from 2014-16, going 19-7-5. He’s now in his seventh NHL season. The current Steelies, meanwhile, are headed out for a two-game series against the Kansas City Mavericks this weekend.

December 2, 1961, 60 years ago today: It didn’t mean much that day, but it does now. Rookie coach Dean Smith of North Carolina wins his first game with an 80-46 smashing of Virginia. It was opening night in a season that would see the Tar Heels go 8-9. But that would be the only losing season in Smith’s 36 years of coaching at North Carolina. He won 879 games and was the winningest coach in college basketball history when he retired. Smith is now seventh on the all-time list. 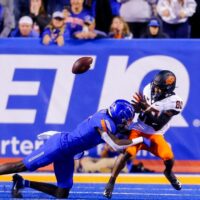 It depends on who’s counting