What is making the Boise State offense click with a third-team quarterback calling signals? Coach Bryan Harsin noted something about Jaylon Henderson at his Monday press conference that tells us a lot. “You see him out there—he’s got a really good vibe, and its contagious,” said Harsin. That’s the answer. His vibe. The Broncos are gravitating to it. It’s more than just leadership. Henderson has become a happening among his teammates. Not all is perfect, as Henderson has completed less than 56 percent of his throws. But Boise State is finishing drives. For the season, Henderson has seven touchdown passes against one interception, and his pass efficiency rating is 156.9. If he had played enough games, that would be tops in the Mountain West.

The chemistry on this Boise State squad has carried it through some trying times this season and has helped it rally from deficits in six of its 10 victories. It was on full display in the fourth quarter of the win at Utah State last Saturday when senior safety Evan Tyler, whose promising career has been turned inside out by ACL injuries, made his first career interception. Tyler was mobbed by teammates, and suddenly there was a mass of humanity parading down the field along the Broncos sideline. How they avoided a celebration penalty, I’ll never know. Harsin was kind of surprised, too. An official came over to him and gave him “the look.” Said Harsin, “I tried to talk him out of throwing a flag, and let (Tyler) enjoy the moment.”

CHALLENGE NO. 1 AT CSU

Boise State faces the most feared receiver in the Mountain West on Friday. Colorado State’s Warren Jackson is 6-6, 215 pounds and leads the conference with 115 receiving yards per game. Jackson has 69 catches for 1,035 yards and seven touchdowns, and he can go up and get it. He’s the latest in a long line of star CSU receivers, as Michael Gallup is tearing it up for Dallas right now and Preston Williams was turning in a solid rookie season in Miami until a season-ending knee injury 3½ weeks ago. Rashard Higgins and Bisi Johnson are also in the NFL. So which Bronco gets to defend Jackson in Fort Collins? The natural choice would be Jalen Walker after the big game he had at Utah State. But consider true freshman Markel Reed, who got a lot of prime time snaps in Logan. Both players are 6-feet even.

NO STYLE POINTS IN THE CFP

Cincinnati and Boise State were mirror images for a while, squeezing out narrow conference victories. Things haven’t changed for the Bearcats, who nosed out Temple last Saturday 15-13. But the Broncos have moved into rout mode the past two weeks. Nevertheless, nothing changed in the Group of 5 race Tuesday night in the College Football Playoff rankings. Memphis is still No. 18, Cincinnati is still No. 19, and Boise State is still No. 20. Other Thanksgiving week housekeeping: the Broncos’ Curtis Weaver has been named a semifinalist for the Lott IMPACT Trophy, and to the final watch list for the Ted Hendricks Award. Weaver is currently third in the country in sacks with 13.5 and sixth in tackles-for-loss with 16.5.

MORE OF THE UNKNOWN FOR THE YOTES

It’s hard to gauge what College of Idaho will face when it takes on Grand View of Iowa Saturday in the quarterfinals of the NAIA Playoffs. The Vikings are coming off a 31-30 squeaker over Concordia of Michigan. You’d think weather would be a factor on Thanksgiving weekend in the Midwest, but the forecast for Des Moines Saturday says partly cloudy with a high of 53—a lot like it was at Simplot Stadium last Saturday. As for the Yotes, they’ll be bringing the school’s first-ever conference Offensive Player of the Year—any conference—as quarterback Darius-James Peterson nabbed the Frontier Conference honor Tuesday. Peterson will be the Frontier’s nominee for NAIA Player of the Year. Mike Moroski was also named Coach of the Year, the first such honor at C of I since Sam Vokes in 1953.

Former Rocky Mountain star Nick Romano was one of two first-team All-Big Sky players out of Idaho as the conference unveiled its postseason honors on Tuesday (the other was linebacker Christian Elliss). Romano, a true freshman, made it as a return specialist after finishing second in the Big Sky in kickoff return average at 27.0 yards per runback. Romano’s biggest moment came against Weber State, when he ran back the first kickoff return for a touchdown by a Vandal since 2012. And how about this? With his 154-yard performance last Saturday at Northern Arizona, Romano ended up leading the Vandals in rushing this season with 498 yards.

The malady that plagued Boise State against Oregon, UC Irvine and BYU saw some healing in last Saturday’s triple-overtime win at Pacific. Yes, the Broncos drained some three-pointers, going 11-for-23 from deep against the Tigers. Trend or aberration? Boise State will find out when it hosts UNC Wilmington Friday night in ExtraMile Arena. There’ll be no Northwest homecoming for former Washington State Cougar Carter Skaggs. He was a graduate transfer with UNCW and had played in all seven games this season, but Skaggs left the Seahawks program on Monday. UNC Wilmington is 5-3 after annihilating Division III Emory & Henry 122-66 Tuesday night.

It was a Riley Lupfer kind of night in ExtraMile Arena. Boise State’s senior star tied a career-high with seven three-pointers and netted 23 points in a 76-67 victory over Utah Valley Tuesday night. Just back from Sunday’s 98-82 loss at No. 8 Louisville, the Broncos struggled with the winless Wolverines early. But Lupfer nailed six of her seven treys in the second half, and her teammates busted off an 11-0 third-quarter run that gave Boise State the lead for good. Jayde Christopher threatened triple-double territory with eight points, eight rebounds and 10 assists. The Broncos visit TCU on Sunday.

STEELIES TRY TO REEL IN THE RUSH

The last time the Idaho Steelheads saw the Rapid City Rush, they were on the short end of a sweep in South Dakota. The Rush visit CenturyLink Arena for the first time this season tonight to open a three-game series, and the Steelheads hope they can milk some momentum from their own sweep of Kansas City in Boise last weekend. The Steelie in the spotlight right now is Will Merchant, who scored the winning goal in last Saturday night’s overtime thriller against K.C. The 25-year-old forward from Eagen, MN, is in his fourth season with Idaho and leads the team in goals with nine.

This Day In Sports…brought to you by EVAN’S BUILDING CENTER…knowledgeable, convenient and local!

November 27, 2004, 15 years ago today: With six inches of snow having been cleared off the field at Mackay Stadium, and Boise State fans literally outnumbering Nevada fans, the Broncos proceed to pummel the Wolf Pack 58-21 to complete their first undefeated regular season. Jared Zabransky threw for three touchdowns and Boise State scored three more on the ground to set a season rushing TD record with 46, as the Broncos notched their third straight WAC championship. 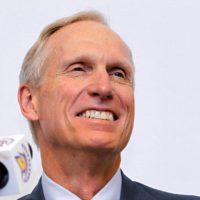