Here’s one issue if Boise State doesn’t land a bid to the NIT. Utah State’s Sam Merrill will have at least one extra game to play, and the record that has served as the signature accomplishment of Justinian Jessup’s senior year with the Broncos, career three-pointers in the Mountain West, will be in jeopardy. Jessup stands at 325 threes after making two in the conference semifinals versus San Diego State. Merrill nailed six against those same Aztecs in Saturday night’s championship game and now has 319 for his career. Could he make six more in an NCAA Tournament game? Certainly he could. Merrill is finishing his career with a flourish—now averaging 19.7 points per game and shooting 41 percent from beyond the arc. He was, of course, the Mountain West Tournament MVP.

If the NCAA Tournament selection committee puts any stock in the traditional polls, San Diego State is looking like a No. 2 seed next week. That would mean a Sweet 16 at Staples Center in L.A., provided SDSU gets that far. The Aztecs dropped one spot to No. 6 on both lists Monday after its defeat in the Mountain West title game, leapfrogged by Florida State in each case. In Jerry Palm’s Bracketology at CBSSports.com, Dayton replaces SDSU as one of the four top seeds. “The Flyers have dominated the Atlantic 10 and have a better overall schedule and better losses,” reasons Palm, noting that Dayton’s defeats were to Kansas and Colorado, each on a neutral floor and each in overtime.

TWO DOWN IN THE MOUNTAIN WEST

The first Mountain West basketball coaching casualty of the season was not Allen Edwards of Wyoming, but Dave Pilipovich of Air Force. The Falcons fired Pilipovich Monday after a seventh consecutive losing season. It’s tough to coach basketball at a service academy, with the recruiting advantages that are built in at other Division I programs. Philipovich went 110-151 in eight-plus years in Colorado Springs, though, and was just 12-20 this season with a senior-laden team. Lo and behold, Edwards was next to go later in the day, despite the Cowboys’ nice run in the MW Tournament. Edwards went 60-76 in four years—17-48 the past two seasons.

PLENTY OF TIME FOR PRACTICE AND PREP

The Boise State women are in the midst of a long wait to find out who they play in the NCAA Tournament—the selection show still isn’t until next Monday night. They won their Mountain West championship last Wednesday a week earlier than usual, with the conference tournament being moved up a week due to a huge convention right now in Las Vegas. This will be the Broncos’ fifth NCAA Tournament in the past six years, and this one may be the most satisfying, since they almost looked dead in the water a month and a half ago. And it’s the last go-round for, among others, seniors Riley Lupfer and Braydey Hodgins, who went an amazing 12-0 in their careers at the Mountain West Tournament.

Idaho and Idaho State know their opponents now in the quarterfinals of the women’s Big Sky Tournament today at CenturyLink Arena. U of I draws Portland State, and the Bengals take on Southern Utah. The Vandals are 20-9 and bring in two former Treasure Valley prep standouts, Isabelle Hadden out of Boise High and Janie King from Eagle High. Hadden has started just two of Idaho’s 29 games and is averaging just 12.7 minutes this season, but she’s the team’s fifth-leading scorer at 5.4 points per game. King is logging 7.7 minutes per game off the bench and is averaging 3.6 points. She wears No. 22, same as her dad Brian did 30 years ago while firing up three-pointers for Boise State. On the men’s side, Idaho and Idaho State both play first-round games Wednesday afternoon.

ONE OF MANY BRONCOS TO WATCH

A year ago, Boise State had to replace wide receivers Sean Modster and A.J. Richardson as spring football was getting underway. The Broncos weren’t worried, though, as Khalil Shakir and John Hightower ascended seamlessly into the feature spots. This spring, Hightower is gone, but Shakir remains, and his supporting cast could be as strong as ever. Beyond returnees such as CT Thomas and Octavius Evans, there are redshirts people tend to forget about, like Shea Whiting, Khyheem Waleed and Trevor Cole. Whiting seems to have the measurables to fit Hightower’s role. He was 2019 Offensive Scout Team Player of the Year (that’s your first clue). Whiting also put on 17 pounds since his listing on last year’s roster and is now 6-2, 201 pounds. That’s actually more Matt Miller-like.

MERRITT AND THE BAYHILL MOSH PIT

Catching up on Troy Merritt—the former Boise State star must have felt like he was playing at SpurWing In January. And maybe that was an advantage in the Arnold Palmer Invitational at Bayhill. The cold and wind made it very un-Orlando-like, and the entire field struggled. Merritt shot a pair of five-over 75s in the final two rounds, but he still tied for 24th and made $72,424. Only one player shot under 70 in the weekend rounds, and only four golfers bettered par for the tournament.

Four times Monday night, the Boise State baseball team rallied from deficits to tie Niagara or take the lead. But the Purple Aces put the Broncos in a hole they could not escape with a three-run ninth inning and won 13-10 at Memorial Stadium. Five errors did not help Boise State’s cause. Shortstop Michael Farman went 3-for-5 for the Broncos, and left fielder Michael Hicks was 3-for-6. The second game of the three-game series is tonight.

YOTES KNOW HOW TO WIN

College of Idaho is set for Wednesday night’s first round game against Northwestern of Iowa at the NAIA Division II Championships in Sioux Falls, SD. These Coyotes have a ton of victories under their belts—two of them, both Idahoans have surpassed the 100-win mark during their playing careers, establishing a new record with every C of I win. Jake Bruner of Cottonwood is 109-24 in his Yotes career, and Centennial High grad Talon Pinckney boasts a 108-23 mark. Those are wild numbers, but when your team peels off three straight 30-win seasons, as College of Idaho has done, it happens.

March 10, 1985: Dallas coach Dick Motta, the favorite son of Fish Haven, Idaho, becomes the fourth coach in NBA history to win 700 regular season games when his Mavericks defeat the New Jersey Nets, 126-117. He joined NBA coaching greats Red Auerbach, Jack Ramsay and Gene Shue as members of that exclusive club. Motta cut his coaching teeth at Grace High School—where he won a state championship in 1959—and later at Weber State. Grace made another state title game Saturday night, falling to Ambrose Academy in the 1A Division I final. 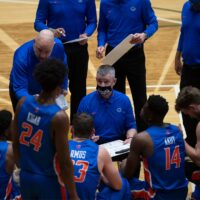 Rams trying to shake the albatross 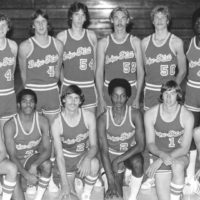