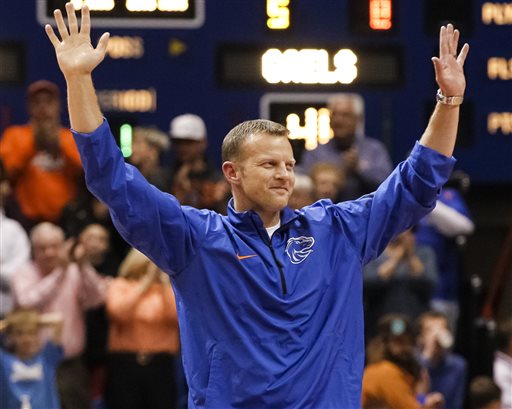 The first tweet that we know of appeared Tuesday afternoon. “Sources: Auburn is narrowing in on hiring Boise State’s Bryan Harsin as its next head coach. A deal is expected soon,” posted Pete Thamel of Yahoo Sports. That set off a storm of Google searches. And lo and behold, a few hours later the deal was done. Harsin is headed for the Tigers after seven seasons and a 69-19 record at his alma mater, with three Mountain West championships. While nobody thought the Arizona job was a fit for Harsin, we never seriously considered Auburn. “I’m incredibly excited and humbled for the opportunity to be at a place like Auburn University,” said Harsin in a statement. “I knew it would take a special opportunity to get me out of Boise and Auburn is exactly that, the chance to compete at the highest level.”

Harsin, of course, is not unfamiliar with the South. He left Boise State after the 2010 season to become offensive coordinator under Mack Brown. After two seasons with the Longhorns, Harsin took his first head coaching job at Arkansas State, spending one year there before coming home to take the Broncos’ top job. (Ironically, Harsin replaced Gus Malzahn, just fired at Auburn, with the Red Wolves.) Three years in that very different part of the country is not much, but Harsin’ll know which doors to knock on. This is, however, the pressure-cooked, unforgiving SEC. If Harsin likes high expectations; if he likes raising his personal bar, this is the way to do it. But Auburn’s fans are tough on coaches. Bronco Nation, as biting as it seems sometimes, is a cakewalk by comparison.

And instantly the speculation begins on a possible Harsin replacement. Chris Petersen is out of the question, but it’s been suggested that Boise State try to get him on the search committee. Excellent idea, if he’d do it. Coach Pete knows what the program needs. The first three names that come to mind are easy: the one-time Bleed-Blue Bronco Andy Avalos, the Oregon defensive coordinator, Kellen Moore (who needs no introduction), and Dirk Koetter, who got this Boise State run started at the turn of the century. But there was soon a groundswell of support on Twitter among former Broncos for Jeff Choate, the head coach at Montana State since 2016. Choate filled several roles on Petersen’s staff from 2006-11 and knows the culture. He knows big games, too. Choate’s Bobcats are 4-0 against Montana.

I mentioned the transfer portal Tuesday. That’s going to be an active spot for all college football teams the next couple of months, and there’s already a Boise State Bronco in there. And I’m not talking about Bryan Harsin. (But what happens to the portal now that Harsin is going to Auburn?) Wide receiver Khyheem Waleed is looking for a new home after going without a reception in the five games he played this fall. Waleed, a three-star recruit two years ago, was a redshirt freshman. It was an odd season in the wide receivers room. The wealth was never spread among what was thought to be a deep group. Khalil Shakir had 52 catches, CT Thomas made 20, and everybody else combined for 15.

NEVADA WAS THE HOT POTATO

Nevada’s Carson Strong lived up to his Mountain West Offensive Player of the Year billing Tuesday, leading the Wolf Pack to a 38-20 win over Tulane in the Famous Idaho Potato Bowl. Strong was 22-of-28 for 271 yards and five touchdowns without an interception. It was too much for the Green Wave. The Pack also had two running backs rush for 100 yards, Devonte Lee and Toa Taua. Nevada’s defense stepped up as well, picking off three Tulane passes after notching only three interceptions during the regular season. The Wolf Pack has finally won again on the blue turf.

UCF GETS BOPPED IN THE BOCA

If the 2021 season stays intact, Boise State will open in Orlando against UCF. The Broncos and Knights have something in common: they were both drilled by BYU this year. UCF got its whuppin’ Tuesday night in the Boca Raton Bowl, as the Cougars rolled up 655 yards—434 of it in the first half—in a 49-23 romp. They scored two touchdowns in the first four minutes and did not look back. Zach Wilson’s probable sayonara with BYU saw him throw for 425 yards and three touchdowns. The Cougars’ improvisational season ended 11-1, their first 11-win season since 2009.

‘BOWS ARE OUT OF THEIR ELEMENT

It’s habit for Hawaii to play in a bowl game on Christmas Eve. But not in Frisco, TX. With the Hawaii Bowl cancelled this year, the Rainbow Warriors are in the displaced New Mexico Bowl Thursday against Houston. The Rainbow Warriors didn’t lose any games to COVID concerns this season, finishing 4-4. The Cougars are 3-4 and have played only once since November 14, losing at Memphis 30-27. They’re better than their 3-4 record indicates. Hawaii coach Todd Graham and Houston coach Dana Holgorsen have faced each other three times at various schools. Holgorsen’s teams are 3-0 in those meetings.

BELIEVE WHAT YOU SEE

It’s hard to beat a team two times in three days in men’s basketball. But Boise State sure seems capable of a sweep of New Mexico tonight in ExtraMile Arena. For many of us, the FS1 telecast of the Broncos’ 77-53 win Monday over the Lobos provided the first chance to actually see Leon Rice’s new-look, transfer-packed team. What was evident is this group’s speed, quickness, size and athleticism. Did I miss anything? It’s significant that the Broncos are hanging their hats on defense, because that’s making things easy on offense. “We are a team that has some spurt-ability, and we started with our defense,” Rice said after the UNM game. “We exploded with our defense and rebounding and that got us running, and that led to some easy baskets and some good looks, and then boom—before you know it, it was at 20 points.”

December 23, 2015, five years ago today: Boise State produces one of the most dominating performances in its history—and in the history of bowl games—in a 55-7 rout of Northern Illinois in the Poinsettia Bowl. In a matchup of two of the Group of 5’s premiere programs, the Broncos scored 58 seconds into the game on the first of Jeremy McNichols’ three touchdowns in the game and didn’t look back. The offensive numbers were unreal. Boise State piled up 654 yards while holding NIU to just 33, the second-fewest yards allowed in Bronco history. Boise State true freshman Brett Rypien was solid in his first bowl game, going 29-of-39 for 377 yards and three touchdowns with one interception.