Now this is the way Kellen Moore fans want to see Dallas Cowboys training camp begin—with a quote like this from new coach Mike McCarthy: “I can’t say enough about the job that Kellen Moore has done. I’ve been extremely impressed.” Moore seems to have survived the blithering of the naysayers at this point. The fact he has the endorsement of quarterback Dak Prescott certainly doesn’t hurt. I harken back to Dave Southorn’s feature on Moore last September at The Athletic. “From the very beginning, when I first became a Cowboy, that was my job, to compete against Kellen Moore for the backup position,” said Prescott. “It was demoralizing to watch him anticipate throws and read the defense and see the defense as he did. It was tough; I didn’t like it. But I also admired that part of him and wanted to be that someday.”

Even the Cowboys’ fan sites are on board with the former Boise State great now. There’s this from BloggingTheBoys.com writer Cole Patterson: “Interestingly enough, if Moore had not fractured his ankle early in training camp back in 2016, we may not have been able to see Prescott unleash his talent on the football field. Now, the 32-year-old offensive mind and the 27-year-old quarterback are determined to produce one of the best passing attacks in all of football. During their first season together as play-caller and signal-caller, Prescott threw for nearly 5,000 yards, accounted for 33 touchdowns, and completed 65% of his passes. We truly saw Prescott take the next step in his development while putting together his finest season of his NFL career to this point.”

I just talked Monday about Tyrone Crawford’s return to the Dallas Cowboys after double-hip surgery in the offseason. Now the team is especially glad he’s back. The Cowboys will need the newly healthy Crawford’s versatility, as veteran defensive tackle Gerald McCoy is out for the season after rupturing his right quadraceps tendon during the first padded practice on Monday. Dallas picked up McCoy from the Tampa Bay Buccaneers in free agency this year with a three-year, $18 million contract. “Obviously it’s never fun to see a fellow D-lineman go down,” Crawford told ESPN. “Having a guy like that that you just get to know, just get to make part of the family, it’s always sad to see.”

AN ALLEGED MAJOR MISSTEP BY MAHONE

If this had happened during fall camp, it probably would have been curtains for Boise State running back Robert Mahone. With the season postponed until at least spring, a lot can happen. But Mahone is persona non grata in the Broncos football program after an arrest Monday night for domestic battery or assault enhancement in the presence of a child. Serious stuff. He already has one strike left over from 2018, when he was declared academically ineligible for the First Responder Bowl. Now Mahone is suspended indefinitely from team activities.

THE LATEST STEELIE IN THE SHOW

This is a heckuva time for former Idaho Steelhead Alex Belzile to get his skates under him in the NHL—the Stanley Cup Finals. Belzile is a Montreal Canadien, and he’s played four career games now for the venerable franchise. He collected his first assist in a 5-0 win over Philadelphia in Game 2 of the conference quarterfinals last Friday. On Sunday night, he played nine shifts in a 1-0 loss to the Flyers (Montreal trails two games-to-one with Game 4 set for tonight). Belzile was a Steelheads standout in 2014-15, scoring 69 points and 28 goals in 63 games. He turns 29 years old on August 31.

It remains to be seen how this ruling will affect Boise’s chances of hanging onto the NCAA Tournament next March (if it is played). The NCAA isn’t scheduled to take up the discussion until October. But a federal court has temporarily blocked the new Idaho law banning transgender female athletes from participating in women’s sports in the state. The NCAA has been considering yanking the tournament’s first and second rounds from Boise State’s ExtraMile Arena over the discriminatory aspect of the law. This issue first came up in early June, when a slew of athletes and advocacy groups wrote a letter to the NCAA asking that the tournament be pulled from Boise.

GRANT, A GREAT ONE, PASSES AWAY

Boyd Grant turned 87 years old Monday, and it was Monday that he died of a stroke, leaving behind quite a hoops legacy. Grant, a native of American Falls, got his first head coaching job at College of Southern Idaho in 1974. He went an incredible 93-6 in three seasons in Twin Falls, winning 49 consecutive games at one point and capturing the 1976 national junior college championship. Grant was then hired by Fresno State, and he turned the Bulldogs around, averaging 21.5 wins per season over nine years. He and the ‘Dogs were the 1983 NIT champions and made the NCAA Tournament three times (when it was more difficult to do so). Grant remains the winningest coach in Fresno State history. Based on his CSI years, he was inducted into the National Junior College Basketball Hall of Fame in 1989.

August 18, 2010, 10 years ago today: Just when the dust appears to be settling in conference realignment, word leaks that BYU would leave the Mountain West, going independent in football and joining the WAC for all other sports. Then came rumors that UNLV and San Diego State would bolt for the WAC in all sports, spurring the Mountain West to counter in the afternoon with invitations to Fresno State and Nevada. The Bulldogs and Wolf Pack accepted that evening, leaving the WAC reeling just hours after it appeared to have pulled off a historic coup. Two weeks later, BYU would indeed leave the Mountain West, announcing its non-football sports would instead move to the West Coast Conference. 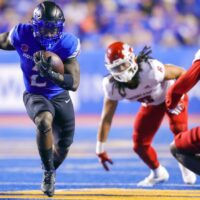 Wandering back to the Baylor game