Kristin Armstrong has done it, capturing her third women’s time trial gold medal today at the Summer Olympics. Armstrong beat Russia’s Olga Zabelinskaya by 5½ seconds on a windy, rainy morning in Rio. The adversity Armstrong had to overcome to achieve this is ridiculous. She was the oldest rider in the field by eight years (she turns 43 tomorrow). She had to endure an appeal by another U.S. cyclist, Carmen Samll, trying to bump her from the team. Zabelinskaya thought she had the race won until Armstrong, the last rider of the competition, overcame a 2.2-second deficit with a monstrous sprint into a headwind on a difficult course. Armstrong is rightfully up there with the most celebrated athletes in Idaho history.

And so ends Armstrong’s storied journey. The University of Idaho graduate didn’t become a full-time cyclist until she was 27, forced to give up triathlons due to osteoarthritis. Armstrong’s first major race was the 2002 HP Women’s Challenge in and around Boise, and she finished seventh. Two years later she was a U.S. Olympian in Athens, where she placed eighth in the road race. Four years after that Armstrong took her first gold medal in the time trial in Beijing, and another four years after that she captured gold in the event in London. In between Olympics, Armstrong won four national championships and two world titles in the time trial. She retired twice—in 2009 to have son Lucas, and in 2012 after the London Games. Armstrong came out of retirement in April of last year for this one final shot in the Summer Games.

Among Mark Schlabach’s 10 predictions for the 2016 college football season at ESPN.com: “San Diego State will finish the regular season undefeated.” Writes Schlabach, “If the Aztecs can beat a rebuilding Cal team at home on Sept. 10, then win at Northern Illinois the next week, they’ll have a great chance to finish 12-0. SDSU carries a 10-game winning streak—second-longest in FBS behind only that of Alabama—and doesn’t play Boise State during the regular season. Aztecs tailback Donnel Pumphrey is one of the most underrated players in the country, and coach Rocky Long’s defense is stingy. After going 12-0 in the regular season, the Aztecs will have to beat Boise State in the Mountain West championship game to land a spot in a New Year’s Six bowl.” If Schlabach’s accurate, that title game will be in San Diego.

Delving more into the Mountain West today—experience at quarterback seems to be undervalued in the conference in the preseason. Not many teams have stawarts back at that position (is San Diego State’s Christian Chapman a stalwart?). San Jose State does, however. The Spartans return Kenny Potter, who threw for 336 yards and three touchdowns versus Boise State in the regular season finale last November. “In spring I saw him take the next step and realy become a leader in our program,” said San Jose State coach Ron Carragher. “It’s the intangibles that really make the difference with Kenny.” SJSU was picked to finish third in the MW’s West Division. Considering Potter, tight end Billy Freeman, and a good defense, even that may be a little low.

A column by Matt Calkins in the Seattle Times is headlined, “Huskies’ season could be critical for Chris Petersen’s reputation.” There you go. Coach Pete has tried to deflect high expectations for Washington this season, but they are out there—the Huskies are No. 17 in the preseason Coaches Poll. And, as a result, “This probably is the most important season in Petersen’s coaching career,” writes Calkins. “It’s the first time disappointment could stain the golden image he created for himself at Boise State. Petersen has proven more than people in sports could ever dream of, but he hasn’t proven he can vault a major program to national acclaim.” This is the year he and UW are supposed to take that step. There is some pressure.

Here’s what I thought was most interesting, considering the debate that was all the rage nationally five years ago. Petersen was asked if Boise State’s ability to sustain its success (or not) if it was in a Power 5 conference was a legitimate question. “There’s complete legitimacy. When I was over there I had said that,” Petersen said. “At times, I knew we had a really good team, but is it different than playing (a top team) every week? Yeah it is.” If that’s true, it raises the issue of where Group of 5 schools should really be ranked if they don’t face the same competition as Power 5 teams week in and week out. When Coach Pete was in Boise, he’d say the Broncos just play the schedule they’re handed, and they do everything they can to win every game. It was all they could do. The rankings are for others to decide.

Disconcerting news from Lewiston for Washington State fans. That’s where the Cougars are conducting fall camp, and the first day in pads Monday saw star wide receiver Gabe Marks go down with an apparent leg injury. Luke Falk’s favorite target (104 catches last season) was injured during a passing drill. According to Stefanie Loh of the Seattle Times, “Marks lay on the field for a few minutes, then was helped up by the trainers. With a trainer on each side of him, he hobbled off the field and up to the medical tent.” Wazzu will be on the blue turf one month from today.

San Diego State is looking for an athletic director, and these will be tough shoes to fill. Jim Sterk was introduced as the new AD at Missouri yesterday after 6½ years with the Aztecs. There aren’t many resumes stronger than Sterk’s. In March, he was named one of the top four AD’s in the country by the National Association of Collegiate Directors of Athletics. Then he landed a spot on the NCAA Men’s Basketball Committee. “It’s absolutely critical that we keep him here,” San Diego State hoops coach Steve Fisher said earlier this summer. “I think if you look at what he’s done, the way he’s done it, the resources and how it’s happened at every level and layer, you have to say he’s the central piece to the puzzle.” Now there’s a new puzzle.

The Boise State men’s basketball team has a lot to get done during its privately-funded trip to Costa Rica (the squad leaves tomorrow). Coach Leon Rice plans to spread the minutes out for all 13 players on the excursion. “We’ll get a good eval on all the guys we have,” said Rice yesterday on Idaho SportsTalk. The scoreboard isn’t crucial, tough. “I’m looking at this trip as more of a bonding, more of a reward for the great summer they’ve had.” The Broncos will play four games against teams from Canada and Costa Rica—including the Costa Rican national team—in three days Friday through Sunday. All games will be played in the nation’s capital, San Jose.

Garrett Hampson knocked in three runs, one with a sacrifice fly and two more on a single, to lead the Boise Hawks past Hillsboro last night, 5-2. Hampson also stole a base—I mention that because he leads the Northwest League in that category with 22. The former Long Beach State standout has five swipes in the last four games. On the hill, starter Antonio Santos threw seven innings and allowed the two Hops runs, improving his record to 3-4. Julian Fernandez picked up his ninth save for the Hawks. Boise is now just one game out of first place in the NWL South Division second-half standings.

The final KTVB.com Mountain West Factoid of the Day: Attendance is a priority in the conference these days, according to commissioner Craig Thompson. The league football average in 2015 was a record low 23,769. When Boise State joined the Mountain West, it was looking up at the numbers for Air Force and San Diego State (as well as TCU). Capacity at Qualcomm Stadium is 54,000 in the Aztecs’ configuration, and at Falcons Stadium it’s 46,692, while at Albertsons Stadium it’s 36,387. But in 2015, the Broncos led the MW in attendance at 33,611 per game (92.4 percent of capacity). SDSU was second at 29,065. The next best in terms of capacity? Utah State’s Maverik Stadium was 83.7 percent full last year, with an average of 21,362 fans per game.

Boise State football graces the cover of Sports Illustrated for the first time, on the magazine’s College Football Preview issue. The theme was defense, and Bronco seniors Ryan Winterswyk, Brandyn Thompson and Jeron Johnson were the models. Not even following the memorable Fiesta Bowl victory over Oklahoma had Boise State made the SI cover. 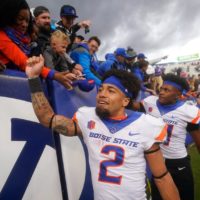 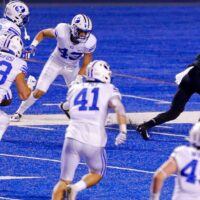 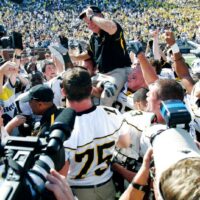