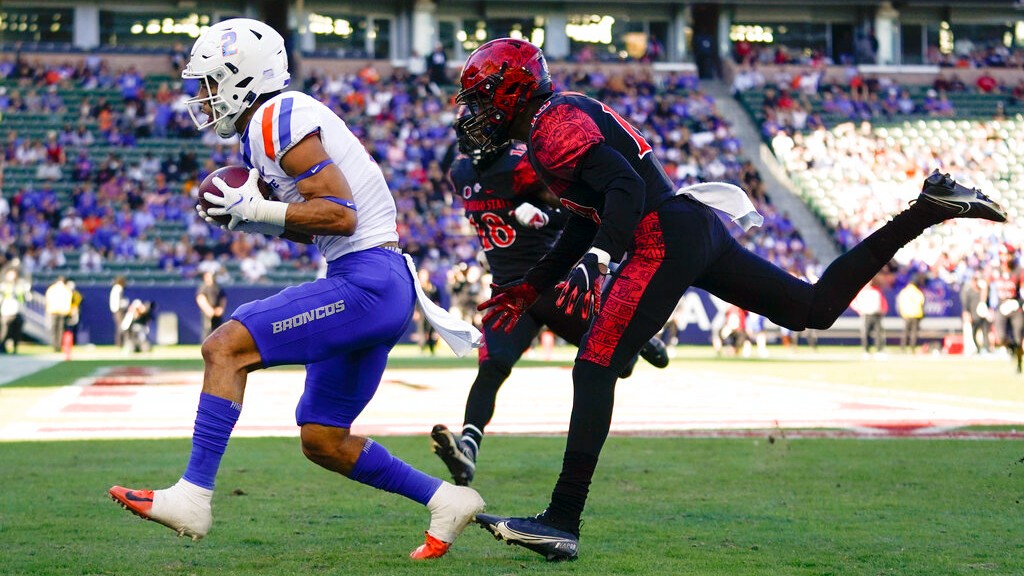 It’s apparent that some fans have fallen into “what have you done for me lately?” mode after what happened to Boise State in the 27-16 loss to San Diego State Friday.But the fact remains: this Broncos squad improved measurably from the beginning of the regular season to the end. On offense, it had a lot to do with running back George Holani. On defense, it was a buy-in by the entire unit to become more physical, and the most visible result was a big drop in rushing yards allowed. The big picture sometimes gets lost. The Broncos’ opponents went 94-50 this season, roughly an average record of 8-4. Ten of them are bowl-eligible. Boise State went 2-1 against Top 25 teams—all on the road—and were one erroneous whistle away from beating Oklahoma State, unranked at the time but now knocking on the door of the College Football Playoff.

THE GAME THAT WENT OFF THE RAILS

Were you thinking what I was thinking when Boise State built a 16-3 lead Friday morning? I actually wrote this in my notes at the time: “The Aztecs aren’t built to come back, are they?” Well, not until they changed quarterbacks and brought in Jordon Brookshire. Hard to believe that a game would turn 180 degrees on that move, but it did. Up to that point late in the first half, the Broncos had outgained San Diego State 229 yards to 105. From that time on, the Aztecs had a staggering advantage of 303 yards to 90. The “middle eight” that coaches like to talk about so much? Let’s call it the “middle eight plus 2½,” since San Diego State chewed up so much clock on its first drive of the third quarter. In that stretch, the Aztecs outgained the Broncos 201-19 and outscored them 17-0.

IT GOT TO THE QUARTERBACKS, TOO

Hank Bachmeier was swallowed up by the momentum change, too. Before the SDSU switch, he had completed 62 percent of his throws for 165 yards, two touchdowns and an interception and hadn’t been sacked yet (despite the number of hits he was taking). After that: 40 percent passing, 57 yards, another pick, and three sacks. There was an additional sack and interception after Jack Sears came in. Granted, Boise State was going against the best defense in the Mountain West. But the Broncos offensive line did not hold up. They tried everything at center, replacing Donte Harrington with a less-than-100-percent Will Farrar for a while. The effect of Jake Stetz’s absence at center (and that of Kekani Holomalia-Gonzalez all season) cannot be overstated.

PULLING OUT THE POSITIVES

You can’t talk about that rugged Phase II of the San Diego State game without talking about Phase I, because without that there would be no story. The morning started off swimmingly for Boise State, with Bachmeier making two of his best throws of the season on his two touchdown passes. The first, to tight end Kurt Rafdal, was thrown right when Rafdal broke into the clear. The second, to Khalil Shakir. was placed in the back corner of the end zone, where Shakir easily ran under it. Defensively, the Aztecs’ Greg Bell needed 93 yards for a 1,000-yard season, and he gained only 42 on 15 carries on the day. Even as things slipped away, the Boise State defense did a good job against the run, holding the Aztecs to 3.1 yards per carry.

Things fell right into place for Utah State Friday. The Aggies took care of business with their expected 35-10 blowout of New Mexico, and after Boise State’s loss, that was all they needed. USU owned the tiebreaker over Air Force, so it didn’t matter that the Falcons battered UNLV 48-14 later in the day. USU now heads to Carson Saturday for the Mountain West championship game against San Diego State. What a weird season it has been. The Aggies, despite a 27-3 loss to Boise State and a 44-17 defeat at the hands of Wyoming just a week ago (both at home), are 9-3 and one win away from the inaugural Jimmy Kimmel LA Bowl.

Former Boise State coach Bobby Dye came to the Broncos from Cal State Bakersfield. CSUB played like a vintage Bobby Dye team Saturday night, working the shot clock under five seconds on almost every possession, and the Roadrunners earned a stunning 46-39 win in ExtraMile Arena. At the other end of the floor, Bakersfield dared the Broncos to shoot three-pointers. They obliged, and they missed 26 of the 32 they tried. Overall, Boise State shot a record-low 22 percent from the field, and the 39 points were not only the fewest of the Leon Rice era, it matched the worst showing in ExtraMile Arena history. Devonaire Doutrive was the only Bronco in double figures with 15 points. Rice himself called the offensive performance “pathetic,” adding that his players “were missing high school three-pointers.”

A MILESTONE & A HAT TRICK

The Idaho Steelheads have won another series in Idaho Central Arena, taking two of three games from the Allen Americans. The only loss was Saturday night, when Allen scored twice in the first 10 minutes and held off the Steelheads 4-2. The Steelies did have a highlight moment when Will Merchant tallied on a shorthanded goal to become the sixth player in Idaho’s ECHL era to notch 150 career points. And there was a mega-highlight Friday night as Yauheni Aksiantsiuk netted a hat trick, accounting for all three Steelheads goals in a 3-2 win. Aksiantsiuk’s third goal ended the game in overtime. The Steelies are currently tied for first place in the Mountain Division.

The Boise State women’s volleyball team may not have shocked the world Friday, but it shocked the Mountain West—and made Bronco Nation feel a little better on an otherwise sour day—by taking the conference championship in a four-set win over UNLV. The Broncos became the first sixth-seed in the tournament ever to win the title. The crown propels them into the NCAA Tournament, where they face BYU, the No. 11 overall seed in the field. The Cougars are 28-1, so tall task you think? The Broncos are 24-10. The first-round match will played Friday night in Provo.

November 29, 2010: It had only been 5½ months since Boise State had announced its move to the Mountain West, but the conference had an entirely different look as the third of its “big three” in football announces its departure. TCU planned a move to the Big East, effective in 2012, following Utah (Pac-12) and BYU (independence). That effectively ended any hopes the Mountain West had of becoming a BCS conference. TCU thought the Big East was going to remain a BCS conference, but it began to crumble. The Horned Frogs were able to escape to the Big 12 before ever playing a game in the Big East.