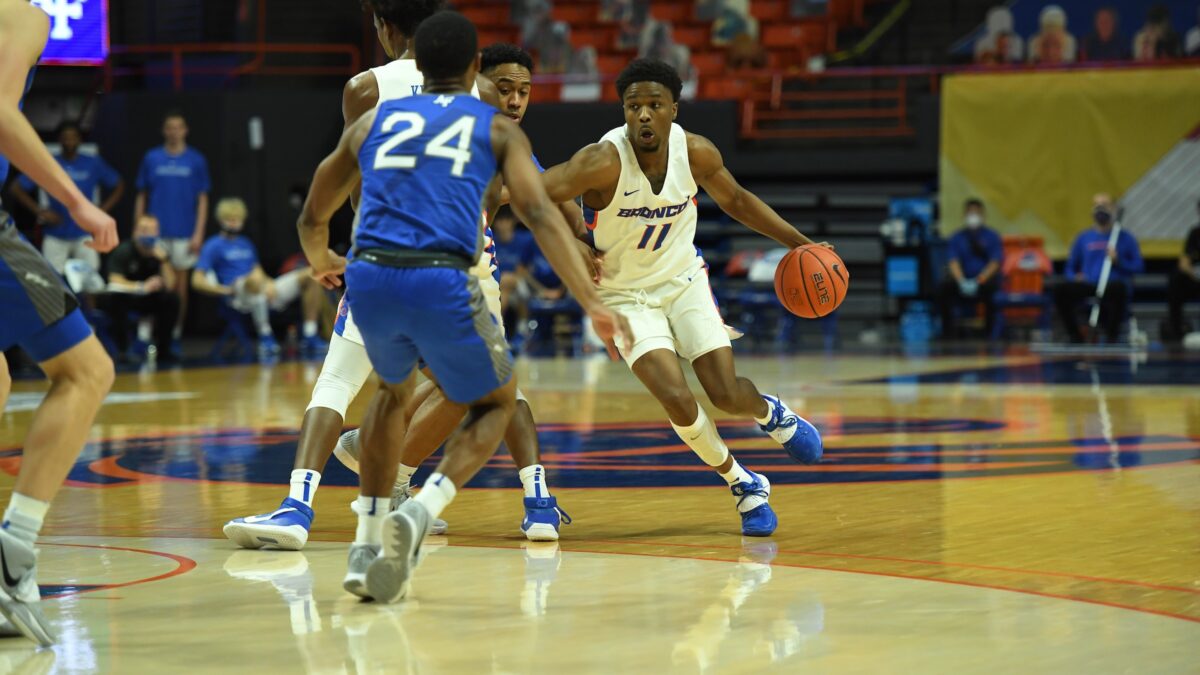 Leading up to his Boise State debut, which came even later than expected in January, the message was “wait ‘til Devonaire Doutrive joins this team.” When Doutrive put up a combined 38 points in a Broncos sweep at Wyoming two weeks in, it was like, “Away we go.” But then he hit double-figures in just one of the next eight games. Who was the real Devonaire Doutrive? At the time, there was a logjam of talent limiting his minutes. Now, with Abu Kigab out, he’s become a very important Bronco. Doutrive had a solid all-round game in the win over SMU last week, scoring 10 points with eight rebounds, four assists and three steals. Included, of course, was the game-winning bucket. Boise State hopes to milk every bit of his considerable talent to meet the challenge of Memphis in Thursday night’s NIT quarterfinals.

FURTHER DOWN ON THE BRONCOS BENCH

Boise State will be a bit shorthanded against Memphis, but coach Leon Rice’s bench usage will be interesting. It turned out he didn’t tap it that much in the win over SMU. We thought Rice might need to draw on Naje Smith and Pavle Kuzmanovic with Max Rice out in addition to Kigab. At halftime, Smith had notched a career-high five points and had made the first three-pointer of his Boise State career (as part of the Broncos’ barrage during the first nine minutes of the game). But Smith played just over a minute in the second half—and Kuzmanovic didn’t appear in the game at all. The only other reserve to play was Lukas Milner, who logged his standard five minutes in place of Mladen Armus.

Every time I see Loyola Chicago play, I’m reminded of one the most curious wins in Boise State history. The Ramblers, who play Oregon State in the Sweet 16 Saturday, were a Final Four team three years ago, with Sister Jean urging them along back when she was 98. Early in that same 2017-18 season, Chandler Hutchison’s senior year, the Broncos obliterated Loyola 87-53. The more cynical among us will point out that it was November and not March, but Boise State did it with Hutchison coming off an injury and scoring only two points. The Broncos knocked down 16 three-pointers from nine different players and outrebounded the Ramblers 41-23. Just goes to show: there’s a game like that deep down inside this team somewhere.

THE ODDS AT AUBURN

From Andy Staples’ “Dear Andy” column at TheAthletic.com: “Who stays at their current job longer, Bryan Harsin or Josh Heupel?” Not only did Harsin leave Boise State for Auburn this winter, but Heupel departed UCF for Tennessee, leaving their former teams with new head coaches when they face off on Labor Day weekend. Staples is looking at the odds for each former guy in his new locale. “Heupel should get a longer leash than any of his predecessors because he inherits the biggest mess,” writes Staples. “History says Harsin will have success at Auburn. But history also says things usually end badly at Auburn.” Staples’ kicker: “What if each coach wins 25 games in his first three seasons? Heupel would get a raise. Harsin would either get fired or start season four on the hottest of seats.”

But that doesn’t mean Staples thinks Harsin is not long for Auburn. “Harsin inherits a talented roster that should be competitive immediately, so there will be no leniency. He must win now,” writes Staples. “Heupel doesn’t have to. But because of the consistent history of Auburn coaches finding success, I’m still going to pick Harsin as my answer here. Will Harsin beat Alabama? Maybe not this year, but he’d better do it eventually or my answer here is going to be wrong.”

In this strange and shrunken Big Sky spring season, Idaho is already facing its home finale when Southern Utah visits the Kibbie Dome on Saturday. I’ll use UC Davis here to illustrate the strength of the Vandals defense this season. The Aggies, with Bishop Kelly grad Cody Hawkins having replaced new Boise State offensive coordinator Tim Plough in that post, rolled up 768 yards and scored 73 points—both school records—in a pummeling of Cal Poly last week. Idaho allowed 481 yards to UC Davis in its last game on March 6 but held the Aggies to 27 points. The Vandals limited high-powered Eastern Washington to 21 points and 339 yards in Week 1.

TOP OF THE LEADERBOARD

It doesn’t happen often. A Boise State men’s golfer won an individual championship Tuesday, taking the title at the Duck Invitational in Eugene. Hugo Townsend, the defending Idaho Men’s Amateur champ, came in six-under over 36 holes. The sophomore from Boden, Sweden, topped Washington’s Noah Woolsey by two strokes to capture his first collegiate crown. Boise State finished third in a 15-team field behind Oregon and Oregon State. The Broncos as a team have posted a top five result in each of their three tournaments this season. One other spring sports note: College of Idaho shortstop Haley Loffer was honored as the NAIA Softball National Player of the Week, the national office announced on Tuesday, the first such honor in school history. The Coyotes have won a program record 13 games in a row.

March 24, 2013: Florida Gulf Coast becomes the first No. 15 seed in the history of the NCAA Tournament to make the Sweet 16 by upending seventh-seeded San Diego State, 81-71 (Oral Roberts just became the second). FGCU had been in existence for only 15 years as a university and was in only its second year of eligibility for the tournament. Two nights earlier the Eagles had become only the seventh No. 15 seed ever to beat a No. 2 when they knocked off Georgetown, 78-68. The Aztecs’ loss, meanwhile, ensured that none of the Mountain West’s five teams invited to the Dance (including Boise State) would make the Sweet 16.