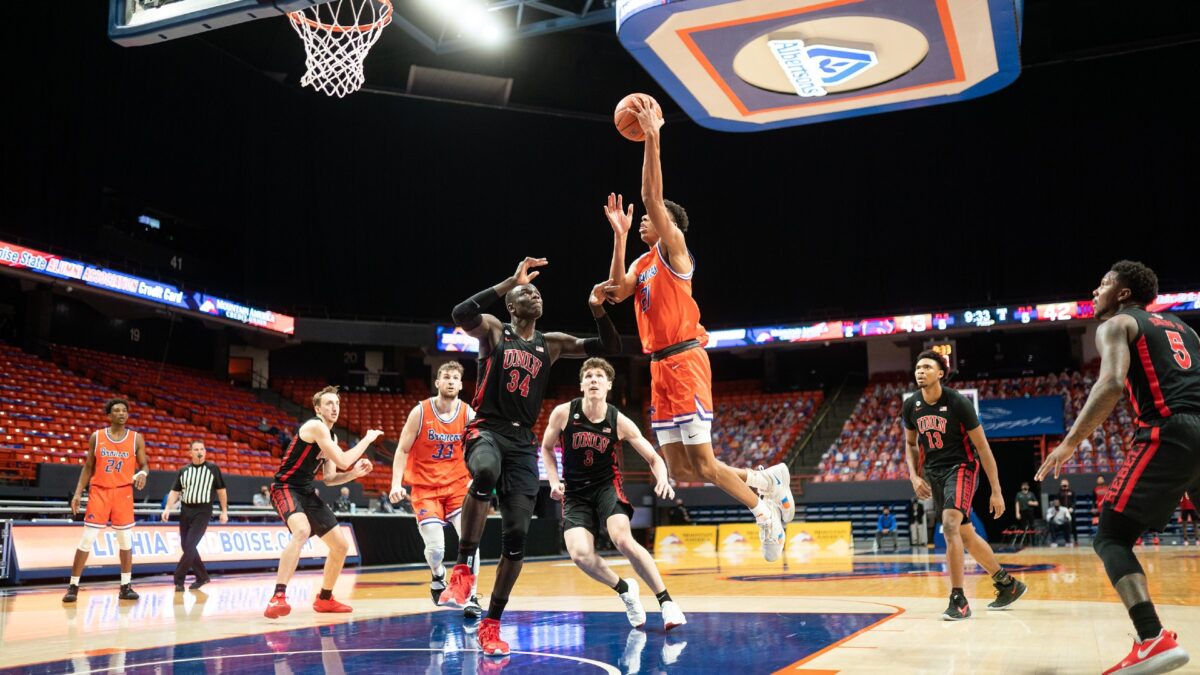 There’s been a breakthrough at the Boise State turnstiles. The cardboard cutouts will have companions. With what the university calls a “rigorous, multi-layered, health and safety plan,” approximately 900 spectators will be allowed in ExtraMile Arena for the Broncos’ final home series of the season against Utah State tonight and Friday. Central District health has reviewed the plan, which includes strict physical-distancing and mask-wearing. Fans will not be tested, but they’ll have to clear a temperature and health screening prior to entering.

With 900 fans, including the cheerleaders and 200 students, you’ll have an atmosphere the equivalent of a 5,000-fan night in ExtraMile Arena, and that will make a difference. Here’s my reasoning. This will be like the noise the Broncos football team hears at road games with a traveling throng of 5,000. It’s “you and me against the world,” and those fans make as much noise as four or five times that many in those situations. Think the 12,500 Boise State faithful among the 86,000 in attendance at the Virginia Tech game in Washington, D.C. in 2010 (on a much smaller scale, of course). They know they have to work a little harder. The Aggies have hosted 1,600 fans per game fans all season, and it has had an effect for them. This will be the first time they have played in front of a crowd on the road.

WHAT DO THE BRONCOS HAVE TO DO?

It’s nothing but a guess, but here’s my take on what Boise State has to do the next few weeks to earn an at-large spot in the NCAA Tournament. The Broncos need to win three of their four games against Utah State and San Diego State—and then make the championship game of the Mountain West Tournament in Las Vegas. That will not be easy. They’re looking up at the Aggies in the conference standings, and they’ve watched the Aztecs get back into the Top 25 this week at No. 25 in the AP Poll. USU started the season 1-3 and has gone 13-2 since. Tonight the Aggies will throw All-Mountain West center Neemias Queta at Boise State Mladen Armus. Queta is averaging 12.5 points, 9.1 rebounds and 3.1 blocks per game.

Lost in the not-so-pretty Boise State win over UNLV last Saturday is the fact that the Broncos played a good game defensively. It was especially evident at the end when Boise State had finally retaken the lead. With a 57-56 advantage, Emmanuel Akot blocked a fallaway shot by Rebels star Bryce Hamilton and then emphatically slapped the floor. And, when UNLV had a chance to win on its final possession, Devonaire Doutrive tracked Caleb Grill to the baseline and used the principle of verticality to get in the air with his hands up, forcing Grill to pop an airball. It’s that kind of effort that will be required for 40 minutes tonight against the Aggies.

Respected college football scribe Stewart Mandel, now at The Athletic, graded this year’s new FBS hires Monday. At the top of the Group of 5 is an “A” for Boise State and Andy Avalos. “Boise has maintained success for two decades by staying in the family,” writes Mandel. “The 39-year-old former Broncos linebacker and six-year assistant, rising to defensive coordinator for three seasons under Bryan Harsin, knows exactly what it takes to win at Boise.” It’s important to note that Staples also gave Utah State an “A” for its hiring of Blake Anderson from Arkansas State.

Former Boise State coach Bryan Harsin and Auburn get a B-minus from Mandel. “There’s no doubt Harsin had a successful seven-year tenure at his alma mater, going 69-19, and an eventual step up to the Power 5 was inevitable,” writes Mandel. “But SEC meat-grinder Auburn feels like a bit of an odd fit. That’s not to say he can’t install Boise’s winning culture on The Plains, but can he recruit at a high enough level to regularly beat the Alabamas and LSUs? His only comparable experience was two seasons at Texas.” That’s the key. Do not count him out, though.

From the “games on the shelf” department: Nevada has been sidelined for the second straight week, as its home series against Colorado State has been postponed. The Mountain West release cited “health and safety concerns” but didn’t specify which team may have had a COVID problem. The Wolf Pack hasn’t played since its second win over Boise State on February 7. In football, two more Frontier Conference teams, Montana Western and Montana Tech, have opted out of the spring season. That leaves College of Idaho, Eastern Oregon, Carroll College, Rocky Mountain and Montana State Northern as active participants. Stay tuned.

February 17, 1936: The birth date of a player some will still argue is the greatest running back in NFL history. Jim Brown played for the Cleveland Browns from 1957-65, retiring in his prime. Brown was the Browns’ first round pick in the 1956 NFL Draft and held every major NFL rushing record at the time of his departure. The Pro Football Hall of Famer is still the only player in NFL history to average over 100 yards rushing per game over his entire career. He later went into acting, highlighted by a starring role in “The Dirty Dozen.” Jim Brown is 85 years old today.

Kellen Moore: Ah, to be a fly on the wall

Creating their own energy in Albuquerque